The final game of a season always brings with it mixed emotions and this year is no exception. Whilst many fans will be glad to see the back of another campaign of stagnation in the suffocating atmosphere of mid table Championship mediocrity there will also be a sadness that weekend's will never quite be the same until August comes around filled with another dose of unrealistic hope and expectation. For this season's finale we were heading to Preston along with 5,500 other party animals looking to squeeze every last drop of this season's "vintage" from Chateau du MOT 2016. Delicious!

Inevitably a lot of the pre match debate surrounded the chaotic state our once mighty football club. Is this Steve Evans last game? If it is to be he can certainly take with him the most effective diet plan I've ever seen. He must have at lost at least 6 stone during his time in charge at Leeds? Which of the young guns will be auctioned off over the summer? Will the money spent on legal bills, tribunals and court cases exceed the money spent on players this summer? 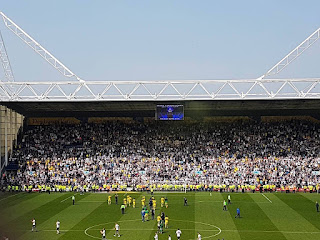 There was a carnival atmosphere inside the ground as the sold out away end, with many fans bedecked in fancy dress, lifted the decibel level to new heights. Just think what it would be like if we had anything to play for? Steve Evans made two changes to the team that lost to Charlton with Mowatt and Diagouraga replacing Botaka and Bridcutt. Young Vieira was on the bench. Sunshine broke through the light clouds as the game got under way on a perfect pitch.

Lewis Cook slipped an early ball to Wood who positioned himself for a shot but pulled his effort horribly wide. It was Preston who settled the better though with ex Leeds favourite Beckford threatening the Leeds backline trying to run off the shoulder of Bamba. As Leeds fans remember only too well he is partial to the odd offside decision though. That didn't stop a tremendous chorus of Beckford songs ringing round Deepdale from the away end. Leeds fans don't forget players who did well for the mighty whites and Jermaine certainly comes into that category.

Gallagher and Johnson started to gain control for Preston as both teams seemed to be going through the motions with nothing but pride to play for. Silvestri was commanding his box with confidence and although he was kept busy in the first 30 minutes neither side looked like scoring. With their fans urging them on Leeds suddenly picked up the pace and applied pressure on the Preston back line with some neat moves. Woods finished one with a shot wide and then Mowatt couldn't quite get over a header from a Dallas cross. Preston responded with a Garner header that sneaked over Silvestri's bar. As the game drifted to half time Cooper and Garner clashed heads. The trainers sprinted on to the cheers of the fans. Leeds won that race I am pleased to report. In typical pedantic refereeing stupidity the ref waited for the treatment to the players then dropped the ball at Silvestri's feet and immediately blew the whistle for HT? Why didn't he just blow up straight away?

As you might expect from an end of season game it wasn't the most inspiring 45 minutes of the season but the urinal philosophers were demob happy in the half time gents debate. "Thank f*** this seasons over" muttered one grumpy fan whilst another wondered "Will Vieira get a run?" "F*** it get Botaka and Antenucci on and go shit or bust" said one cavalier terrace manager. As it happened there was a substitute at half time as Wootton appeared in place of the dazed Cooper. There was collective sharp intake of breath from the away end as images of Wootton at centre half left plenty of fans mentally scarred as the 2nd period got under way.

I'd love to report that both sides threw caution to the wind and served up a spectacle for the final half of the season but it wasn't quite like that. Bamba and Wood had a couple of early chances for Leeds whilst Garner and Beckford tested Silvestri at the other end as the game drifted towards it's conclusion. Leeds fans turned to crowd surfing to amuse not only themselves but also the Preston fans. On the hour  Wood failed to convert a free header from 7 yards out as Kirkland made a simple save. Beckford departed to a thunderous ovation and then Antenucci replaced Mowatt as both teams tried belatedly to snatch all three points.

Not for the first time this season Antenucci nearly scored with his first touch as he latched onto a sweet through ball but Kirkland smothered the threat. Then with thirteen minutes of the season to go the game came to life. As Leeds attacked Murphy chased a ball to the bye line where Kirkland needlessly chopped down the Leeds midfielder. PENALTY! The Leeds fans celebrated as if we were about to be promoted. Wood and Antenucci had a heated debate as to who was going to take it before Bamba intervened and gave the ball to Wood. The New Zealander repaid his captain's faith as he blasted the shot past Kirkland. 1.0 Leeds. Get innnnnnnnnn!

Preston threw everybody forward to try and get the equaliser. Gallagher, Doyle, Johnson and Bailey Wright all had shots that either Silvestri or Bamba cleared off the line. The away end was bouncing with MOT blasting around Deepdale as the game entered added time. Vieira had joined the fray for his debut as Leeds coasted to a victory. But wait a minute Preston pumped a nothing ball into the corner of the pitch. Wootton lumbered up to it surely to clear it into row Z............oh no he tried to beat his man but only ended up platting his legs and giving the ball away. The rest was like watching a car crash in slow motion as Hugill punished the mistake with and easy shot past Silvestri. 1.1 Absolute Bollox! Why didn't he just get rid? Typical of our season though. Way too many mistakes.

There was just time for Vieira to have a lovely cameo run past a couple of defenders before releasing Taylor but the move came to nothing and the game ended 1.1. Steve Evans led the team to the fans to take the mutual appreciation. "One Steve Evans" thundered into the afternoon sky as the not so big Leeds head coach was reduced to tears. So another season comes to a close. Taylor was my stand out player from a tepid game. Coyle, Cooper and Bamba all had encouraging games.

As we streamed away from Preston thoughts were already drifting to next August. What state will Leeds be in by then? Who will be Head Coach? Who will be sold? All questions to contemplate over the summer. At least we've got the Euro's to look forward to....................

Thanks for reading my musings this season and God willing I will do it all again next season with some juicy away games to look forward to at Burton, Villa and probably Newcastle.

PS. If want to hear me rambling on about the season tune into Radio Leeds on Wednesday at 6pm.
Posted by Andrew Butterwick at 18:32

Thanks Andrew, your blog posts have been one of the highlights of my LUFC season. Roll on August MOT.

Thanks Tony. As you say roll on August!
MOT

Thanks Andrew for another year of your fantastic blog. I read them every week and look forward to your incisive comments which can only be written by a true fan of the Mighty Whites. I feel that we need to support the team who ever is managing or playing, we would all love to have a Ronaldo playing or a Venger managing but we don't and we all have to get behind team like you.
Have a well deserved break and all your followers will welcome you back in August for the new rollercoaster ride. Hold on to your hats!!!!

Chris,
Thanks for the comments. really appreciate them. Hat firmly held on!
MOT

Thanks Andrew a must read after every match for me to really understand the views of the true fan and urinal philosopher of course! Gotta get better next season surely? MOT

Andy P,
Thanks for the comment. As Rhett Butler would say "Next season is another season"....well something like that!
MOT

Look forward every week to ur match reports..you give a real feeling of what it's like to be there .I live in Ireland and only get to,a few games a year ( this season Rotherham and Hudds at Elland Rd. Night mares both)..Thanks again for your great blog and I'm already looking forward to next season...anything can happen!!!!

Thank you yet again Andrew, much appreciated.

Many thanks for your writings through the season.

As a 75 year old with health problems and living in Kent I find it impossible to get to games now and find your blog invaluable.

Have a great summer and I'll "see" you in August.

SteveF and Anon,
Thanks for your comments. I'm glad my musings are well received by those who can't get to the games as that was the original reason I started doing them. I hope you keep healthy over the summer Steve and don't stress about all the chaos that will inevitably ensue at ER through the next 3 months!
MOT

Thanks for all the reports, always an interesting read.
Hopefully next season will be a successful one. We can only hope.
Have a great summer. MOT.

Mot love your reports! See you in August!