Tonge screamer wins it for a Diouf inspired Leeds Utd.

Bristol City away is a fixture we have enjoyed in recent years none more so than when a certain Mr Snodgrass's wonder goal set Leeds on the way to victory at a snowy Ashton Gate last year.  So buoyed by two excellent wins in the last seven days it is fair to say there was a decent amount of optimism in the car as the Happy Chocker, Quiet One and yours truly headed south.  Glorious sunshine bathed our 221 mile journey to the South West and our final destination, the Tobacco Factory, for some pre match refreshments with a gaggle of Twitterwhites.  After once again debating the virtues of the takeover/investment saga attention turned to the game and the team selection. 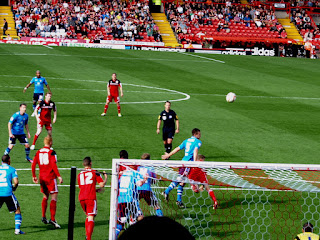 Neil Warnock had shuffled the back four to make room for Pelts to return at left back and Sam Byram to slot in at right back. Tonge, Austin, Brown and White made up the midfield whilst Becchio and Diouf were up top.  Mmmm Austin and Brown against Kilkenny............should be interesting!  Kenny had recovered from injury to resume in goal.  Diouf spent most of the warm up period having his photo taken with fans as the 2,000 travelling support cranked up the volume.  I had optimistically predicted a 3.2 triumph for the whites.

The game got under way in a flurry of very average football.  Michael Brown lifted the tension level with a clattering tackle on a Bristol player near the touchline but in truth the first 15 minutes meandered by with a plethera of mis-placed passes and very few decent chances although Taylor should have done better with a header from 8 yards out. Then both sides had half chances as first Fontaine spurned a chance inside the box for the Robins and the Becchio delayed his shot a second too long after good work by Brown.  The game was scrappy as both sides pressed each other in a tight midfield.  Stead tested Kenny with a well struck volley whilst at the other end White was starting to probe the hesitant home defence.  Ex Scunny star Woolford then headed wide from another dangerous cross.  Mmmm this game was starting to have 0.0 written all over it as the malaise on the pitch began to silence the crowd into a gentle snore.

Just before half time White once again got free on the right and skinned the Bristol full back before unleashing a teasing cross.  Elokobi was left prostrate on the turf as he tried to cut off the cross.  The immediate reaction of the crowd and players indicated a serious injury but it was a good couple of minutes before the rapid response paramedics reached the fallen player.  The unlucky Elokobi had fractured his ankle and will be out for the rest of the season.  The first half closed with the score at 0.0 and I think both teams were lucky to have nil! Not a classic.  My 3.2 prediction was looking ever so slightly ambitious as Gary and Danish readily reminded me.  "Have faith my friends" I found myself saying but not believing.  The highlight of the first half was the stewards scuttling up and down the gangways trying to keep the regulation width of access.  They do lead such an exciting life? 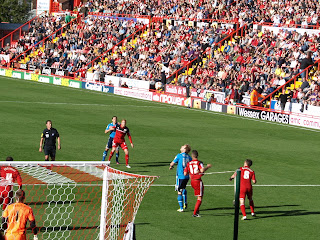 Whatever Mr Warnock said to his players at Half time it worked as Austin first hit the bar with a header and then forced a good save from the Bristol goalie all within three minutes of the restart.  Diouf was now seeing more of the ball and Byram was combining dangerously with White down the Leeds right as Leeds hit a purple patch and piled on the pressure on a shaky Bristol defence.  This was better, much better.  The turgid first half was soon forgotten as both teams realised the game was there for the taking.  It was the Leeds pressure that finally told in the 64th minute though.  Brown, having another good showing, released Byram with an intelligent ball and he sped for the bye line before pulling the ball back for Diouf to slide in the opening goal.  The 2,000 travelling army exploded in a cacophony of delighted celebrations.

The joy was short lived though as a fantastic cross from Forster on the left allowed Adomah to power in a diving header from 6 yards. 1.1.  I don't think Warnock will be pleased with the marking on that one?  "I told you it would be 3.2" I reminded Gary who just laughed in disbelief.  Bristol suddenly found another gear and threatened to upset the Leeds machine.  Desperate defending by Leeds was needed to keep the scores level.  Leeds did regroup though and attacked Bristol.  Austin hit a stinging drive which the keeper couldn't hold as White poked the rebound over the top.  A corner was given.  Diouf took the corner under a torrent of abuse from the home fans.  The now customary kisses were blown to the Robins fans who were screaming "Wanker" at him.  The Wanker took a brilliant corner that went beyond the keeper for Tonge to bundle the ball into the net.  Cue mass hysteria in the travelling hordes before we realised the ref had blown up for someone giving the goalie a hard stare as he went to collect the ball.  Well I couldn't see anything else that justified a free kick?  It mattered not a jot as a minute later Leeds were 2.1 up.  A long free kick was won admirably by the largely ineffective Becchio who headed it towards Diouf via a Bristol defender's mis-kick.  The Senegalese Stroller doesn't miss these chances and he didn't 2.1 Leeds...........get innnnnnnnnnnnnnnnn!

Leeds were now in 6th gear and looking to kill the game.  The ever improving Tonge settled it two minutes later after cutting inside two players and curling a screamer past the hapless Heaton in goal.  Delerium in the away end as the prospect of a third win in a week loomed large.  3.1 Leeds.  "Ah hmmm Gary 3.2 it will be" 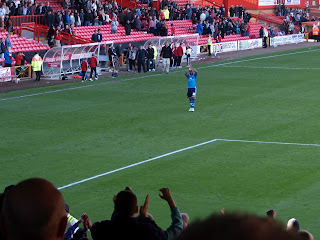 Now I didn't want it to finish 3.2 because that would mean a tense finale of which I have seen all too many of those disappointing last minutes of the game turn sour in the past.  So when Austin turned a corner into his own net in stoppage time the worry beads were out in force amongst the Leeds fans.  There was no need though as the ref finally blew after 6 minutes of nerve racking added time.  Final score 3.2 Leeds.  Gary and Danish walked away shaking their heads.  How could such an innocuous first half which had 0.0 written all over it turn into a 5 goal thriller in the 2nd period?  That's football.

Diouf was once again the architect of the Leeds victory with good support from White, Byram, Tonge, Brown and Austin.  At the back Pearce was a rock with Lees maturing with each game.  Leeds seem to be doing nicely without any money to bring loan players in?  The long journey home was sweetened by the news Spurs had also won 3.2 at the Theatre of Shite.  As the sun slowly went down as we hurtled up the M5 I reflected on a week in which we have won back to back league games with a spicy sandwich of a cup victory against Everton in between.  Mint! All of a sudden life looks good for Warnock's penniless warriors.

A trip to Bolton next followed by a home game against our bogey team, Barnsley before the international break.  Two wins would be nice wouldn't it?


Posted by Andrew Butterwick at 23:15

quality blog. even though i attend the games i look forward to reading the match reports.