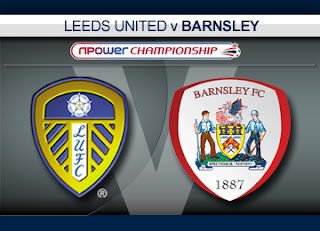 Barnsley travel to the Theatre of Hope on Saturday hoping to extend their recent stranglehold over their West Yorkshire rivals.  Last year we conceded 6 times against the Tykes and the year before an eye watering 8 times including possibly the most humiliating defeat to any of our Yorkshire rivals in recent years when we capitulated 5.2 at Oakwell.  Yes Barnsley seem to have the gypsies curse on the mighty whites a fact which doesn't sit well with anyone who happens to work or live within the vicinity of anybody with that distinctive broad South Yorkshire accent and a penchant for supporting their local team.  The Happy Chocker has that dubious pleasure working down the big black hole that is Kellingley pit.  To me it all adds to that special atmosphere that a local derby brings though. 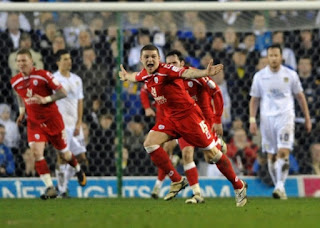 The origin of the term "Derby" for a match between two local teams is unclear with some sources suggesting it comes from the ancient Shrovetide game in Ashbourne, Derbyshire, whilst other sources connect it with the classic horse race started by the Earl of Derby in 1780.  Whatever the origin of the term a derby match has a common theme running through it whether it be the El Classico or the more down to earth clash between Exeter City and Plymouth Argyle.  Firstly Derby teams are never evenly matched. That is a fact. Their is a natural order where one team will always hold the moral high ground in terms of historical supremacy, wider success and more often than not popularity.  Remember Sir Alex Rednose referring to City as noisy neighbours as they started to challenge the old order in Mancunia?  This naturally leads to a large dose of resentment amongst the opposition fans making any victory  or better still annihilation of their "fancy dan" neighbours all the more sweet.  Everton, Man City, Spurs, Birmingham City ( with Villa) and Sunderland (with Newcastle) all fall into this category.  On the other side of the coin the fear of defeat that is created amongst fans of the traditionally stronger teams is all the more gut wrenchingly painful the nearer the date of the actual derby gets.  With all the pre match bluster and bragging amongst fans in the lead up to the game there is also a high likelihood of severe cases of indigestion after the consumption of copious amounts of Humble pie in the days after the game.  Either that or fans of the losing side lock themselves away in the house for a week to let the post match storm of ridicule die down.

Whilst plenty of fans will recognise the symptoms and consequences of a derby match some will be questioning whether our game against Barnsley is actually a true local derby?  Well here's a diagnostic guide to local derby's.  If you answer yes to at least 3 of the following 5 questions it is definitely a Derby:
1. If your team goes a goal down will the opposition fans sing "One nil in your cup final"
2. If your team loses will you avoid friends/colleagues/family who are fans of the opposition for at least a week after the game?
3. If your team wins will you actively seek out friends/colleagues/family who are fans of the opposition as if you were bloodhound tracking down an escaped convict?
4. Do you use any of these phrases in your pre match discussions, "we can't lose to these bastards" " Fred (insert appropriate name) will get both barrels on Monday if we beat this set of (insert expletive)"  "I hate local derbies"
5. You feel physically sick with worry just as the match kicks off.

So is the Barnsley game a Derby game?  In my book it is as is any game against a team from the broad acres of our wonderful county.  Thing is can we win it?  If we show the spirit and resolve that has been evident in bundles in recent weeks then  Warnock's penniless warriors should triumph.  After all we can't lose to these bastards can we?


Posted by Andrew Butterwick at 21:08

Great post! peoples opinions differ with local derbies/rivalries for example I see any Yorkshire game a derby including Middlesbrough (I'm from Redcar) and travel with Teesside Whites so theirs a lot of Leeds & Boro fans in North-Yorkshire/Teesside a lot more Leeds and Boro fans mingling around here than Geordies and Mackems, to the club Leeds United maybe it's not a derby but to a lot of fans theirs rivalry here, people say oh Middlesbrough isn't in Yorkshire but On my letters, address and sign post it tells me it is. I like to listen to people's opinions on Derbies but true derbies are with Bradford, Huddersfield & Scum for me and the sheffield clubs maybe?

Teesside White,
Thanks for the comment. I always count Middlesbrough in Yorkshire so it would come into my definition of a local derby. The ones that hurt or please the most are the ones that are nearest to chez nous!
MOT