Becchio's chip is too much to stomach for the Tykes!

With the Happy Chocker absent through family duties I had Frank and Kel on board for the trip to the Theatre of Hope to watch the mighty whites latest attempt to silence those yapping whippets from Barnsley.  Having failed to prise a win from our South Yorkshire neighbours in any of the last 6 attempts optimism wasn't exactly sky high amongst the Leeds faithful in the Drysalters pub before the game.  Rumours of yet more troubles for the long drawn out non takeover were fueled by Cuddly Ken's less than complimentary comments about his negotiating partners in the matchday programme.  I get the feeling the phrase "Warnock's penniless warriors" is going to be more apt than "Dirty Leeds, Filthy rich" this season.

As we walked down Elland Road there was an extra special buzz about the place that only a local derby can  create.  Warnock had replaced Drury with White moving Peltier to left back allowing White to play in midfield.  My crystal ball was feeling optimistic and showing a 3.1 win for Leeds.  Mmmm we will see. 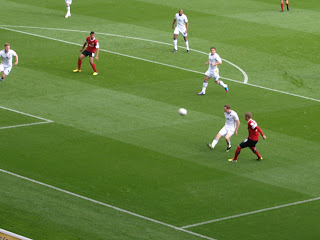 The game kicked off in bright sunshine in front of a desperately disappointing derby crowd of 22,000.  A combination of the Rhinos at OT, tight Barnsley fans and the continued reluctance of fans to support the current club management had reduced what should have been a bumper crowd. Barnsley easily claimed the early superiority as they pressed a lethargic Leeds side.  Perkins with his distinctive blond locks gave Leeds early notice with a shot over the bar before Mellis missed a golden chance from 6 yards to put the Whippet lovers in front after just 4 minutes. Not the start we wanted and it got worse as Barnsley went on to dominate the first twenty minutes. Mellis, Perkins , Harewood and Davies were all testing the resolute Leeds defence.  At the other end Alnwick hardly had a shot to save despite Becchio first trying a turn and shot after good work by White and then fizzing a header over the bar from a trade mark cross from the peerless Diouf.

The game was scrappy and littered with fouls not the sort of derby fayre to get the adrenalin pumping.  Both managers were dancing around the 4th official in mock hysteria believing their team had been massively wronged by various ref's decisions.  The game was heading for half time with the pressmen rehearsing their half time reports with words such as feisty, disjointed, few chances and tense when Lee Peltier altered the script.  Pelts has not had the best of times over the last few games so when he picked the ball up just inside the Barnsley half it wasn't exactly a signal for pulses to start racing amongst the Leeds fans.  But he suddenly changed up not one but two gears and sped towards the heart of the Barnsley defence only to be felled by a crude tackle by Foster sending the Leeds captain high in the air before landing heavily in the box.  Penalty was my immediate reaction from 125 yards away and Mr Deadman, the ref agreed.  The Barnsley players protested strongly suggesting the agricultural lunge by Foster was outside the box.  Tough shit it's a penalty!

Becchio stepped up to take the penalty and I looked firstly in horror as he coolly chipped the ball goalwards and then in delight as his audacious shot nestled gently in the back of the net.  1.0 Leeds. Get innnnnnnn! There was just time for Becchio to get a booking after an altercation with Wiseman before the half time whistle went.  I texted the Happy Chocker the good news leaving out the fact that the goal was somewhat against the run of play and Barnsley were looking dangerous.  I didn't want him worrying! 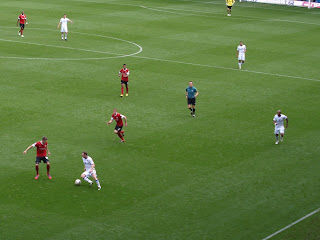 In the second half Leeds looked slightly better. Norris came onto replace Tonge who looked like he had dislocated his shoulder.  Yet another one for the already bulging casualty room but Norris slotted in well and improved the midfield area for Leeds.  Led by Brown, Austin and Byram Leeds were scrapping for every ball as they went in search of a first clean sheet in the league since the opening day of the season.  Austin stung Alnwick's fingers with a shot from 25 yard out.  On 60 minutes Kenny once again made a crucial save as Harewood tried to get Barnsley back level.  Leeds were frustrating Barnsley in what had become a game "not for the neutral" as Warnock's penniless warriors dug in for Barnsley's final assault.

Leeds never make life easy for their fans and today was no different as a number of free kicks were conceded in dangerous positions.  Paddy made a solid save from a deflected free kick as my non existent fingernails were once again attacked in the final throes of a Leeds game.  Diouf was using all his class and know how to steer Leeds through the choppy waters of the remaining minutes though.  Gray had replaced Becchio for the last twenty minutes.  Four minutes added time were played but that wasn't enough for Barnsley to pierce the Leeds defence as the home side ran out 1.0 winners.  Sweet!

It got even sweeter for me as I joined the throng of fans leaving the stadium.  The whippet lovers fans were bemoaning the fact that Peltier was outside the box when he was scythed down for the penalty so it wasn't a penalty.  I suggested to one fan that he checks the results page of the Barnsley Chronicle where he will find it clearly says Leeds Utd 1 (Becchio pen) : 0 Barnsley. Not sure why but he turned a rather nice shade of purple.

Another typical battling performance from Leeds in a very scrappy game played in a relatively subdued atmosphere.  Austin and Brown put good shifts in whilst Prince Diouf gave a regal display.  White showed flashes of class and pace mixed with his annoying habit of giving the ball away far too easily.  After the humiliation at Oakwell on New Years day this was ample revenge for Leeds.  I suspect the RSPCA will be busy in South Yorkshire tonight as reports of numerous Whippets being kicked by frustrated owners start to surface.  Somehow the more fortuitous wins always taste sweeter especially against local teams.

So Leeds enter the international break with 17 points from 10 games deposited in their League account and handily placed in 7th position.  I would certainly have taken that before the season kicked off.  Maybe Warnock's penniless warriors might just stay the distance in this very open and very intriguing league campaign?  Wendies up next on Friday 19th Oct..............live on Sky!  With 5,000 mighty whites fans making the trip to Hillsborough another night of high drama awaits.


Posted by Andrew Butterwick at 20:12

from my seat in the north east corner it was a clear penalty!

Ponte White,
That'll do for me!
MOT