After a momentous week off the pitch for Leeds United it was time to see if the new positive feeling around the club could transfer over the whitewash and onto the playing area.  The conclusion of the drawn out takeover had given everybody associated with the club a much needed boost and you could feel the extra buzz in the air as we made our way to the Theatre of Hope for the clash with table toppers Palace.  As usual the Happy Chocker and the Quiet One were with me together with brother Chris. The miserable West Yorkshire weather couldn't dampen our spirits as we discussed the new signings, exactly how much money have we got and the fact that our new owners had chosen Akbars restaurant, our end of season eaterie of choice, for their pre match meal.  Life on Planet Leeds felt good all of a sudden.  Admittedly helped by some lubrication at Wetherspoons but I was optimistic and the longer I stopped in there the more optimistic I got!

NW was bold with his team selection and put both Thomas and Tate straight into his struggling side.  Tonge and Norris started in the centre midfield berth with Thomas and Green out wide.  Becchio and Diouf were up top with Ross Mac on the bench. Lees partnered Tate in defence with Pelts and Byram at fullback. Bouyed by uber optimism I had a sneaky bet on a 2.1 win for Leeds.  Mint. 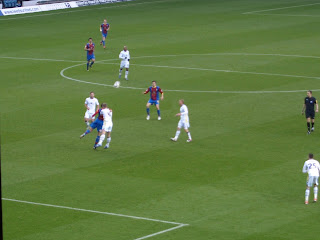 News of the takeover and renewed hope for the mighty whites had not put any more bums on seats as another disappointing crowd of just over 20k were inside Elland Road for kick off with a healthy contingent of "Nigels" following the South London team. Palace started the game as the form team in the championship on the back of a 14 match unbeaten run and also boasting the stand out player of the year so far, Wilfred Zaha. Realistically we should not have much chance but this was the new inspired and dare I say rich Leeds United............not the poor paupers who succumbed to Millwall last week.

Leeds started brightly as Norris and Becchio tested Speroni in the Palace goal.  Jerome Thomas made a couple of telling runs on the left and Alan Tate looked assured at the back shocking the Elland Road faithful by choosing to pass out of defence rather than hoof it up field.  Surely that's not allowed is it?  The first twenty minutes passed in a flash as the new look Leeds took a grip of the game.  The new Dubai based owners looked pleased in the Middle East stand as the crowd urged Leeds forward. The LUFC version of the Arab Spring had started well.  Crystal Palace are top of the table because they have a very good team and like to pass the ball quickly so once they had weathered the early storm they pressed Leeds ominously.  Zaha, full of stepovers and fancy footwork, tested young Sam Byram but the emerging Leeds star stuck resolutely to his task giving the new England international little chance to shine.  This was looking good however my initial optimism was soon to be tested as Kenny pulled off a stunning double save to deny first Jonathan Parr and then the prolific Glen Murray.

As half time approached Leeds were feeling the pressure.  Zaha went down dramatically in the box claiming a penalty as Byram stuck to him like a limpet. The ref bottled out of booking the precocious Palace talent for diving as the baying kop vented their displeasure at the Palace star as he appeared to strike Byram as he walked away.  Seems like Wilfred has already got some Premier League qualities? Petulance for one.  Half Time 0.0.

I hurried to the gents to hear the Urinal philosophers views on what was the most entertaining 45 minutes we've seen for a good few games. "Tate looks good and solid" one excited fan purred. "This is a lot better than the shite we're used to" one realist commented.  In general everyone was happy even brother Chris who had been muttering about "getting a good tonking" before the game.  Certainly the unusual air of positiveness had lifted spirits around the old stadium and inspired the team. 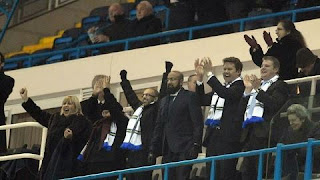 Leeds started the 2nd half attacking the kop and they soon sent their adoring fans into raptures as Becchio rediscovered his goal scoring touch as he pounced on a Green head down that the Palace defence made a complete hash of and smashed the ball home. Get iiiiiiiiiiiiiiiiiiiiiiiiiiiiiiiiiiiiiiiiiiiiiiiiiiiiiin! 1.0 Leeds Utd.  Our new owners celebrated in the posh seats the fact that their new purchase had taken the lead against the table toppers from South London.

Leeds grew in confidence as Byram continued to have the better of his battle with Zaha whilst Jerome Thomas blossomed with his understanding with Diouf.  At the back Lees and Tate (who look like twins) were solid as a rock and Paul Green was once again enhancing his growing reputation with the Leeds faithful. Palace weren't giving up without a fight though as they stretched Leeds with intelligent football but it was Green who put some breathing space between the teams when he volleyed home the 2nd from inside the box after the Palace defence failed to clear a long ball. 2.0 Leeds with 15 minutes left.  I was now in dream land.  The season that looked like going absolutely nowhere at Millwall and Burnley was now re-ignited.  Don't you just love Leeds? Palace poured forward though looking for a goal but almost fell to the ultimate sucker punch as Poleon, on for Thomas, chased down a back pass to Speroni who sliced his clearance agonisingly close to Diouf.

The last ten minutes are always tense affairs and this was no exception.  The two goal lead looked flimsy as Palace battered the Leeds back line and when Ramage finished off a cross from Dikgacoi, who had left Poleon for dead, nerves began to jangle amongst the home fans.  2.1 Leeds.  Desperate defending followed as the game went into 5 agonising minutes of added time but Leeds held on ..........just.  The final whistle was met with jubilation amongst the hard core home fans. One swallow doesn't make a summer but this one was too much for the Eagles! 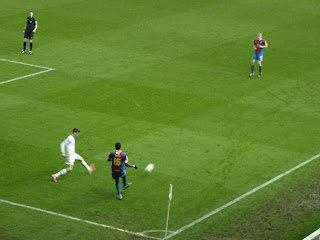 The wet,cold weather didn't register with the home fans as they streamed away from the ground with smiles on their faces.  Byram was immense keeping Zaha quiet, Tate was impressive with Lees at the back and Thomas injected some much needed pace to the Leeds attack.  The whole team looked inspired and the contrast with last week's showing was stark.  A fantastic start to the new era and Leeds' Arab Spring.  The Happy Chocker was smiling even more than usual as we treked home on the delayed 5.38pm to Selby.  That was more than the couple in first class who took exception to us sitting in "their" carriage as there were no other seats.  "I'm sure they haven't paid for first class" the snooty wife stage whispered to her hubby making the assumption that a bunch of Leeds fans didn't have enough money to buy a first class ticket.  I so nearly did my Harry Enfield impression of the obnoxious Stanley and said "I believe we are considerably richer than yow"  but I didn't.  One narrow minded selfish bigot in the carriage was enough!

Roll on Leicester on Tuesday and let's see if the Arab inspiration can continue. Dubai Whites rule!

Posted by Andrew Butterwick at 20:14