Working in North London when Leeds are playing at home in mid week presents the odd logistical difficulty. Three lengthy delays on our lovely motorway network, the M1 beat the M25 two to one, meant I was fighting a losing battle with time and distance as kick off time fast approached.  The cause of the delay at Junction 22 M1 were "animals on the road".  Were the Foxes running scared already?  Once past the last delay I had the impossible task of covering 77 miles in 60 minutes in heavy traffic so I resigned myself to missing the first part of the game and tuned into a crackly Radio Leeds to get up dates on the game. 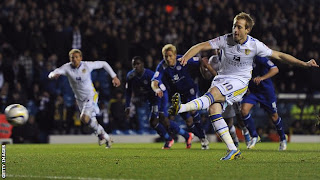 News that NW had picked an unchanged team wasn't a shock.  The team that had done so well against the table toppers on Saturday deserved another bash against third placed Leicester. Kick off time came with my sat nav still screaming 16 miles to go.  Bollox.  I couldn't even listen to commentary from BBC due to Capt Birdseye's dictatorial stance on who can and who can't broadcast from the Theatre of Hope so I was regaled with commentary on Agent Grayson's team playing at Middlesbrough.  But not for long......"there's a goal at Elland Road lets's go over to Katherine Hannah for an up date" announced Gareth Jones as my phone bleeped with a message from the Happy Chocker.  I held my breath as Katherine's dulcet tones confirmed Leeds had made a dream start with a Becchio penalty after Sam Byram had been brought down.  Get in I shouted to nobody in particular as I hurtled past Stourton.

I dumped the car in the main car park and jogged to the stand with the chant of Ohhhh Gary, Gary, Gary, Gary, Gary, Gary, Gary Speed wafting up into the Beeston sky in recognition of the first anniversary of his tragic death.  I finally took my seat with just over 15 minutes gone.  Leeds had started brightly hunting in a pack to nullify a strong Foxes side playing in typical Nigel Pearson style as they tried to squeeze Leeds at every opportunity the way you would squeeze an angry spot.  Jerome Thomas was seeing plenty of the ball as he revelled in taking on his man and use his considerable pace to upset the visitors defence.  How we've missed an alternative "out" ball other than to Diouf? You could almost imagine Mad Max back on the wing?

When Leicester attacked they found Alan Tate calmness personified at the heart of the Leeds defence with Tom Lees taking suitable inspiration from his classy partner to keep the hungry Foxes attack at bay although Waghorn should have hit the target when he pounced on a loose ball and volleyed just wide from 12 yards.  Leeds were creating their own chances though.  Becchio found himself free on the wing and for once onside before delivering a pin point ball into Paul Green's path.  His half volley brought a terrific reaction save from ex Leeds goalie Schmeichel.  Minutes later the sublime Diouf released Thomas in the box but he hesitated before a well timed challenge snuffed out the chance.  Leicester had the last chance of the first half as Waghorn hit a volley from an outrageous angle onto the bar with Kenny beaten.  Half Time: Leeds 1:0 Leicester.

The fresh wind of positiveness that the owners had brought to the club was alive and well during the interval. The two new signings have made such a difference adding much needed pace on attack and steadiness in defence a fact not lost of the faithful amongst another poor crowd of just 17,000.  We used to get more than that to watch Port Vale when we were in League 1!

Leeds started the 2nd half slowly to say the least as Leicester went scavenging for an equaliser.  All of a sudden we looked at sixes and sevens at the back compounded by Thomas appearing to pick up an injury.  Pearson made a double substitution as the giant Futacs and Lingard came on to reek havoc in the Leeds defence.  For a ten minute period it was if someone had left the chicken coop door open and a fox was running riot.  Somehow Leeds survived with a combination of stout defending, luck and bloody mindedness. Norris, Byram, Green, Tate and Lees were all going beyond the call of duty to defend the early lead.  Brown was added to the Leeds pack in place of Thomas as Leeds continued to hunt down the Leicester foxes.  Pretty it was not but with Leicester continuing to playing the squeezing game Leeds were more than content to battle hard for the upper hand.

Leicester were now pushing hard for the equaliser.  Kenny got down low to his left to keep out a hopeful shot whilst at the other end Brown finished off a good move by curling a shot inches wide of Schmeichel's post with the big Dane stranded.  The clock was now stood still as the game entered the final ten minutes with Leeds yielding possession far too easily for my nerves.  Then Leeds thought they'd sealed the win as Becchio latched onto a sweet pass from Diouf and rounded the goalie before planting the ball in the empty net but he was offside.  No surprise there?  Four minutes of added time needed heroic defending from the Leeds back four with bodies flung in front of shots and balls headed out from under the bar but Leeds hung on for a gutsy win.  Gary Speed would have liked that.

So despite driving for 5 hours and 200 miles to miss the only goal of the game I was more than happy.  The first league victory on a Tuesday night at Elland Road since we thrashed the Codheads in August 2011 was sweet knowing that we now had six points from a week I expected nothing with the tantalising prospect of beating Agent Grayson's stuttering Tesco Bags on Saturday to come.  The Leeds team hunted as a pack inspired by the two new recruits.  Norris had an industrious 90 minutes and once again Diouf oozed class every time he touched the ball.  Byram was immense at full back but Tate was my MOM.  Difficult to see Pearce getting his place back on this form?

We still need some more quality injecting into the squad but things are on the up on Planet Leeds.  We've clipped the wings of the Eagles and Hunted down the Foxes now all we need to do is terrorise the Terriers in their own backyard on Saturday to complete the most unlikely of perfect football weeks for the mighty whites.  Life is never boring as a Leeds fan.  Roll on Saturday.

Posted by Andrew Butterwick at 23:49

Always enjoy your reviews Andrew, thanks, keep them coming
James