Bright sunshine with a winter nip in the air was the background canvas as we headed south for the lunchtime kick off with Nigel Clough's Rams. Driven by a winning run lasting three glorious matches confidence was high on Planet Leeds.  In cyberspace the mighty whites keyboard warriors were all predicting this was the game when we would end the Rams 7 game winning streak against Leeds and even in the car the super pessimist, Brother Chris, was gushing positiveness and forecasting a 2.0 win.  Caught in the slipstream of uber optimism I plumped for a 3.1 victory.................. for Leeds.  The Happy Chocker was the one to throw   a word of caution into the proceedings "Be careful Leeds United have a nasty habit of letting you down when you get too optimistic".  "Mmmmm not today I've got a good feeling about this one" I rashly retorted. 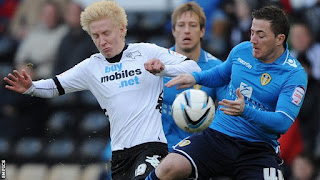 After negotiating the faulty turnstiles we tucked into the pre match refreshments helped by the tale of Mr Wrigglesworth's yomping from one side of Derby to the other to locate the correct Harvester pub.  The team news saw Ryan Hall start in place of the injured Thomas with Diouf still on the bench. A decent lunchtime crowd had filled Pride Park helped by over 3,500 travelling fans.  The freezing cold tempered some of the enthusiasm of the gathered fans as the game got under way.

Leeds started slowly as the eager home side pressed Leeds into mistakes.  The bald headed Connor Sammon was causing  Tate and Lees problems from the first minute with his robust, physical style and when Derby forced a corner after Kenny slammed a clearance against a Leeds defender things were not looking good for Leeds.  The game was very similar to the Huddersfield one in that the home side dominated the opening exchanges urged on by an expectant crowd.  Derby's precocious young talent in midfield, Will Hughes, began to catch the eye with a series of exquisite touches and telling passes.  He might look like an anaemic albino with his shock of bleached blonde hair and whiter than white skin but boy can he play football!  Not surprisingly it was his mazy run  that set up the opening goal.  Leeds defenders back pedalled as he ran at the heart of the Leeds defence before releasing the ball to Sammon inside the box.  Peltier failed to stop Sammon slithering past and his scuffed shot sent Kenny the wrong way.  1.0 Rams and the stadium erupted. Bollox.  Still this is how we started against Huddersfield so don't panic...........yet.

Derby were bossing the game though as Leeds struggled to shackle Hughes and Sammon.  30 minutes gone and Leeds had hardly troubled the home goal whilst at the other end Kenny was working overtime to keep the score at 1.0.  His brave save at the feet of Robinson earned him a smack in the chops but that's what he's there for.  Green was working hard against his old team but Byram's trademark runs down the wing had been severely curtailed by the compact Derby set up. Derby just seemed to be first to every loose ball in midfield and gobbled up every long ball into their defence with the impressive Keogh, one time target of Leeds, dominating Mr Becchio.  Things were not looking good but it was still only 1.0.

Then just as they did last week Leeds scored a goal out of the blue.  Peltier, who is not a left back, got forward and shovelled the ball to Ryan Hall wide left.  Hall jinked one way and then launched a dangerous ball to the back post where for once Becchio won the ball and guided a perfect header into the path of Paul Green to equalise.  Get innnnnnnnnnnnnnnnn! 1.1.  The half time whistle went and the teams somehow trooped off with the score all square.

Some of the pre match optimism had been restored by the goal but most fans were under no illusions at the size of the task in hand in the second 45 minutes.  It was Leeds who started the better though as they piled pressure onto the Derby goal in front of their baying fans.  Ross Mac tried a shot that Legzdins easily saved but then first Green and then Ross Mac got to the bye line and pulled teasing crosses into the danger area but  nobody got the vital touch.  The game opened up as Leeds pressed.  Derby broke quickly out of defence and started to look dangerous again as the half progressed.  Hughes danced his through the mesmerised Leeds defence and curled a lovely shot goalwards only for Kenny to palm it away.  Sammon continued to be given too much space for my liking as I urged Lees and Tate to get closer and return some of the physical roughing up, ie give him one, all to no avail though.  Well it worked in my day! At the other end Hall gave the Leeds hordes hope as he hit a terrific shot that was desperately cleared off the line by the Derby full back.

Derby's pressure finally told after the hour as a combination of the Derby centre backs, Keogh and Buxton, capitalised on a weak clearance from a corner to fire Derby back into the lead. 2.1. Difficult to see Leeds coming back from this?  Varney replaced Hall much to the disgust of the fan to my right.  "He's fucking rubbish" was his considered opinion of the ex Derby player clearly shared by a number of Leeds fans as they chanted "If Varney scores we're on the pitch"  The two solitary policemen behind the goal looked decidedly nervous.  They didn't need to be though.

Varney did actually spark a flurry of concern in the home defence as he won a couple of headers from the howitzers that were now raining down on the Rams defence.  This was not pretty but Derby were ruffled. Green had a shout for a penalty turned down as did Ross Mac as his shot was handled in the box.  Diouf replaced a quiet Ross Mac though and added a much needed touch of class.  He hit a stinging shot inches wide as Leeds threw caution to the wind in search of an equaliser.  This left the defence hopelessly exposed though and the peerless Hughes revelled in the extra space.

Leeds ambitious approach so nearly paid off as Tom Lees rose and headed onto the inside of the post for the ball to bobble agonisingly close the goal line and out. 4 minutes of added time give Leeds hope but most of the time was spent by Sammon shielding the ball in the corner.  Hughes departed to a well deserved ovation.  For a seventeen year old he is mightily impressive.  A future England star in the making?  Derby administered the killer blow in the final minute as Davies rammed home a curling shot into the Leeds net. 3.1 Derby.  A bit harsh on Leeds but the best team won.  Sammon and Hughes were the difference between the two sides although had Hall's shot sneaked in or Lees header gone in it would have been a different game.

As the fans streamed away the home fans gleefully discussed how much they love turning over dirty Leeds.  They are getting used to it now having won the last 8 games between the two old rivals.  As I pointed out to one particular annoying fan "it's just a pity you're shite away from home or you'd be top of the league"  He agreed and visibly sunk into a mini depression considering what I'd just said.  Mint.  You see even when you win football has a nasty habit of depressing you.

Overall I thought Leeds struggled to get any sort of momentum in this game.  Difficult to pick a MOM.  Green had a decent game but other than that not many Leeds players won their individual battles.  Ipswich up next at Elland Road.  At least they are near the bottom of the table...............hang on a minute they're now on a winning run.  This league is so tight which is why I love it.  So after being fleeced by the Rams can we harvest three points against the Tractor Boys?  I do hope so.

Posted by Andrew Butterwick at 19:47