Will the Rams be easy meat for resurgent Leeds?

In the last decade any fixture with the words "Derby County away" in the description has usually meant a disappointing trip back up the M1 for Leeds United.  Since a Lee Bowyer goal pinched all three points for Leeds in 2002 any point from a trip to Pride Park has been few and far between in fact the East Midlanders have won the last seven games in all competitions between the two old rivals. But records and jinxes are there to be broken so will the bracing wind of optimism that is currently blowing through Elland Road justify a forth win on the bounce for the mighty whites at Pride Park?

Leeds go into the clash with the higher confidence after three stunning victories on the bounce whilst Nigel Clough's team are consistently inconsistent.  Their form at home is rock solid but as soon as they travel away the Rams are decidedly travel sick leaking goals like a well worn sieve.  In  their last four trips away from Pride Park they have shipped 12 goals and lost every game whilst the same number of home games have yielded three wins and a draw and a miserly three goals.  So Pride Park appears to be a fortress that needs approaching with caution but the way the Rams defence crumbled in their last game against the same Leicester side that succumbed to Leeds in their previous game offers lots of hope for the mighty whites. 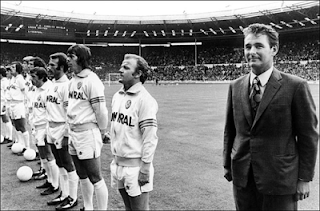 NW will have a relative abundance of riches to pick from for the lunchtime kick off.  Diouf and Pearce are likely to be warming the bench with Luke Varney returning from suspension to add to the competition for places.  Makes a change from a few short weeks ago when we were scratting around for players to fill the bench? I would be shocked if he started with anything other than the starting eleven at Huddersfield although Ryan Hall will be disappointed not to start after he made such an impressive impact at the Puppydogs.

So another mouth watering away day is in prospect for over 3,000 Leeds fans as they head down Brian Clough Way to Pride Park.  It's 15 years this week since the great Billy Bremner passed away so it seems somewhat appropriate that we are playing one of the teams that Billy loved to go to war with in his pomp on the anniversary of his death. For fans of certain age the titanic battles with Cloughie's Derby still bring a tear to the eye.  Memories of murky games on a muddy Baseball Ground come flooding back.....Norman and Franny fighting like two kids in the playground......Clough and Revie going toe to toe on Calendar the day after Clough's ridiculous appointment as Leeds Manager.  Yes Leeds and Derby have a history that stokes the atmosphere at games even today although the eye of that particular football storm was over 38 years ago.  It's these sorts of football rivalries that non football people struggle to understand but I love them.

Can the Arab Spring inspired Leeds of today end a recent woeful record against Derby? I think they can and I think Leeds will test the miserly home defence.  The old crystal ball can see Ross Mac back in the goals this week.  Dare we hope for a 3.1 win? Why not.  If they do I suspect a little red haired dynamo in the great football ground in the sky will be dancing with delight in front of an old alcoholic dressed in a green track suit top?
Let's do this one for Billy. Side before self.

MOT
Posted by Andrew Butterwick at 22:12