Matchday dawns bright and chilly in Selby.  The Happy Chocker, Quiet One and yours truly are heading to the station for the short away trip to Puppytown but there's something different about the mood today?  The rabid pessimism of recent weeks has disappeared into a cloud of cautious optimism after just two games of the takeover inspired "new" Leeds United.  Just three weeks ago the prospect of playing the then high flying West Yorkshire neighbours in a local derby was about as appealing as tucking into a meal of Kangeroo's bollox on "I'm a Celebrity".  Now I can't wait! 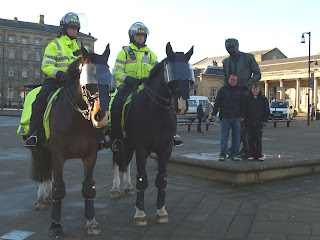 As we debated the likely team selection and the possible impact of Mr Beckford would have on the game the train filled up at Leeds station. Jason Pearce was available after his suspension but was unlikely to force his way back into the team after recent sterling performances from Lees and Tate.  Fueled by a couple of cans of Stella Artois both HC and I were now very confident as we left Huddersfield station behind and headed for the stadium.  There were lots of friendly policeman on the route who all seemed to be Leeds fans.  The team news when it came contained two shocks.  Jermaine Beckford wasn't on the Huddersfield team sheet presumably because he had his "Leeds" injury and on the Leeds side Ross Mac was starting in place of Diouf who had picked up a knock in midweek. 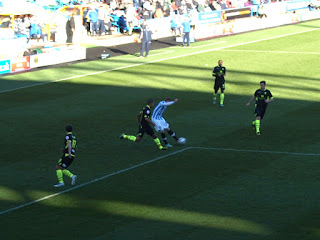 The atmosphere was electric as the game kicked off with 4,000 away fans in good voice.  Surprisingly for the "Family club of the year" the first song we heard from the home fans was "We all hate Leeds scum".....class!  The opening exchanges were frantic but it was the team playing in Tesco bag shirts who settled the better and put Leeds under early pressure.  Leeds looked uneasy with the high tempo that Town were playing and were opened up on ten minutes with a simple one two that saw Atkinson free in the box and he finished coolly to give Town a one nil lead.  The 3/4s of the ground erupted as the Leeds fans stood in stunned silence.  Mmmm maybe the two wins earlier in the week were a flash in the pan?

Town enjoyed a purple patch as they pulled the Leeds midfield about and stretched the resolute defence.  Lee was causing problems for Tate and Lees and as the game approached thirty minutes Leeds looked anything but comfortable.  Green was working well in midfield with Byram making some decent runs down the flank and Ross Mac looked dangerous up front.  Thomas was struggling on the wing against the impressive Jack Hunt though.  Then out of the blue Leeds equalised. Green surged forward down the right and launched a high ball to the back post where Becchio cushioned a header down for Thomas to lay off for Tonge who hit his shot straight at Smithies in the Town goal.................Smithies, presumably under instruction from Agent Grayson, allowed the ball to squirm under his body and into the net. 1.1. and is was the turn of the other three sides of the ground to sit there in disbelief whilst the away hordes danced with delight. Mint! 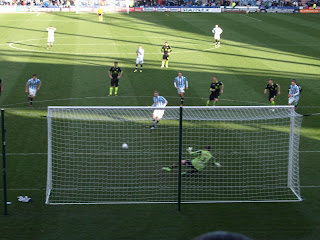 If that wasn't enough a minute later Becchio smashed an unstoppable shot past the poor Smithies after good work by Ross Mac.  2.1 Leeds and bodies were flying to the left and right of me in celebration of the most unlikeliest of leads for the mighty whites.  MOT blasted into the Kirklees mid day air and all was well with the world. The West Yorkshire derby was now well and truly alight.  Within 5 minutes ex Leeds midfielder Clayton had pulled Town level though.  Becchio was adjudged to have pulled Gerrard down as he went for a ball in the box.  Leeds players protested furiously but Mike Dean pointed to the spot.  Pelts and Ross Mac both gave Clayton the benefit of their thoughts as he prepared to take the kick but to no avail as he sent Kenny the wrong way before sprinting to celebrate in front of Neil Warnock.  A bit dramatic for tucking away a penalty but hey ho.

A breathless half finished 2.2.  Leeds hadn't started well but had managed to pull themselves up by their boot laces and get back into the match.  Warnock's decision to play Ross Mac was paying off as he had been a constant thorn in Town's side for the first 45 minutes.  Smithies' howler earned him a generous round of ironic applause as he took his place for the 2nd half in front of the Leeds fans. 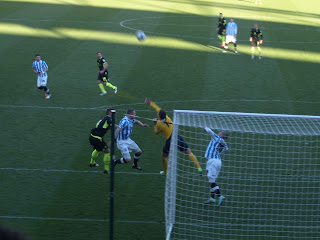 Leeds took the game by the scruff of the neck in the 2nd half as they started to dominate their crumbling neighbours.  Green was everywhere along with Norris who were now winning their midfield duel with Clayton and his chums handsomely.  Becchio was grafting away in tandem with the impressive Ross Mac up top.  Down the flanks Byram was having another classy game.  He is such a talent for such a young age.  On the other flank Thomas was struggling to get the better of Hunt and shortly after he had fizzed a shot over the bar on the hour he was subbed for Ryan Hall.  At the same time agent Grayson replaced Town's best player, Lee, with Vaughan.  Nice one Simon but don't make it too obvious though.  Of the two subs Vaughan clearly has the better pedigree coming to Town on loan from Norwich with Premier League experience whilst Hall was picked up from Southend on loan but it was Hall who was to make the more telling impact on the game.

Hall immediately gave Hunt problems as he strove to prove he is worth a starting spot on the flank for Leeds.  Within ten minutes of him coming on he had created a superb chance for Norris who stroked the ball home from 12 yards out after Hall had selfishly pulled the ball back to him.  3.2 Leeds and the 4,000 away fans exploded with joy.  With twenty minutes left could Leeds close out the game?  After all they hadn't won a game by more than two goals this season.  Buttocks were duly clenched in preparation.  I needn't have worried though.  This was the new Leeds, the new Arab Spring inspired Leeds and they tore into Town like a pack of rabid dogs ravaging their prey.  Flowing football oozed from Warnock's men as Agent Grayson's troops meekly surrendered.  Smithies was under intense fire.  Hall shot fiercely only to see his effort go inches wide.  The super human Green ran across his man in the box and glanced a header goalwards that Smithies tipped over the bar.  By now Ross Mac was running riot pulling the labouring home defence all over the shop as Leeds swarmed all over the disjointed home team.  The forth goal was inevitable and it came with five minutes to go.  Hall was again the provider as he teased the Town back line before picking out Becchio for his 2nd goal of the game as he planted a superb header in off the bar.  Oh joy of joy. 4.2 Leeds and the three sides of the ground containing the Town fans were emptying faster than they could say "We're Yorkshire's No 1"

Leeds fans belted out "You should have gone Xmas shopping" followed by a chorus of "Marching on Together" that must have been heard all the way back at Elland Road.  Leeds had put their yapping neighbours to the sword in the 2nd half to prove they are top dogs in West Yorkshire.  Mike Dean blew the whistle to put the Puppydogs out of their misery and the 4,000 travelling support celebrated a third victory in a week.  Fantastic!

This was a stunning performance from Leeds all the more remarkable as they had been decidedly second best for the first twenty minutes but Warnock has now got his team finely tuned with just two new loan signings.  Wonder what he will do when he has some cash to splash in January?  The journey home was a good one accompanied by a mile wide grin all the way back to Selby.  I do like a good away day especially when we play like this.  Can we keep this up?  Derby away next then Ipswich at home followed by the little matter of Chelski in the cup.  We couldn't get three more wins on the bounce could we?

Posted by Andrew Butterwick at 18:21