The bright sunshine that dazzled my eyes belied the bitter cold as I gunned the car southwards towards East Anglia for the clash with Mick McCarthy's Tractor Boys. The Happy Chocker, Quiet One were joined by the Wakey Warriors for the latest Leeds United awayday. The mood was remarkably positive in the car considering we had only sampled the sweet taste of success three times away from Elland Road this term.  Could Ipswich be the fourth? Well judging by the atmosphere inside the Station Hotel Ipswich there was nothing that could stop the mighty whites from taking three points back up north as the full back catalogue of the Leeds United songbook was given a healthy airing by the hardy Leeds fans packed into the Suffolk hostelry. Once again that wonderful pre match anticipation drug was working it's magic on the gathered LUFC family and like a boxer who keeps coming back for more we were all drinking it in with naive abandon.

Warnock had made three changes from the last game against Huddersfield with Austin, Habibou and Diouf making way for Norris, Morison and Michael Brown. Ross Mac was left on the bench with Varney partnering Morison up front.  Not for the first time this season there were some puzzled faces amongst the away fans as they tried to understand our leader's selection logic? Still Ipswich were teetering on the relegation precipice so they should be there for the taking shouldn't they?

The match kicked of with a Siberian wind whipping through the Cobbold stand and flurries of snow blowing  across the pitch.  All this on a day when the clocks are adjusted to British Summer Time! The opening exchanges were lively to say the least as both sides came out fighting. Cresswell swung two early crosses into the Leeds box that had Lees and Peltier scrambling to get the ball away whilst at the other end the Ipswich defence were at sixes and sevens as a Warnock corner clattered a post and Green's follow up was gratefully cleared by Stearman. Leeds fed on their early superiority and soon Loach in the Blues goal was called upon to keep out shots from Norris, Green and Varney before punching a Morison header to safety.  This was good early pressure from Leeds........................all we needed was somebody to finish one of the chances. Even Michael Brown ghosted onto a cross and fizzed the ball inches over the bar.  For once we were creating good chances up front whilst at the back Tom Lees was winning everything in the air despite taking a nasty knock to the face in the opening 5 minutes.  This was good and if I'm honest a little too good.  there had to be a twist...........this was Leeds playing away.  The twist came on 31 minutes.

Tom Lees mistimed attempt to stub a Tabb attack out resulted in a straight red card for the Leeds youngster much to the rankle of the massed Leeds hordes.  It was a harsh decision but not surprising.  Lees caught the Ipswich player in the chest with his knee although Tabb is only 4ft 2" high it was still a reckless challenge.  So for the third game running a Leeds player had taken an early bath on a visit to Portman Road with Lees following in the footsteps of White and Bruce in the last two years. Mmmm 60 minutes to go with only ten men.  Not good.

Byram went to centre half and Green dropped to full back as Leeds reshuffled.  Green so nearly compounded a bad situation as he appeared to bring Tabb down from behind in the penalty area just minutes later.  The ref waved play on.  It's safe to say that Mr Tabb was not the most popular player with the away fans at this time. Leeds recovered their composure and even opened Ipswich up with a lovely move that Morison wastefully fired high and wide under no pressure from 12 yards. Bollox. Then just when it seemed Leeds would get into half time level they conceded a desperately disappointing goal right on the stroke of half time. Edwards found space on the right and floated a teasing cross into the box where Hyam headed against the bar and McGoldrick snaffled up the rebound to put Ipswich 1.0 up. Half Time. 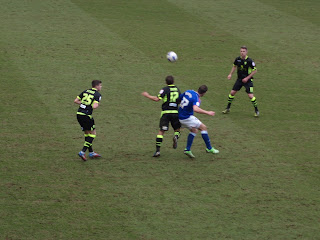 Warnock changed the team at half time bringing Pearce on for Green. The next goal was now crucial.  If Ipswich got it then I feared for Leeds and my fears were well founded as they opened up the Leeds back line with almost their first attack of the half giving McGoldrick the simplest of chances that he accepted with ease. Ipswich 2.0 and game over against the ten men of Leeds. Morison had a chance to pull one back for Leeds but his wayward shot struck Varney instead of the back of the net.  Sort of summed Leeds up. The away fans were now resigned to yet another fruitless away trip and gallows humour became the order of the day.  Songs advising Mr Warnock to take a trip to Cornwall and ironic cheers when we had a shot or strung more than three passes together spilled down from the frustration of the Cobbold Stand.  On the pitch Paddy Kenny was now working overtime to give the scoreline some respectability. Byram had a terrific shot blocked on the line but Ipswich added an inevitable third on 70 minutes as the game drifted away from Leeds accompanied by defiant chants of "We're shite but we still Love Leeds" and "you're not so special we lose every week" from the remaining Leeds fans.  With the exception of Byram, Kenny and Warnock there were too many players in Leeds shirts just not showing the passion required when you go down to ten men. The game finished 3.0 but I was already back in the car. Ipswich is a fucking long way to come to watch your team give in without putting up much of a fight. 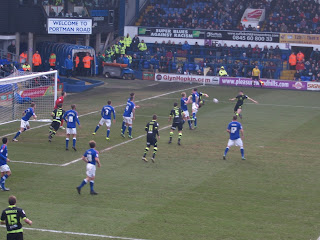 This was the 5th game without a win for Leeds a statistic that had us nervously scanning the league table as we headed back north. After the bright opening the capitulation after Lees' red card was so annoyingly frustrating and so similar to last year's trip to Portman Road when we failed spectacularly in the 2nd period. If anyone had any doubt that we are nowhere near good enough to get out of this league then this game must have eliminated any last spark of forlorn hope.  It's time the players shouldered the blame aswell as the Manager. This season can't end quick enough for me but with uncertainty over who will own and manage the club next season I can't see the summer being anything other than drenched in rumours, speculation and too little action on Planet Leeds.

Derby up next on Easter Monday.  Can Leeds resurrect some semblance of form and beat the East Midlanders..................something we've failed to do in the last 87 games against the Rams? I'm not overly optimistic on this one. Life on Planet Leeds gets more difficult as each week goes by.

Difficult to take much more.

Posted by Andrew Butterwick at 22:48