A bright frosty morning greeted the Happy Chocker, Quiet One and yours truly as we assembled at Selby station for the trip to the Theatre of Frustration for the early kick off against Millwall.  Somehow sunshine seems to give you more optimism despite Leeds facing a monumental week ahead where the last flicker of hope for the play offs will either be re-ignited or rudely extinguished with games against Wall, Leicester and Palace. Warnock had beaten the Leeds drum loud and proud all week ranting on about how he had finally discovered a settled team and we were going for a last glorious charge at the Play off citadel. Whilst I was still trying to square our leader's assessment of the current situation with recent performances I had witnessed the hardy fans from Selby boarded the train.

The midday kick off, high ticket prices and a lack of any away supporters made for a subdued atmosphere amongst the 19,002 hardy fans. Optimism rose as kick off approached with most fans expecting a win against our London rivals.  I was still a tad apprehensive but it didn't stop me having a side bet on a 1.0 Leeds win.  Warnock stuck with the same team from last week's frustrating draw at Blackburn.  Millwall had ex Leeds players Lowry and Keogh in their squad whilst Leeds had ex Lion, Morison, starting for them. Bright Spring sunshine beamed down on LS11 as the game got under way.

Millwall roared from the first minute as they swarmed all over a hesitant home side. Woolford fired in an early shot before James Henry rattled a post with a firm shot all before 15 minutes had passed.  This wasn't looking that promising and the possibility of a victory to start a crucial week for the club looked a million miles away.  Leeds did wake from their slumbers though and a Varney header whizzed into the kop before the busy Tonge rasped a shot into the same area. The quality of the football on both sides was decidedly average as neither team seemed able to put more than two or three passes together before hoofing the ball into the heavens. Leeds build up play started to improve though and when Byram jinked into the box on 28 minutes Lowry mistimed his tackle and the young full back lay prostrate on the canvas. PENALTY! Ross Mac stepped up to take the kick but the ref wasn't happy with the ball on the spot and made him re-spot it. Could he banish the memories of his recent misses to history by converting from 12 yards............No.  Forde dived to his left and tipped the ball onto the post and away to safety.  A collective sigh of resignation drifted around the half empty stadium.Minutes later the Scot had an ideal opportunity to redeem himself as he benefited from a superb move down the left flank but fluffed his chance from 10 yards out with the goal gaping in front of him.  Once again he tried to pull the ball onto his favoured right foot instead of hitting it with his left. "Just put your fucking boot through it" one coach advised from the Capt's Lounge.

The game had opened up and Marquis had a chance for the visitors but Kenny was equal to it.  It was Leeds who held the slight upper hand though and so nearly pinched the lead when a Ross Mac cross floated past Forde and hit the post before rolling innocently wide.  This wasn't edge of the seat stuff but it was lively mainly due to the numerous times each team gave the ball away to each other.  The comparison with a hot potato was very apt.  Millwall finished the half with chances for Lowry and Woolford both of which were spurned.  Half Time 0.0. Morison had had a quiet game against his ex colleagues whilst Warnock was adding numbers to his ever growing fan club with another impressive display. Ross Mac was playing well until he gets sight of goal and then he resembles a quivering jelly being carried by an alcoholic with the shakes. 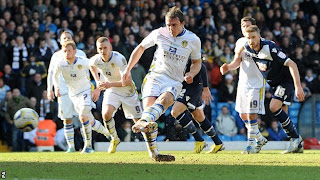 The urinal philosophers were in an unforgiving mood. "that was shite" one punter announced, presumably referring to the game. "Ross Mac's useless" another frustrated fan announced to nobody in particular and another thought  "none of that lot could pass water never mind to another white shirt" Yes the mood was not all that positive at half time even though it was still 0.0!

The 2nd half followed a similar pattern to the first with the ball pinging about the pitch like a demented pin ball in a machine on permanent tilt. As the clock ticked towards the hour mark first Green and then Tonge hit promising shots goalwards as both teams strived for that all important first goal. "I can't see this finishing goalless" HC suggested. Leeds were now enjoying their best bit of a scrappy match without bringing out any sort of decent save from Forde in the Millwall goal. Then with just over twenty minutes left Leeds were awarded a 2nd penalty after Ross Mac was bundled over.  No complaints from the Millwall team but who was going to take the kick? Would Ross Mac's fragile confidence hold out? Neil Warnock didn't think so as he scrambled El Hadji Diouf to get on the pitch to take the crucial penalty. Stephen Warnock settled everybody's nerves though as he stepped up and slotted the ball home.  Bizarrely with a worse penalty than the one Ross Mac had saved! 1.0 Leeds and the faint whiff of 3 points wafted in Leeds' direction.

Millwall pushed on for an equaliser straight away winning three or four corners on the bounce to test the nerves of the home fans. With each corner the kop screamed for the ref to re-spot the ball in the triangle which each time he trotted across to check. Somehow the redoubtable Lees and Pelts kept the weak Millwall attack at bay.  Varney then wasted a chance to kill the game as Forde denied him on a one on one. Both teams had a man stretchered off after tackles from Warnock. Varney was the recipient of one of the tackles that will leave him doubtful for Tuesday's clash with Leicester.  After copious amounts of added time Leeds finally emerged victorious against a plucky Millwall side. 1.0 Leeds.

As fans tumbled out of the stadium and into the bright sunshine comments such as "3 points is 3 points" were common together with "another clean sheet".  Not many were eulogising about the quality of the football though?  But as everybody was saying three points at this stage of the season is all that matters.  Warnock was my man of the match.  Lees and Pelts again did well at the back whilst Morison has still to convince the vast majority of Leeds fans that he is a quality player.  Worryingly Ross Mac's finishing is now worse than a blind plasterer as his confidence in front of goal plummets. Varney is slowly turning from a Marmite player into a fans favourite on the back of his willing work ethic and ability in the air.  If he can just sort his finishing out he'd be a good asset.  Today was a strange game I thought.  Not one to get the adrenaline surging through your veins although there were plenty of chances at both ends of the pitch. Still three clean sheets on the bounce is encouraging.  Now if we could just make it five by the time we return from Selhurst Park on Saturday night then Neil Warnock might just be right about our play off chances.  It's a tough ask though.

Leicester up next on Tuesday night. Having tamed the Lions can we follow that up by snaring a Fox?