The first glimpses of spring were evident as the Happy Chocker, Brother Chris, Quiet One and yours truly boarded the train at Selby station. That rare feeling of optimism was permutating the pre match discussions as we eagerly reviewed the weeks changes at the Theatre of Hope. Brian McDermott had finally signed a 3 year contract to try and guide Leeds up the football pyramid. His first task was to drag Warnock's collection of players away from the relegation dog fight. A win against Dave Jones' Wednesday was vital if Leeds fans were going to have a stressless finish to the season. Anything else would leave non existent fingernails amongst the hardy mighty whites fans. The Masterchef Gregg Wallace lookalike Leeds manager had an intriguing selection dilemma for his first game. Who would play at centre half with Lees suspended and Peltier injured? Austin was rumoured to be in line for a start at the back but the ex Reading man surprised a few by putting Stephen Warnock alongside Pearce at the heart of the Leeds defence with Adam Drury returning at left back. Managing a football club doesn't get any tougher than that! The midfield looked a bit unbalanced as Varney and Norris were deployed wide with Green and Austin in the midfield. Ross Mac and Morison started up front.

A disappointing crowd of 23,000 had assembled for this vital Yorkshire derby as the game got under way in faltering sunshine. The aficionados of Leeds football scrutinised the opening exchanges for evidence of a change of tack from Warnock's less than pleasing Hoofball style. The green shoots of change were soon evident. Kenny actually rolled the ball out to the full backs and Austin had clearly been instructed to pick up the ball from the back. Encouraging but there were some very nervy Leeds defenders with this alien tactic not least Jason Pearce. Brian Mac had taken full control of the team. Yes Redders was still in the dug out but it was the suited and booted Brian Mac who was stalking the technical area directing operations on the pitch and making copious notes in his little black book.

Morison had the first real chance but mis kicked from 6 yards. Mmmmmm new manager but still the same quality of players on the pitch. Wednesday looked lively on the break and the new look Leeds back four didn't look that solid with Warnock having to make a couple of timely interventions to deny the Owls. Leeds were struggling to settle into their new style of play with Austin promoted to some sort of playmaker from the back. Whilst he was keen to receive the ball his distribution was less than impressive. After another wayward pass Brain Mac scribbled furiously into his notebook. Leeds were playing the ball on the floor but not opening up a distinctly average Owls side.

On the half hour Wednesday sent their 3,000 fans into delirium as Johnson beat the hesitant Kenny and Warnock to an innocuous through ball and looped the ball into the net. His goal celebration at the corner of the kop was ill advised at best. In reality he demonstrated crass, selfish judgement in taunting the home fans. The reaction to his antics didn't deflect from the fact that both Kenny and Warnock made a complete hash of what should have been a simple clearance. Leeds 0.1 Wednesday.

The goal took some of the wind out of Leeds sails but they did manage to pressure the Owls with a Ross Mac free kick and then Pearce somehow missed a header from 7 yards whilst at the other end Kenny had to be at his best to keep the Owls at bay as they pushed for a second goal. Half Time Leeds 0.1 Owls.

The urinal philosophers were not too disheartened but reflected more on the lack of inspiration from Morison and Austin rather than some of the isolated bright sparks of the first 45 minutes. "Austin can't pass fucking water" one vile animal commented. " Morison makes a donkey look quick" another quipped. Our new manager had a difficult first half time team talk. His tactics certainly looked better but some players were struggling with the concept of keeping the ball on the grass. Norris looked lost on the wing and Pearce looked as nervous as a child bride in his role of distributing from the back.

During Warnock's reign his use of substitutes and tactical changes were heavily criticised for the lack of creativity. Brian Mac went boldly where Colin feared to go as he gave Norris the hook at half time and sent on Diouf to freshen up the Leeds wide play. His shock move had an immediate effect as Leeds new width paid dividends as Diouf glided through the midfield and set up Morison clear on goal but his laboured control and finish was easily saved by Kirkland. Leeds smelt blood and soon Ross Mac forced a superb save from Kirkland before both Varney and Green tried to force the ball home. The Leeds crowd were fired up and MOT belted out from the KOP with as much passion as I've heard all season. 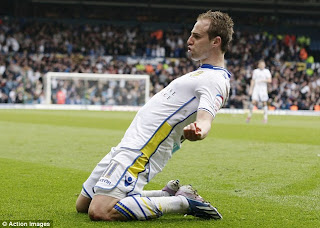 White came on for Morison on the hour as Brian Mac added pace to the right flank and moved Varney to centre forward. Numerous home fans had to seek clarification on the rules. Were you allowed to bring on subs before the 91st minute I heard one confused fan ask. With Diouf dancing on one wing and White flying on the other Leeds looked more balanced as the new passing style started to gel. 63 minutes had gone when the wonderfully industrious Ross Mac found space on the right flank and swung a delightful cross into the box............Varney's pace gave him space to head firmly against the bar..........the ball crashed down. Was it in? Yes it was as the ref blew for the goal and headed back to the centre circle. Get innnnnnnnnnn! Leeds 1.1 Owls.

Elland Road was only half full but it was now bouncing as Leeds tore into their South Yorkshire rivals with some style. Ross Mac was on fire and his mazy run into the box provided another telling cross for Varney who once again flicked his header goalwards. This time there was no doubt as the ball nestled in the top corner. 2.1 Leeds and the old stadium erupted. Two goals for Varney had changed this game within ten minutes of him taking up the strikers role. Wednesday were now there for the taking.

The novelty of leading going into the last ten minutes seemed to make Leeds nervous as Wednesday looked to grab an equaliser. Steve Howard somehow found space and smacked a shot against the post while Lita should have absolutely buried a golden chance with only two minutes to go.........but he didn't as his tame shot rolled a yard wide with only Kenny to beat.

Added time provided a nervous finale for Leeds but they survived for a much needed victory. Full time Leeds Utd 2.1 Sheff Wed. Brian Mac came onto the field and shook all his players hands something Colin never did. The kop stayed behind to pay tribute to the team and the new manager. Smiles were back on the fan's faces for the first time in a long while. Even in the queue for the shuttle bus there was laughter, smiling and joking............unheard of!

The second half performance was rich in promise from Leeds. Diouf made a significant difference as did Varney's move to centre forward. Ross Mac was illusive and with Byram and even White causing havoc out wide Leeds looked a different side to the laboured directionless eleven we have witnessed in recent weeks. Same players different manager. I wonder if they were concentrating more on passing the ball and playing to a plan rather than "giving their all" for the manager?

The three points steer Leeds well away from the relegation scrap and if they follow up with a win against Burnley on Tuesday then Brian Mac can start looking towards building a team ready for a promotion push next year. His tactical nous and calm confidence has already impressed the demanding Leeds fans. Could we be on the verge of something good at long last at Leeds? I do hope so.


Posted by Andrew Butterwick at 18:09