As with all midweek games it required a mad dash from work to ensure we didn't miss the next instalment of Leeds United's 2013/14 campaign. The late afternoon stress wasn't necessary though as the Happy Chocker, Brother Chris and the Quiet One all arrived in good time for a pre match drink at the Park Inn which is a short skip and a jump from the stadium. Brian McD had indicated he would be making 5 changes with Wootton making his debut. Would it be Lees or Pearce who steps down though? Who else would get a run? We tried to 2nd guess our leader's thoughts as the hotel filled with football fans.

Nearly 4,000 fans had made the short trip to Doncaster for this Capital One Cup 2nd round game and they were in good voice as the game kicked off. Mowatt, Poleon, Smith and Drury joined Wootton as changes from Saturday's starting eleven with Hall, Brown, Hunt, Diouf, Murphy, White and Ashdown on the bench. Lees made way for Wootton. Warnock, Norris and Varney didn't travel.

Donny started the better with our old adversary Richie Wellens pulling the home side's strings from midfield. Once again Leeds seemed slow to start and could have been one down in the first ten minutes but for some wayward finishing and a superb goal line clearance from debutant Wootton.  Were Leeds sticking to their usual game plan this season, let them score first and then knock two goals in? Leeds did gradually get a foothold in the game as young Mowatt drew purrs of delight from the travelling hordes as he stroked the ball about with ease. Clearly he has a lot of talent something that Brian McD has clearly recognised by drafting him into the first team set up. I wonder if Mr Warnock would have done the same? I think we all know the answer to that!

Leeds patient approach play started to pay dividends as chances were crafted through intelligent play rather than brawn. Mowatt broke and released Ross Mac who hit a screamer over the bar. Peltier and Tonge combined well down the right but Smith could only direct a soft header into Turnbull's arms in the home goal before Ross Mac missed a golden opportunity to break the deadlock when he blazed over from 15 yards. Chances continued to flow though and Ross Mac's next chance saw his shot fizz past the post. Mowatt added a touch on naive class to the Leeds midfield as he and Drury stuck up an instant understanding on the left flank. At the other end Kenny had to be alert to keep out a couple of half chances but in front of him Pearce and Wootton were getting to grips with the threat from Robinson and Brown. As befitting of a Yorkshire derby there were some meaty challenges dished out from both sides. Pearce picked up a yellow for a crunching tackle where he seemed to take the ball while Wellens seemed to have licence to hold players off with his elbow. Both sides were playing open football and surely it was only a matter of time before the deadlock would be broken. Smith was battling well with the giant Jones in the home defence whilst Poleon was testing one time Leeds target, Wabara, with his pacey runs. 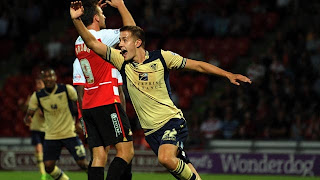 Just as half time approached the Leeds pressure paid off.  Once again Drury and Mowatt linked well down the flank before the young debutant swung in a vicious cross deep to the Donny back post.....Smith rose magnificently to head back into the box where Wootton sent the travelling fans into raptures by scoring on his debut. 1.0 Leeds. No more than they deserved. Confidence was now oozing from every Leeds move and right through the team. Poleon once again left Wabara for dead but couldn't finish. HT 1.0 Leeds and 4,000 very happy Leeds fans applauded their team off. On the evidence of the first 45 minutes we were well on the way to stretching our unbeaten start to the season to 6 games.  As the Happy Chocker commented "you wouldn't have thought that after the Walsall pre season friendly"

Leeds continued to turn the screw in the 2nd half with Ross Mac, Austin, Mowatt, Smith and Poleon to the fore whilst the back four looked rock solid. Ross Mac had a chance to kill the tie as Mowatt released him but Turnbull got down well to his goalbound shot. Leeds were well on top and both Poleon and then Smith spurned chances to take the tie away from the South Yorkshiremen. On the hour ex Leeds man Billy Paynter came off the bench for Doncaster. "He's nailed on to score" I commented.  That despite the fact that when he wore a Leeds shirt I thought the exact opposite.  So as if to prove the taunting Leeds fans wrong he did just that with only his third touch. A cross from the left fizzed into the box and Billy was on it like a flash and thumped a header past the motionless Kenny.  Unbelievable. It must have been the Leeds shirt that stopped him scoring for us! 1.1. Buoyed by the goal and the home fans noise Donny then had a purple patch as they went for the win.  Leeds started to rock as substitute Duffy found space in the middle of the park.

The stadium was now rocking as the game swung from end to end. Smith brought a spectacular save from Turnbull with a swivelling volley from inside the box as Leeds recovered from the equaliser. On 74 minutes the tiring Mowatt was replaced by Murphy  and received a thunderous ovation from the appreciative travelling fans. What a debut for the lad! Murphy made an immediate impact as he added fresh legs and a touch of composure to the Leeds midfield. On 77 minutes he picked up a nothing ball in the centre of the park and spread it wide to Peltier who advanced towards the box using Ross Mac as a foil before swinging a sweet cross into the Rovers box where Smith rose above the crowd and smashed a header past Turnbull. Get innnnnnnnnnnnnnnn! 2.1 Leeds and the Leeds fans were delirious. Leeds now went for the kill as Donny pushed for an equaliser as they calmly moved the ball around the pitch looking for a chink in the home defence. Poleon ran at Wabara for the umpteenth time teasing him into dragging him down inside the box......PENALTY. Ross Mac stepped up and despatched the ball past the giant Turnbull. 3.1 and game over. "That's how you win 3.1" the Leeds fans taunted Doncaster after their abandoned match on Saturday.

Leeds played out the remaining time with a swagger. The referee blew for time and signalled Leeds passage into the third round. 6 games undefeated and some real good football to boot. Not sure we're allowed this luxury supporting Leeds are we? Lots of smiling faces from the Leeds fans as we streamed away from the ground.  How good did that feel? Brian McD will have a selection headache for the QPR game after this performance.  Wootton had an excellent debut whilst Mowatt was a revelation in midfield. Up front Smith and Poleon were a constant threat whilst Drury didn't put a foot wrong at left back. Ross Mac just gets better with each game. Man of the match? For me a toss up between Mowatt and Smith.

Suddenly there is a real buzz about the club. It's early days but the green shoots of recovery are starting to blossom under Brian McD's leadership.  QPR up next with 'Arry and his expensive team of contenders. If we are still unbeaten by 3pm Saturday the 7 nation army beat of "Ohhh Brian McDermott" will be on everybody's lips as Leeds march on. Delicious!

My first time on this site. A great write up and a super win for the Mighty Whites of Leeds.

Wit my fellow Leeds fan daughter and travelling companion now living and working in London, although she managed to get to the Brighton game I did not. Living in Devon I really look forward to, and appreciate, your entertaining match reports.

Thanks for the comments guys. MOT