We were up bright and early for the long trek to deepest Suffolk for our clash with Mick McCarthy's Tractor Boys. As ever the Happy Chocker and the Quiet One were on board as we gunned the car south down the M18 against a backdrop of depressing slate grey skies. Portman Road is hardly the happiest of hunting grounds for the mighty whites as I pointed out to HC "The last time we won here Ipswich were known as "The Shire Horse Boys" add that to the fact that it's compulsory to get a player sent off at Bobby Robson's spiritual home and the prospects of three points did seem a bit remote. We did have new boy Scott Wootton in the squad though and we were still unbeaten so all was not lost I suggested.

Once the car was safely deposited in the station car park we joined the heaving throng of Leeds fans in the Riverside Bar. The pre match atmosphere inside the welcoming hostelry was cranked up with the help of the pub sound system playing MOT and other Leeds songs to accompany the Yorkshire songsters. The optimism inside the pub was hardly supported by our awful record at Portman Road but since when has logic ever featured in the heady mix of pre match debate and predictions? 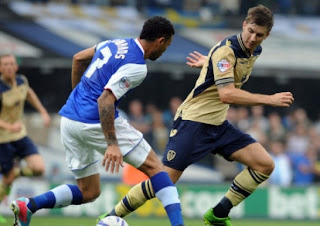 Brian McD brought Hunt back into the starting eleven in place of Poleon a slightly puzzling call in my book. Other than that it was the same team that started against Wednesday with new signing Wootton having to make do with a spot on the bench. The large away support lifted the decibel levels as the game got under way on a pristine playing surface. The wet weather  made for a slick surface as the Tractor Boys grabbed the early initiative with both hands and put Leeds to the sword in the opening quarter. Ipswich, utilising acres of space down their left flank, tore into a hesitant Leeds side like a boxer trying to finish a fight in the first round. Jay Tabb, who's 3rd rib caught Lees' boot last year, thought he'd opened the scoring after just 7 minutes when he tapped in from a yard after Kenny had turned a Cresswell shot into the path of McGoldrick but the linesman's flag saved Leeds from what seemed like a good goal. Cresswell was crucifying the Leeds flank with intelligent attacking play exposing Peltier time and again and we hadn't even played 10 minutes. The inevitable goal came on 11 minutes though as the unmarked McGoldrick picked up a flick on 30 yards out before clinically striking the ball unchallenged past Kenny in the Leeds goal. 1.0 Ipswich. Tom Lees held his head in his hands. He knew he should have done better in preventing the Ipswich striker from getting his shot away. 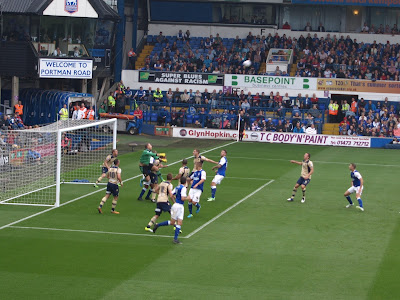 The goal just inspired the home team and Leeds were in danger of losing the game in the first 30 minutes as Mick McCarthy's high pressing game unsettled the men in Gold. Lees made amends for his slip by heading the ball over from deep inside his own 6 yard box with Ipswich players waiting to pounce and then the impressive Cresswell beat Kenny from 25 yards with a sublime curling shot that thumped against the bar. "We could be 3 down already" I mused. This had a distinct taste of deja vu at a ground where we hadn't sampled victory for 12 years. Things were not looking good.  The midfield looked at sixes and sevens and Ipswich's high defensive line frequently caught Varney the wrong side of the linesman's flag.

What we needed was a slice of good old fashioned luck and on 22 minutes that's exactly what we got. Ross Mac latched onto a loose ball on the edge of the box and smashed it goalwards. The ball bounced off a defender straight into the path of Mr Varney he sent a searing left foot shot past Loach in the home goal. 1.1 and the noise cranked up another level from the travelling support. Leeds were now back in the game with a bang and settled into a more confident mode of football.  Ipswich were still a significant threat though as Kenny's goal survived first an over ambitious header back from an under pressure Pearce and then a succession of corners as the Blues sort to reinstate the lead. At the other end Austin split the home defence only to be let down by his final touch whilst moments later Ross Mac found space but over hit a teasing cross into the Ipswich box. Premier League ref, Mike Dean, brought an entertaining half to an end with the scores level at 1.1.

Brian McD needed the break to reorganise the shape of the mighty whites.  Too many times in the first half Cresswell exposed our right flank defences as neither Green or Austin seemed to be clear who was supposed to be providing cover on the right hand side. The half time entertainment saw the Leeds fan win the inflatable ball race so at least we had finally won something at Portman Road. I wasn't that confident we could push on and rather glumly predicted we need another two goals to win this. Nobody disagreed. 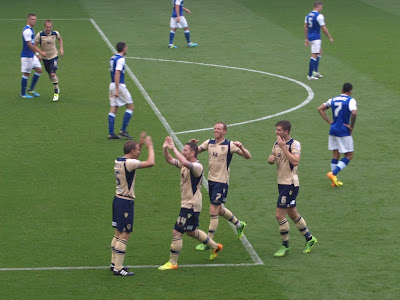 My slight touch of pessimism was brought to book with just two minutes of the 2nd half gone as a neat move down the Leeds right saw Varney pick out  Ross Mac who nipped inside and unleashed a decent shot that took a slight deflection which was enough to bamboozle Loach and Leeds were 2.1 up. Get innnnnnnnnnnnnnnn. Was the subdued celebration for Ross Mac because of the deflection or had he other things on his mind? The celebrations in the stand were far from subdued though as the away fans delighted in taking the lead. And we still had 11 men on the pitch. Unbelievable Jeff!

The match swayed one way and then another as both teams passed the ball at will. Leeds were defending like their lives depended on it as the Tractor Boys looked for a way back into the game. Leeds had tightened their formation up though and were making it difficult for home side to get shots in on goal as the home crowd became more frustrated.  At the other end Green fired in a stinging shot just wide of the post while Hunt hit a thunderbolt at Loach. Poleon replaced Varney with just over 10 minutes of nail biting tension left. He caused panic in the Blues defence with his first touch as he ran at the nervous full back but his final touch let him down. Ipswich were now on an all out assault on Kenny's goal but the resilience of the Leeds defence was there for all to see despite what seemed like corner after corner flying into the box. Leeds had chances to break and seal the win with a killer third goal but over eagerness too often gave the ball back to a grateful Ipswich leaving an excruciating last 5 minutes of play. 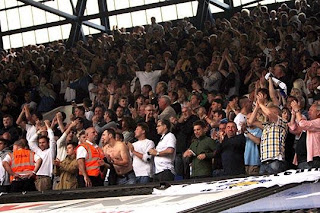 It was all hands to pumps at the back but finally Mr Dean blew for the last time and Leeds had hung on for a precious and rare win at Portman Road. 2.1 Leeds.  Leeds just about deserved the win with good performances from Ross Mac, Pearce, Green and Austin but mainly this was the archetypal team performance. So we left East Anglia with three points and still unbeaten. The long drive home was brightened up when we passed some Donny buses on their way back from their abandoned game at Charlton when they were 3.1 up. "Three one and they called it off" we sang as hand gestures were exchanged between bus and car. I do love a bit of football banter. I suspect there will be a continuation of said banter on Tuesday.

Whilst not getting over excited after just 4 games of the 46 game season this was a good win for Leeds.  The side look a lot more resolute than in recent years and although they still lack width they do look a solid unit who are hard to beat. With Byram's return not far off and another signing possibly heading to Elland Road good times could be heading our way.

Donny in the Capital One Cup on Tuesday.  Should be a good game given the South Yorkshire side's good start to the season? Statistically we will win 2.1 after conceding the first goal as we've already done three times this season.


Posted by Andrew Butterwick at 23:20

Nice to see your blog back up running, by far the best match reports for those of us unable to get to games

Great to be able to read your blog again, Sundays haven't been the same