Planet Leeds returned to some sort of normality this week and not just because yours truly had returned from holiday and was eagerly awaiting the clash with Dave Jones' Wendies. News of the new Leeds owners shuffling their ownership shares between them selves and the manager declaring he needed to move players out before he can afford to bring new ones in had an all too familiar ring to it. Capt Birdseye may have sailed off into the Monaco sunset but the mighty whites still lack the financial clout of many of their championship rivals. There is a significant difference this time though and his name is Brian McDermott. His press conferences are refreshingly honest and overflowing with common sense. His tactics on the field of play focus more on "pass and move" rather than "hoof and hope" and he has a steely determination to get the best out of his resources at Leeds United.

So it was with renewed optimism and buoyed by an unbeaten start to the season that I joined the Happy Chocker, the Quiet One and the rest of the motley crew of Leeds fans on Selby station ready for the trek to Leeds to continue hostilities with our South Yorkshire friends. The sense of deja vu was enhanced by the sign on platform 2 squeaking reassuringly in the wind for the 7th season running. Presumably grease is as scarce as sightings of the Pope at Selby station?

All the pre match talk revolved around potential player sales from Leeds and who the mystery player is Brian McD is waiting to bring in. Aidey White wasn't getting many votes for him to stay whereas the more realistic Leeds fans saw Diouf as an unfortunate sacrificial lamb in Brian McD's quest to get funds to find some much needed rigidity for the Leeds back four. A disappointing but noisy 23,700 crowd were inside the Theatre of Hope for the kick off. Poleon replaced Hunt up front as Diouf returned to the bench.

The match started in typical derby fashion, all bluster and brawn, as both sides struggled to cope with the swirling wind. Leeds had the better of a scrappy first 30 minutes with Poleon stretching the Wendies defence with his pace without quite executing a decent final ball. Kirkland flapped at a teasing cross before Lees got a weak header that the big goalie easily saved. At the other end Kenny gratefully flopped on a loose ball inches from the line as the South Yorkshire side pushed for an opening goal. Austin was purring in midfield as Leeds began to get the better of their pointless rivals. Then on 35 minutes the game sprung into life. Wednesday won a corner and swung a deep ball to the back post where Antonio headed unchallenged back into the box for Zayatte to loop an agonisingly simple header over Kenny to the unguarded right hand post. If anyone wanted to market a video of how not to defend a corner this footage would be gold dust. 1.0 Wendies.

Both the team and the home crowd were shaken by the goal and Wendies had their best spell as half time approached. The referee, Roger East, angered the frustrated home fans with some weird interpretations of the rules as the Owls looked for a killer 2nd goal. It so nearly came as well as a corner deep into added time caused more havoc in the Leeds box. HT 1.0 Wendies.

My first session of the season with the Urinal philosophers was surprisingly subdued. Although one wag opened with "that was f****** shite" the rest just seemed to have accepted the fact that we were one goal down.  Most unusual.  Maybe shell shock is beginning to wear away at the very soul of the die hard fans of the mighty whites? I still felt we could rescue something from the game though.  We were solid in the first half with Austin impressing and even Pelts was having one of his better games at right back. If Leeds could harness Poleon's pace and just show a smidgen of quality we might yet send the Owls home empty handed. 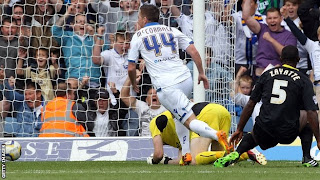 The 2nd half started with a passage of play that challenged the Guinness World Record for the number of misplaced passes in a 5 minute period. If there had been an adjudicator sat in the stands I am sure it would have made the next edition.  This wasn't a match that was destined for the Sky TV  "Classic game" Vault. Tonge had replaced Green at half time and his greater industry troubled the Owls. Murphy threatened Kirkland's goal but his shot deflected wide.  What Leeds desperately needed was a touch of class and on 56 minutes that's exactly what we got.

Ross Mac picked a ball up on the half way and then skipped past his marker as if he wasn't there before holding off trailing defenders to beat Kirkland with a sweetly struck shot past the big goalie. The roof came off the old stadium as the home fans celebrated a much needed equaliser. The Scot's pointed goal celebration in front of the owners executive box would suggest he wants to stay put and not disappear to Boro?  The goal was like a shot of adrenaline through both the team and the fans as Leeds poured forward on the crest of a wall of sound from the stands. Two corners in quick succession raised hopes but Austin's header was the nearest Leeds got to snatching the lead. Varney and Poleon were troublesome rather than threatening up front as the boost from the goal began to fizzle out. Smith replaced Varney with 15 minutes to go but the resolute Wendies defence continued to hold firm despite some probing from RossMac, Austin and Murphy. At the other end Antonio's shot needed a superb Kenny save to keep the scores level as the game hurtled towards full time. Mr Warnock brought some very average players to the club but Kenny has been an absolute rock during his time at Leeds.

5 minutes of added time brought it's usual mix of gut wrenching anxiety and false hope as first Wendies went near and then RossMac thundered a free kick into the defensive wall.  The game ended all square with Austin man of the match. Fans streamed away from the ground not knowing whether to be pleased we got a point or disappointed we didn't get all three. "At least we're still unbeaten" was a common comment as we queued for the shuttle buses back to the station. This was a solid no nonsense performance that yielded a point and showed the solidity of the team under Brian McD. Austin, Murphy, Green and Tonge are all battlers. We just lack that touch of quality that makes so much difference in this very tight league.

43 games to go then. A decent start in lots of ways but still a hell of a long way to go starting at Ipswich next week.  We never win at Ipswich though. Let's see if Brian McD can change that jinx then?