Nerves were jangling amongst the throng heading down Elland Road towards the famous old stadium for tonight's game against the Cherries of Bournemouth. Four defeats on the bounce had removed most of the early season optimism amongst the home fans and given the 10th game of the campaign almost a "must win" status. A 5th defeat would set the alarm bells ringing loudly amongst the notoriously pessimistic Leeds fans and feed the already rabid demand to sign new players from the impatient masses. After the embarrassing capitulation at Millwall surely Brian McD would change the team round? After all our lack of goals or more to the point ability to convert chances was our Achilles heal so far this term. The Happy Chocker and I tried to 2nd guess our leader's selection...............Diouf got a strong vote to start as did Mowatt. Questions were raised about messr's Austin and Murphy in midfield. When the official team sheet arrived there were certainly surprises to feed the appetite of the 21,000 managers who had gathered for the game. Hunt, Lees and Green were all recalled at the expense of Wootton, Murphy and Varney. Interesting! 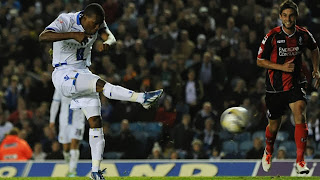 Predictions of a 3.1 win were in my mind as we kicked off. Mmmm. Leeds made the early running against one of the leakiest defences in the league. Ross Mac, starting up front with Hunt, had an early chance to settle the nerves but his shot was saved by Allsop in the Cherries goal. Hunt was next to go near as Leeds kept the pressure on the newly promoted away side.  Alex Mowatt settled into his central midfield role like a veteran and for once we looked in reasonable control of the game. All we needed was an early goal.  Tom Lees had a decent shot blocked as a slightly jittery home side yearned for the precious opening goal. Bournemouth looked bright when they were on the ball and forced a couple of corners in quick succession that pleased their hardy 200 fans who had made the long mid week trek from the south coast. Grabban lifted their first real shot over the bar as the game headed for the half hour mark.

Noel Hunt is a player who works hard but just doesn't seem to get any reward in terms of goals or even shots on goals.  For this reason there are many Leeds fans questioning his inclusion in the team so when he burst through the static Cherries defence and won a penalty it seemed fortune was shining on the Irish forward.  A red card for the Bournemouth goalie compounded the joy for the home fans. Surely Ross Mac would have no problem in converting the penalty against ex Leeds loanee replacement goalie Flahavan? Well yes he did as he struck his shot low but the goalie got down well to deny Leeds.  Even the rebound went begging as the grateful Cherries defence cleared. Still against ten men it would only be a matter of time before we scored wouldn't it?

Leeds piled on the pressure and sensibly spread the play from wing to wing time and again opening up the fragile Bournemouth defence but a combination of nervousness and at times farcical finishing kept the score goalless. Austin and Green left a golden chance of shot to each other............Hunt headed wide when it was easier to score before minutes later clearing the ball over the bar from a yard with his knee. He wasn't the only culprit though as Austin, Ross Mac and Tonge all went near in a chaotic finish to the half.  How it stayed 0.0 will remain a mystery to many of the fans. If it was a horse race there would have held a stewards enquiry but sadly they would have concluded all was OK after watching videos of Leeds' finishing from previous games this year. Although all the momentum was with Leeds at Half Time it was still 0.0 and the doom and gloomers were beginning to circle the Chuckwagons!

Leeds failed to continue the momentum at the start of the 2nd period as Bournemouth stuck to their guns. On the left flank Warnock was having his best game of the season as he revelled in the space afforded him by the Cherries defence. On 52 minutes he scampered down the open spaces of the Leeds flank and whipped in a carbon copy of the ball that Ross Mac failed to convert on Saturday at Millwall........this time he made no mistake though  and Leeds were a goal to the good. 1.0 Leeds.  Now the flood gates would open. Mowatt was strolling about the midfield with aplomb, Ross Mac was busying himself up front and Warnock continued to cause problems down the left. Bournemouth's new recruit, Collinson, brought a spectacular save from Kenny as we were reminded that for all the chances we'd had a single goal lead is never enough.

Leeds continued to press but the precious 2nd goal didn't materialise. On 72 minutes Poleon replaced Hunt who seemed to get worse the harder he tried. Leeds fans sat back and waited for Poleon's undoubted pace to finally undo the Cherries resistance. Nobody showed Bournemouth that script and they immediately went down field and shocked the home side as Grabban gave the ten men an equaliser after rank bad defending of a long hopeful punt but an emphatic finish by the Bournemouth striker. 1.1 and the Cherries fans celebrated. "we've only got ten men" they sang in glee receiving an instant response from the south stand of "you've only got ten fans"

Leeds had 18 minutes to save the game. I suspect there were many in the crowd like myself who were thinking we could easily concede again. Fingernails were warned of imminent attack as the game entered the last 10 minutes. Poleon's pace did unnerve the away defence and he created a couple of chances but still the scoreboard stared back at me with a depressing "Leeds Utd 1:1 AFC Bournemouth" Leeds were building a head of steam though and from another scramble in the box the ball fell to Poleon who hit an unstoppable volley from 10 yards.................get innnnnnnnnnnnnnnn! 2.1 Leeds and relief shot around the stadium in more than welcome quantities.

The game wasn't over though.  There was still plenty of time for Bournemouth to give the home fans some heart stopping moments as Leeds somehow closed out the game for a precious win and three points. The consensus view listening to fans stream away from the ground was that the three points were more important than the performance.  We had struggled to put away a team that had to play with the ten men for most of the match.

Warnock sneaked the man of the match from young Mowatt in a hugely frustrating performance where once again the talk was all about the chances missed rather than the ones that were taken. So after ten games we sit in 11th place on 14 points well and truly stuck in mid table.  All of the games so far have been incredibly close reflecting the tightness of the league. If we are to rise above our current position someone will need to improve our goal scoring record. problem is there is no obvious candidate for that job. Next up is Derby at Pride Park a team who we have lost to in the last 124 games.  Even with Steve "Wally with the Brolly" McLaren in charge it will be a difficult task. You never know Hunt might get a hat trick?

MOT
Posted by Andrew Butterwick at 00:44