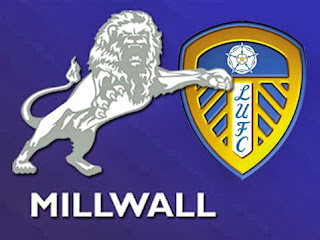 The day didn't start well for our latest away day adventure. The cancellation of the 10.05am Kings Cross train from Leeds meant a quick double back to York to squeeze on the next London bound train. The early panic was soon behind us though as we hurtled towards the capital and our game against the suddenly improving Millwall. After Wednesday's showing against Premier League Newcastle I was optimistic that for once our trip to South Bermondsey would be a successful one. The Happy Chocker was more cautious but still wagered  a 3.1 win for the mighty whites on Skybet. All was set for another exciting day following the mighty whites. What could possibly go wrong?

Per match refreshments were taken at the quaintly named "Barrowboy and Banker" Pub near London Bridge which was heaving with a mixture of football fans, the vast majority carrying the scars and weariness badges that come with following Leeds United. The Leeds anthems were soon reverberating around the traditional London pub.  Brian McD had shuffled his pack and brought in Alex Mowatt for his championship debut in a 5 man midfield that included Ross Mac, Tonge, Austin and Murphy. Varney's was given a lone striking role and Peltier was preferred at full back to Byram. 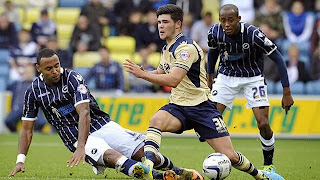 The 2,000 travelling fans lifted the atmosphere inside the stadium as the game kicked off. The minority of Millwall fans obsessed with Istanbul struck up their usual taunts and gesticulating............I wonder if they realise how pathetic they look? The first half was instantly forgettable as a diet of very scrappy play was served up to the less than patient crowd with the ball suffering from air sickness for the majority of the time. Ross Mac went close for Leeds before he set up an excellent chance for Pearce who wastefully blazed over the bar. Millwall had a strong penalty shout turned down and also Waghorn rattled Kenny's post but neither goalie had much to do as the turgid game dragged through 45 minutes. Mowatt showed a couple of neat touches but the 5 man midfield struggled to put more than two passes together whilst Varney looked like a lost sheep up front. Millwall looked the more confident of quite frankly two poor sides. Surely the 2nd half had to be better?

The Leeds fans in my earshot were not very complimentary in their 1st half assessment with the words rubbish, shite and clueless trending amongst the away hordes. Leeds were now playing towards their ever so slightly disgruntled fans. Within a minute Leeds should have taken the lead as Mowatt arrowhead the ball into Ross Macs path but his glancing shot screwed millimetres wide. Symptomatic of our season so far I'm afraid. We just don't seem to be able to finish. The game wasn't much better in the 2nd period but the home team re starting look less awful than Leeds and pushed forward looking for a goal.

The opening goal came on 65 minutes after Leeds lost the ball in midfield. Millwall moved swiftly forward and with help of a couple of simple give and go passes orchestrated by Pontefract lad, Martyn Woolford, sliced the porous Leeds defence in two allowing him to finish sweetly. The Den erupted out of it's stupor and suddenly it was game on. 1.0 Millwall. What we wanted was a swift response from Leeds but what we got was more misplaced passes and hopeful balls as Millwall, buoyed by the goal, went for the kill. Leeds were rocking and visibly crumbling  in the hostile South Bermondsey atmosphere. The 2nd goal was similar to the first.....Leeds lose possession Millwall move the ball quickly.........open up the creaking defence and Malone gave Kenny no chance with the shot. 2.0 Millwall and the South Londoners were in ecstasy. It seemed a long way back for Leeds from this.

Smith and Byram replaced Varney and Tonge as Leeds spluttered into a smidgen of life. Millwall nearly conceded an own goal after pressure from Leeds but a desperate lunge from a Millwall defender turned the ball onto the post and back into Fordes's hands in the home goal. Ross Mac set up Austin but Fordes smothered the chance. Warnock departed to make way for Green. There was no sense of of a comeback though as Leeds sunk embarrassingly to a 2.0 defeat in a hugely disappointing whimper.

The muted reaction at the end from the usually vociferous away fans spoke volumes for their thoughts on the game. With 9 games completed we have all the signs of a bottom half of the table team rather than anything near the top six. We have now lost 5 from the last 6. None of players should be happy with their performances with the exception of young Mowatt. Austin has turned into a liability overnight, Warnock had one of his headless chicken games whilst not even the usually reliable Ross Mac will eat his Nandos with a clear conscience. As I trudged away from the Den I felt similar to the time we lost to Hereford...........difficult to see where we go from here.

Not a lot was said on the long trip home. At least the train wasn't cancelled. Brian McD has still got a lot of work to do with the team. The lack of goals is a real concern. We're are they going to come from? On the evidence so far not any of the players currently wearing a white shirt. Bournemouth and Derby will provide difficult tests this week especially as we haven't beaten Derby in 657 games. Hopefully Brian McD can find some magic formula to mould his team into a winning unit. If not we are in for a long hard winter. Roll on Bournemouth. We can't lose to them can we?