Rochdale dump woeful Leeds out of the cup. 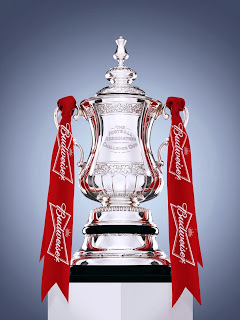 FA Cup 3rd round day is a special day in the football calendar for the vast majority of fans. It's a day when dreams of an exciting cup and even a visit to Wembley form a toxic mix with the fear of slipping on the proverbial banana skin against a lower league team flooding the senses as kick off time approaches. Despite the disrespect most of the money obsessed Premier League teams give the competition the FA Cup still has some magic.........well it does in my eyes. So it was with great anticipation that the Happy Chocker, Quiet One and yours truly set off up the hill and down to the Dale for Leeds' encounter with Rochdale. Cup memories dominated the conversation, last year's victory against Spurs even better the famous one nil at The Theatre of Shite, Alan Clarke's goal in the 72 final, Snoddy's goal at the Emirates not forgetting Beckford's last minute equaliser at White Hart Lane. Of course where there is a Ying there is a Yang and inevitably Histon, Hereford, Kettering, Colchester United, Sunderland and even Wimbledon got a mention in the Leeds United FA Cup debit account. Would Rochdale be the next team to enter that list or would we march onto the 4th round and another plum tie? After our stuttering form over Xmas there was more of a nervous tension in the car than a robust confidence as we tried to find somewhere to park near enough to the Rochdale ground.

Brian McD made two changes to the team who succumbed to Blackburn on New Year's day as Wootton and Peltier replaced Mowatt and Lees. Nearly 4,000 Leeds fans were packed into the compact Spotland stadium as the game kicked off on a perfect playing surface. Rochdale took the early initiative backed by a sell out crowd. Leeds not only struggled to cope with Rochdale's neat passing style but also couldn't handle their "in your face" pressing game when Leeds did manage to get hold of the ball. Kenny was the busier of the two keeper's in the first 30 minutes saving well from Scott Hogan after Bunney had found the net only for the effort to be ruled out by the linesman's flag. At the other end Smith won a towering header but the ball was cleared off the line. Rochdale were enjoying the better of the play though as Leeds seemed incapable of putting any meaningful move together other than a couple of runs from Byram which ended in crude tackles and bookings for the home defenders. This wasn't looking good. The magic of the cup was working it's spell but not on Leeds as the banana began to be peeled. The ghosts of Histon & Hereford were ominously looking down from above.

Henderson and Hogan were causing the most damage in the Leeds defence as Wootton, Zaliukas and Pearce looked all at sea in attempting to stem the home tide. Kenny was looking confident in the Leeds goal though as the League 2 high flyer's grew in confidence. The noisy away following grew quieter the longer the half went on as another horror show unfolded before their eyes. The Leeds midfield of Murphy, Austin and even Byram were second to every ball as the Dale took control of the game.  It was no surprise when the impressive Hogan rose to meet a Vincenti cross and plant the ball past Kenny right on half time to give the home side an interval lead. In truth they deserved to be more than the one goal in front and for the second game running Leeds left the field at half time to a cacophony of boo's. 1.0 Rochdale. "This is very Histonesque" I suggested to HC. The Urinal philosophers couldn't even be bothered to complain about the first half performance. Either they'd all seen such a performance once too often or they couldn't speak through the fog of cigarette smoke in the gents! 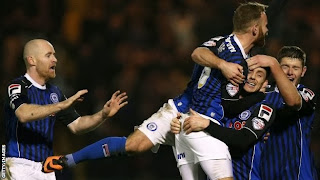 Leeds needed to get back in the game quickly but the 2nd half progressed pretty much as the 1st period with Rochdale growing in confidence and Leeds frustrating the travelling hordes almost every time they touched the ball. For the record Pugh forced the home goalie into a save after a good move down the left and Ross Mac fired a vicious shot inches past the Rochdale goal but they were an oasis of hope in a sea of absolute dross from the championship side. Hunt came on for Wootton but the inevitable 2nd Rochdale goal came on 83 minutes from a superb volley from Henderson. That was enough for me as I left the ground early to march off my frustration on the walk back to the car. Rochdale would have been 4 or 5 goals up if it wasn't for Kenny in the Leeds goal. Long before Rochdale sealed the game with Henderson's goal the away fans were showing their disgust with the Leeds performance "You're not fit to wear the shirt" and "what the fuck is going on" replaced Marching on Together as the songs of choice as the home fans celebrated a famous victory. All credit to Rochdale. They were superb and it's quite easy to see why they are doing so well in League 2.

This was the worst Leeds performance under Brian McD and ranks alongside the Histon debacle in my book. Austin was ineffective but he wasn't alone. If the Leeds team have any conscience only Paddy Kenny will pick his wages up this week. The rest were awful. We've suspected we were punching above our weight with the current squad all season but the way they were dismantled by a very good Rochdale team was embarrassing to say the least.  We didn't win a second ball all afternoon and hardly strung a decisive pass together all game. Those of us who choose to follow Leeds through thick and thin have seen this before but it still hurts like hell when you witness such a poor and spineless performance by the supposed mighty whites.

The car was quiet on the journey home. Cyberspace and the radio phone ins were alive with recrimination from annoyed Leeds fans. "We need investment in the team" "that was embarrassing" "Why didn't he make some substitutions earlier" blared out from the radio. It felt like we were in an episode of Doctor Who and we had been transported back to...........well any year in the last 10 to be honest! Have I mentioned before it's never easy following Leeds?

Sheff Wed away next week. Hope we have a couple of new faces in by then?

MOT
Posted by Andrew Butterwick at 19:21

What year did Hereford beat us Mr. Butt?
Were you watching Newcastle that day?
First time I've ever seen you leave before the end by the way, but it about summed it up!
Wriggy.

You must be losing your memory Wriggy. 2007 replay at ER? http://www.dailymail.co.uk/sport/football/article-495329/FA-Cup-Round-Ainsworth-sinks-Leeds.html

Senility setting in I think Andy. I stand corrected.

Senility setting in I think Andy.
I stand corrected!

Great commentary Mr Butterwick will follow your bloggs from now on.
By the way did you know I'm a. Rochdale lad? Ha