Gritty Leeds beat the weather to secure another 3 points.

The clock crept quietly past 5am as the HC, Quiet One, Jusser and yours truly gunned the car southwards for the challenging trek to Yeovil for the latest saga in Leeds United's season. With the farcical events off the pitch overshadowing anything on it since our drubbing of Huddersfield I was just glad to get back to game day without talk of any sackings, unsackings, takeovers, failed takeovers, mysterious new players, fire sales, litigious sponsors, administration, owners, Smiling slimy PR people and who the fuck actually owns us? No the big debate on the way down was "would the game be on after all the rain in the South West" Heaven!

When we finally arrived at Yeovil we were met with a very deceptive blue sky and bright sunshine. Maybe we wouldn't get wet on the open terracing after all? Brian McD had kept the same team that demolished Huddersfield for his first game for Leeds in his latest spell in charge. Could he get off to a winning start against a Yeovil side struggling at the foot of the table? Would Ross Mac add to his phenomenal goal scoring tally?  Would Kebe continue where he left off last week?

The first indications we got that this wasn't going to be a classic game was when we climbed the terracing behind the goal to watch the pre match warm up. Rain clouds were gathering just in time for kick off and there was an almost gale force wind blowing straight down the pitch giving a wind chill factor in the region of - 15'c. As the game kicked off horizontal rain was blowing into my face feeling just like pneumatic ice picks piercing my exposed skin. The hardy Leeds fans huddled round like a group of Emperor Penguins in a vain attempt to keep out the worst of the weather whilst singing "We're Leeds United we don't need a roof". Meanwhile on the pitch it was obvious that the team playing against the wind had an almost impossible task of clearing the ball. Leeds had that pleasure for the first 45 minutes and they set about their task with gritty determination. Paddy Kenny tried a number of kicking strategies from goal kicks to get the ball up to the half way line but with limited success. 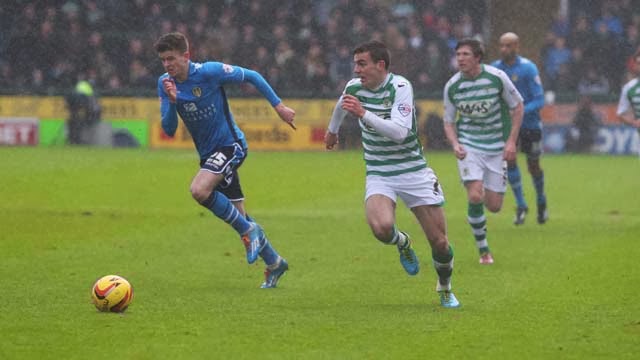 Despite the weather Leeds did make in roads into the Yeovil half during the opening exchanges with Ross Mac firing two shots close to Stech's goal. Yeovil's two giant strikers, Miller and Moore, were relishing the wind assisted balls towards the Leeds goal and were causing concerns for the Leeds centre back pairing of Lees and Pearce. Moore headed wide from a good chance in the box whilst a curling shot went tantalisingly close to Paddy Kenny's goal. Stewart gave his defence some respite as he broke but pulled his shot wide but it was the home side who were looking dangerous with some assistance from Mowatt's wasteful balls in the Leeds midfield. As the half hour mark approached I lost the feeling in my nose and toes as the wind chill factor took it's full toll on the away fans despite the sun shining brightly. Yeovil were building some momentum though and from a swirling corner Miller rose above the Leeds defence and thumped a header past Kenny. 1.0 Yeovil and the Somerset crowd erupted in delight.

Leeds now looked vulnerable. An innocent through ball caused hesitancy in the Leeds back four as the ball held up..............Kenny was late coming for the ball and his lunging clearance ricocheted off the Yeovil forward and inches over the empty goal. Leeds did finally get a decent chance when Byram charged down a clearance leaving Ross Mac clear with just the goalie to beat but his attempted chip fell lamely into the keeper's hands.

The 575 mile round trip began to look as if it would be pointless when Byram dived in on Dawson in the box and the ref pointed straight to the spot with no protests from either the Leeds team or their hordes of fans behind the goals. The giant Miller stepped up to take the kick. After struggling to place the ball on the spot due to the howling wind he then blasted the ball off the bar and over into the delighted Leeds fans. Get in! That was just the bit of luck we needed and we survived the rest of half to go in just the single goal down. 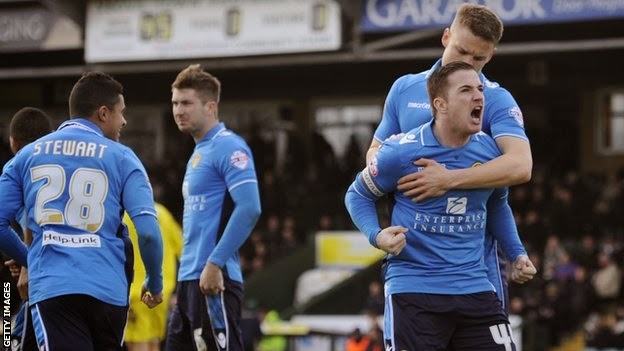 Matt Smith replaced the out of sorts Mowatt at the start of the 2nd half as Leeds changed to a more conventional 4-4-2 formation as they sought to take full advantage of the wind behind their backs. The freezing fans didn't have long to wait before Leeds were level. The first attempt at a kick from his hands from the Yeovil goalie shot straight into the air like a shanked wedge shot and blew back to the edge of the Yeovil box where Ross Mac had taken up a sensible position. He controlled the wayward ball and then curled a stunning shot into the top corner of the net sending the blue faced away fans wild. 1.1 and only a minute of the 2nd half gone. The Yeovil goalie may have been at fault for the goal but he went some way to redeem himself minutes later as Austin finished off a good move with a thunderbolt shot that Stech somehow managed to parry away. Stewart was the next player to test the home keeper as he scampered into box only to fire a lame shot at the keeper with Murphy wide open on the edge of the 6 yard box.

Leeds were now on top with the the wind in their sails. Even Pearce and Lees played a one two in the opposition box as  they searched for the all important 2nd goal. Capt Ross had a couple of shots blocked as confidence surged through the team. Byram and Kebe were having plenty of joy down the right flank with Smith prominent in most attacks. On the hour Kebe drew a foul from Dawson 40 yards out on the right flank. Warnock stepped up to curl a vicious ball into the area and with the help of the howling wind straight over Stech into the net. 2.1 Leeds.................."2.1 it's your goalie's fault" would be harsh on the goalie but it didn't stop the song ringing in the poor man's ears as the Leeds fans celebrated.

Apart from an excellent last ditch tackle from Warnock the Leeds goal was never really tested again although a couple of late corners gave yours truly the familiar "oh no not now" moments. Kebe missed a glorious chance after good work by Ross Mac and Stech made another good save from our leading scorer before the end as Leeds ran out 2.1 winners. The Leeds fans streamed away from the ground with smiles on their freezing faces. Two wins in an extraordinary week for the club. Captain Ross won the MOM but Murphy, Austin, Pearce and Lees will all sleep well tonight safe in the knowledge they had had good games.

A gritty performance from Leeds who played the conditions better than their hosts in a game that could never be a classic in the howling wind and driving rain. The long journey home gave me time to thaw out and reflect on a hard fought victory. Brian McD has a 100% record as manager after his opening victory but I still think there is a lot of turbulence on the horizon. Seat belts fastened I'm afraid starting at Brighton on Tuesday. Unfortunately that inconvenient thing called work will prevent me from getting to the Amex for this one so I'm relying on Radio Leeds to bring us news of another 3 points. Come on Adam you can do it!

MOT
Posted by Andrew Butterwick at 22:08

Great read felt as though I was there

Annie,
Thanks for the comments. Hope you weren't cold reading this then? lol
MOT