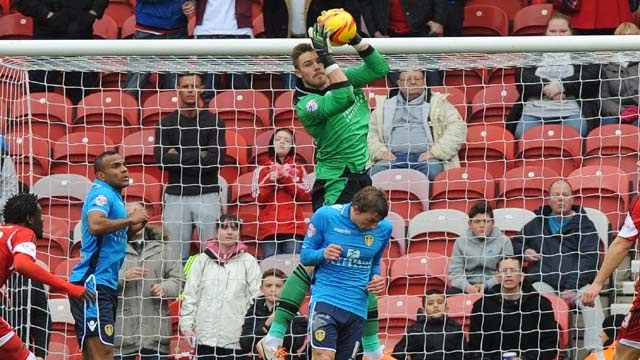 Money seems to have dominated the football headlines this week. First Man City discovered that investing hundreds of millions of pounds into your team doesn't guarantee success at the highest level as Barcalona strolled into town and passed them to death at Eastlands. 24 hours later another of the Premier League's cash rich elite, Arsenal, suffered defeat in the same competition as Bayern Munich unleashed a footballing masterclass at The Emirates as if to emphasise the point. I wonder if the Arsenal board of directors felt uncomfortable as the noisy away support celebrated given that Bayern had subsidised their fans trip by paying 50% of what they saw as extortionate ticket prices? On the subject of ticket prices there were plenty of jaws dropping on Planet Leeds when the details of the Burnley  tickets were unveiled......£32 for what is by far the worst and most derelict away stand in the championship even taking into account Yeovil's homely terracing. Finally we got confirmation that football in this country has lost all touch with reality as the Salford Yanks proudly announced they had secured Mr Potato Head's services for another 5 years at the cost of an unbelievable, eye watering £300k a week! Words fail me.

Of course back at Leeds money, or lack of it, continues to eat away at the fabric of our club. The takeover saga rumbles on in the background without any conclusion in sight. Meetings come and go and photos of daughters, sons and lovers in Leeds shirts abound but the club are still in a financial Bermuda triangle of their own making. Intrigue is never far away in LS11 though and news that we had secured England international keeper, Jack Butland, on loan until the end of the season fed the raging rumour mill. Is Kenny's injury worse than we thought or does BM want a keeper that is more commanding on crosses? Or possibly a bit of both?

In between the intrigue and takeover dealings thankfully an oasis of football broke out and as usual the Happy Chocker, Quiet One and yours truly were heading North to the Riverside for the game against the Smoggies. "We usually beat Boro" I suggested optimistically as we hurtled up the A19 to Teeside for the lunchtime kick off. The bright sunshine on Teeside disguised a keen, stiff breeze as we dumped the car near the ground and strode towards the Riverside stadium. Brian McD had rung the changes from our last outing at Brighton. Butland replaced Kenny in goal with Pelts coming in for the injured Byram. Wootton got a rare start in the back four in place of Lees whilst Hunt started alongside Ross Mac up front. Kebe and Stewart were on the flanks for what Brian McD intended as an "all out attacking" performance. The first ten minutes suggested otherwise as Boro, who had failed to score in their last five outings, took control in blustery conditions.

Kamara thundered a header high wide and handsome from an early corner as Leeds had to dig in to repel the Smoggie's enterprising start. For all their early possession our new goalie wasn't called into much action as the game progressed through the half. "I've seen better Sunday League games" HC commented. Nobody disagreed. Ross Mac had a shot blocked in a rare Leeds attack as the televised game stuttered and spluttered but never really sprung into life. Hunt looked to be pushed as he tried to connect with a lovely Stewart cross whilst at the other end Butland saved brilliantly from a fierce Butterfield shot. Half time arrived with the game goalless as most fans headed for the toilet or the bar just for a change of scenery and a warm up. Not sure of what the TV pundits made of the first 45 minutes but the fiercely critical away fans weren't impressed. "Two shite teams" one terrace pundit summed up the first half whilst another thought " what happened to the all out attack?" It's safe to say that most Leeds fans were extremely underwhelmed with the first half performance. Still it could only get better couldn't it? 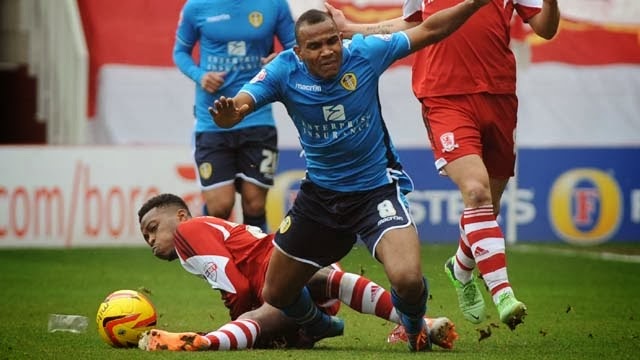 Leeds kicked off the 2nd half and soon Leeds sniffed at half a chance as Kebe headed tamely wide after good work by Peltier.  Minutes later Ross Mac wriggled into some space on the left before dinking a lovely ball onto Hunt's head in the box. Bizarrely Hunt tried to head it back to his captain in some sort of unlikely one two. Groans and moans rung out from the Leeds fans as my hands cradled my head for 76th time in the game. Frustration was the theme for the day. Chances were starting to flow at the other end but Butland was in impressive form as he calmly dealt with whatever Boro could muster along with a neat mis-kick from Warnock.

Odomah and Tomlin came off the Boro bench with around 20 minutes to go to give the home side some impetus as both sides finally realised the game was there for the taking. Danny Graham blazed a good chance over the bar for Boro whilst Ross Mac saw his stinging shot go wide. With just 12 minutes left Odomah was released by a superb Tomlin ball but Butland saved the day with another impressive save. Smith replaced Hunt for a late cameo and caused problems in the Boro defence. Leeds huffed and puffed for the last ten minutes but failed to test Shay Given in the home goal as the game ended a disappointing 0.0.

Overall a poor game that burst into life late on but it was too little too late to impress most fans. Boro's run of games without a goal continued whilst Leeds once again looked disjointed and at times lacking in confidence. Kebe had a frustrating afternoon as he always seemed to pick the wrong ball after beating his man. Ross Mac was marshalled well by Leeds old boy Woodgate and while Hunt works very hard he just doesn't look like he will ever score a goal. Wooton and Pearce looked solid in defence. Butland was head and shoulders above the rest of the team in a very impressive debut. Difficult to see Kenny regaining his place on this form.

A point didn't really suit either team in the end but realistically Leeds look like a team who are fading fast. With trips to QPR and the rampant Burnley to look forward to in the coming weeks it's difficult to see anything other than a rather uninspiring end to a forgettable season. Still there's always the takeover to look forward to?

MOT
Posted by Andrew Butterwick at 17:17