After four games on the road and only one defeat there was a whiff of optimism in the air as we returned to the Theatre of Hope for the first time since the 5.1 thrashing of Uddersfield. It was also birthday weekend for yours truly and the Quiet One so our spirits were high as the train trundled along towards Leeds. Yet again the main topic of pre match conversation was the latest events in the protracted takeover of Leeds by Mr Cellino. Apparently an unpaid VAT bill of €40k on a luxury yacht is the latest obstacle in the Italian's way potentially preventing him from taking up the reins at the once mighty Leeds United. Will the takeover saga ever end in my lifetime?

The first indication that this day was not going to go to plan was in the members bar as the bar staff seemed to be on a go slow creating long queues for the essential drinks needed to watch Leeds United nowadays. The team news didn't bring any joy despite the clamour to give Mr Kebe and Stewart a rest from starting duty. Pelts was also preferred to Byram at full back a decision I continue to finding puzzling in the extreme. Jason Pearce was missing so Wootton got a rare start at centre back. Still Beckford wasn't in the Bolton team and they are flirting with relegation so surely we can grind 3 points out of this one can't we? Well just short of 29,000 fans inside Elland Road thought so...................until the game kicked off that is!

The game started brightly with Leeds attacking the South Stand against a Bolton team wearing Hi-Viz vests and their full back wearing a mask stolen from the props department of the latest Phantom of the Opera production. Neither goalie was troubled in the first twenty minutes though as both teams struggled to find any cohesion in their play. Murphy went closest for Leeds with a curling shot over the bar whilst Jutkiewicz had a tame shot at Butland. Leeds play was nervy with both Kebe and Stewart jittery when they had the ball. Kebe did have a couple of half decent runs but always finishing with a very average cross. The game stuttered to half time with mediocre written all over it. What we needed was a goal to inject some life into the game. On 45 minutes we got one. Joe Mason escaped a half hearted Leeds back four and benefited from a deflected through ball leaving him free on goal where he calmly slotted home the opener past a helpless Butland. 1.0 Bolton. A lead they hardly deserved. Boos rang out as the half time whistle blew. A combination of frustration and despair at another far from satisfactory performance from Leeds United.

The urinal philosophers were in full flow when I arrived in the Gents. "On what planet is Peltier better than Byram at full back" screamed one irate fan, nobody disagreed. "How and why does Jimmy Kebe get paid for playing football? My Granny would give us more penetration on the flanks" offered another slightly dissatisfied customer. All in all a frustrating half but "I still think we'll win this" I stupidly suggested to the Happy Chocker. 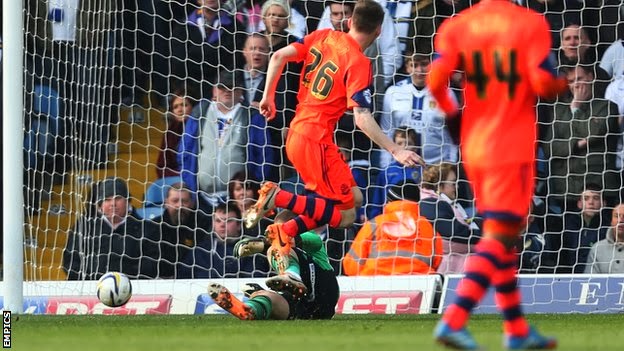 Brian McD had reacted to the advice from the Gents and replaced Peltier with Byram at the start of the 2nd period. Presumably to give Leeds more of an attacking threat down the flank. Leeds were now attacking the kop. Byram was immediately into the thick of it linking well with Kebe to cause concern in the Bolton defence. This was better I thought as the home crowd came to life. That is until Bolton were awarded a soft free kick 35 yards out from the Leeds goal. Spearing swung a ball deep into the Leeds box were it was met perfectly by Jutkiewicz who thumped the ball past Butland unchallenged. Where the f*** were the Leeds defence? 2.0 Bolton. As Alan Hansen would say.........shocking defending. But that was only the start of a thoroughly spineless display by the men in white though. 4 minutes later Spearing reprised his free kick into the box and the powder puff home defence this time allowed Knight to roll the ball over the line after a scramble in the box. 3.0 Bolton and only 56 minutes gone.

Leeds fans expect some fight from whoever pulls on the famous white shirt but what we were witnessing was a pitiful and spineles capitulation. "Will the owner of a Silver Ford reg number............. please return to his vehicle immediately" the tannoy man announced. HC was pleading with him to read his reg number out. He'd seen enough. On the hour Jutkiewicz forced a good save from Butland before Stewart and Kebe got the hook replaced by Mowatt and Smith as Leeds changed to 4-3-3. Bad as they had played they didn't deserve the cheers they got as they left the pitch. Leeds were now in free fall. On 72 minutes Davies headed the 4th with the Leeds defence AWOL again. That was enough for HC as he headed for the exit along with hundreds of other disgruntled fans. Moritz smashed in a 5th on 89 minutes before Smith got a late consolation for Leeds by which time I was heading for the shuttle buses. Final score 5.1 to Bolton.

For anyone still with a glimmer of hope before the match that "if we can just beat Bolton and Reading we might just push for the play offs" this was the final conformation what most fans have known since before Xmas...........we are just not good enough to be anything other than mid table strugglers. There wasn't much chatter on the shuttle bus back to the station but plenty of glum faces. Murphy had a half decent first half but other than that there were no positives to come out of this game. Even Ross Mac was off colour. Brian McD's insistence on playing wingers who are not performing has back fired spectacularly on him. All the shenanigans off the pitch can't be helping but it's time for the players and the manager to be held to account for what was as inept and spineless performance I've seen at ER for a long time. Bolton took their chances well but even their most ardent fans must have been shocked at how easy it was for them to totally destroy Leeds.

I met the family and disappeared into Leeds to celebrate my birthday still suffering from yet another bout of Leeds United induced depression. I should be used to it by now but it still hurts like hell. Why do I keep coming back for more? I suppose once the Leeds United drug is in your blood you're addicted for life. Reading are next up at Elland Road on Tuesday. Inevitably there will be a low crowd after a performance like that. Will Cellino still be interested in buying Leeds after this? Will the Football League pass him as fit and proper? Will we ever have another decent team at the Theatre of Hope? Your guess is a good as mine. In the meantime bring on Reading..............................Nurse I think he needs another injection!


Posted by Andrew Butterwick at 00:50