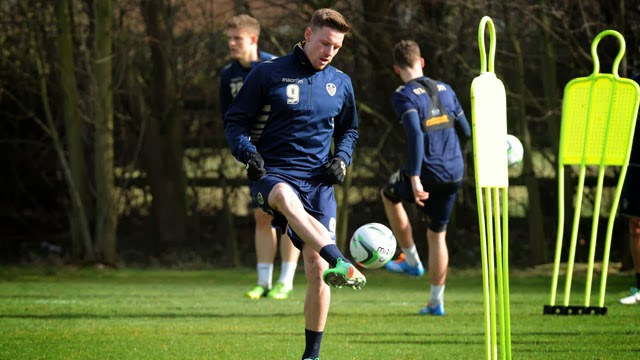 It's fair to say there has been a buzz around Planet Leeds this week. Under 21 international Connor Wickham followed Jack Butland through the doors of the Thorp Arch training ground to join Brian McD's team for the final furlong of a season that has so far flattered to deceive. With the Football League still asking for more details from GFH and Mr Cellino the takeover won't be completed until 13th March earliest so just who is running the club? Presumably Cellino as he appears to be pumping money into the club to keep things ticking along. What ever the twists and turns behind the scenes the sudden influx of players, albeit loanees, is a welcome relief to the ever demanding Leeds fans. Jack Rodwell to follow next week? Now that would make people sit up and take notice. 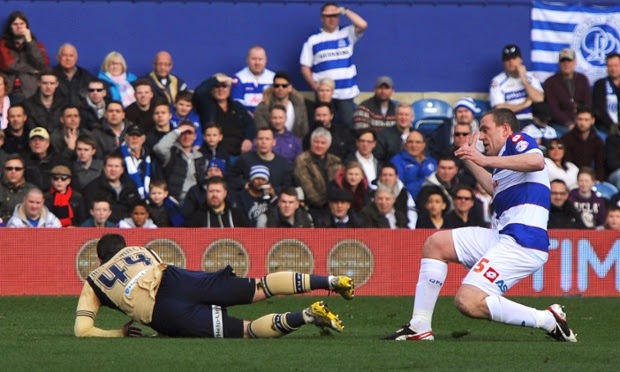 For today's trip to big spending QPR the Happy Chocker, Quiet One and yours truly were letting the train take the strain as we headed to the big smoke with the usual mixture of hopeful pre match optimism balanced by pragmatic realism. London away days always have that bit of extra spice as the rich mixture of the cosmopolitan capital is overlaid against the travelling hordes of Football tribes eagerly heading to their game and the overwhelming tribe today was the Mackems all on their way to tomorrow's Capital One Cup final against City.

For some reason QPR always have a massive police and steward presence so after passing through a security ring of steel that would have done Downing Street proud we were in the rather "compact" away end which was apparently originally designed for 3ft 5" midgets. Wickham replaced Hunt in a starting eleven that still had Byram on the bench? Brown used the warm up to hone his skills in landing the ball on a TV presenter's head as he reprised his direct hit on Keogh at the Arsenal cup game with a perfect ball onto Beagre's head! Excellent. 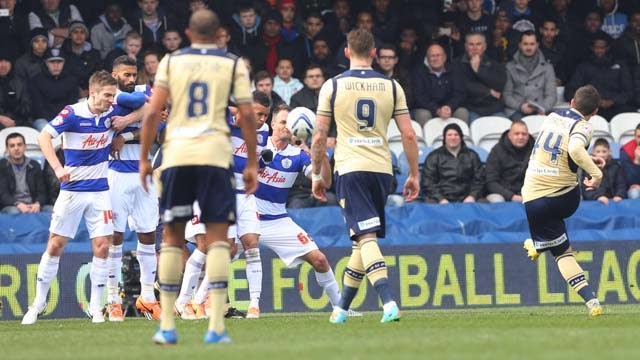 The boisterous away fans were in good spirits as the game kicked off. QPR shorn of their key men, Austin and Barton, were on the back foot in the opening exchanges as Leeds pressurised the delicate home centre back pairing of Onuaha and Dunne. New man Wickham is a big unit and gave the impression of Matt Smith only with much better control as he immediately formed a potent partnership with Ross Mac. The fruits of this new pairing split the lumbering QPR defence on 9 mins as Ross Mac latched onto a neat pass from the Sunderland loanee and was adjudged to have been fouled just as he prepared to shoot. A harsh penalty decision by referee Chris Foy but one that pleased the hordes behind Green's goal. Ross Mac stepped up and placed a weak penalty to Green's left which the QPR goalie saved. Bollox! Leeds were on top though and soon after Traore felled Austin 25 yards out giving Leeds the chance to atone for spot kick miss. Ross Mac and Warnock stepped up. Warnock dummies before Ross Mac cracked in his 24th goal of the season. Delicious. 1.0 Leeds. 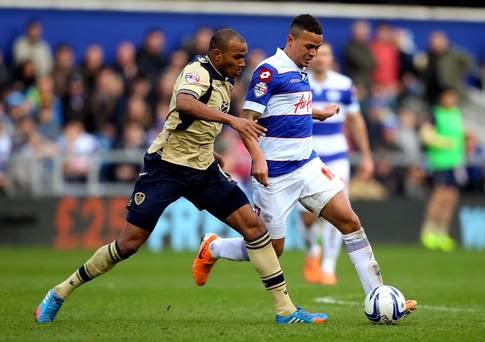 QPR wilted as Leeds pressed to increase their advantage. Wickham showed his class at this level as he got a stinging shot away across Green's goal. This was looking good for the faithful Leeds fans. "If we get another they will crumble" an optimistic fan opined in front of me. Leeds were exploiting the lack of pace at the heart of the QPR defence as this particular away day looked as if it might just be a successful one. Chances came and went for Leeds. Pearce found himself free in the box but turned back to the corner flag when the route to goal was clear. As the half progressed towards half time Butland was a virtual spectator but as we all know a one goal lead is precarious at best.........especially where Leeds are concerned!

QPR were lacking any penetration but Morrison and Jenas tried intricate moves to unlock the stubborn Leeds defence with Pearce particularly outstanding. Then just when we thought Leeds would reach half time with the lead intact disaster struck. With two minutes to go Jenas benefited from a simple one two on the edge of the box and suddenly the defence opened up like Moses parting the Red Sea as the erstwhile Spurs player clinically tucked away the chance to pull the home side level.  1.1 Half Time.

Leeds had edged the first 45 minutes with good performances from Ross Mac, Austin, Murphy and Wickham with Pearce standing firm at the back. Kebe looked like a lost sheep at a lost sheep convention. Safe to say he wasn't the most popular player with the away fans. He just doesn't seem to know where he should be playing? At times he was in the middle when there was space on the wing and vica versa?

Rumours that Redknapp's job was on the line if they didn't secure the three points were circling Shepherds Bush before the game so Our Arry needed a stirring half time team talk to inspire his team to better things in the second period.   it seemed to work as they had hardly troubled Butland in the first half but in the first 10 minutes of the second half they came at Leeds with renewed vigour. Butland made a terrific save after a defence splitting ball. Leeds were on the ropes and needed some inspiration. Austin was in stirring form in the midfield with some crunching tackles but Murphy started to regress with some criminal passes straight to a player in blue and white hoops. The momentum from the first half was lost as the lethargic home team gradually came to life and threatened to spoil what looked like a decent away performance. The clamour to change either or both of Stewart and Kebe became incessant as the away fans sensed 3 points were there for the taking. We just needed another goal. Ross Mac took a heavy knock defending a corner which seemed to restrict his effectiveness from there on. Mowatt replaced a struggling Stewart before Mr Brown replaced the fast imploding Murphy. The away fans complained about the awful facilities at Loftus Road with a little ditty "We've been to Yeovil it's better than this"

The game sort of fizzled away though as neither team really did enough to snatch the three points. As the game petered into stoppage time Clint Hill upset the travelling support with a superb finish only to be denied by the linesman's flag. That didn't stop the pathetic goal music blaring out and the home fans to our right celebrating ecstatically. There is something hugely satisfying seeing the faces of opposition fans celebrating a disallowed goal, especially in added time, only to realise their mistake and try to pretend they knew all along.  The game ended 1.1. Wickham had a late chance for Leeds which went inches wide but in the end a point was not a lot of use for either side. QPR look distinctly average without Barton or Austin and will struggle on this evidence. Leeds performed better than of late but still lacked the killer touch to win games like this. Wickham had an encouraging start and once again Butland looked superb. Ross Mac had a sparkling first half despite the penalty miss but faded in the second. Kebe seemed to be perpetually out of position and lacking in confidence. He is nowhere near the player who starred for Reading 2 years ago. Pearce deservedly won the MOM with good support from Pelts, Austin, Wickham and the evergreen Warnock.

The journey home started with after match refreshments near Kings Cross whilst waiting for our late train, originally booked for the 3pm KO, on reflection a point was a good result but tinged with the knowledge that like at Boro this was another 2 points lost.

Bolton at home next for Leeds. Will any other loanees have joined before then? Will Kebe find his lost confidence? Will Byram get a start? I do hope so.

Posted by Andrew Butterwick at 22:12