Taking half a day off work and travelling half the length of the country on a Tuesday night to watch the mighty whites play when they are in decent form is difficult enough. To do it when they are on an awful run of continuous defeat after defeat takes either outstanding loyalty or unfathomable stupidity. The Happy Chocker, Quiet One and yours truly decided it was a potent mixture of both as we sped down the roadwork infested M1 in the late afternoon sunshine for the clash with Watford. There was even a tinge of excitement in the discussions as we anticipated the dawn of another new era on Planet Leeds............The Cellino Supremacy!

The publication of Leeds United's last year's accounts took some of the euphoria out of the celebrations for our new Italian owner's victory over the Football League. Directors salaries up by 140% whilst income was falling like a stone and taking the club from a half million profit to a £10m loss with £30m debts is some achievement. Also discovering that for a good part of the year there was no one party in effective control of the club was an eye opener but on reflection probably not given the shambolic way GFH have "run" the club since they took over and the indelible stain of the previous owner's fingerprints are all over the official accounts. Carlsberg don't destroy the very fabric of a football club..........but if they did they would consult Leeds United on the most effective method.

Pre match food was taken at the wonderfully named "Football Cafe" on Vicarage Road. An institution that had an ecletic mix of fans from both sides all tucking into "something & chips" whilst debating the forthcoming game. Under fire boss Brian McD had shuffled his pack yet again bringing in Mowatt and Poleon for the injured Byram and Matt Smith. Mmmm we then spent the next twenty minutes trying to second guess the formation. Hunt up front? Ross Mac up front? Poleon up front? Where's Mowatt playing? Who's at full back? Clutching at straws was the conclusion we came to. Inside the ground the new stand to replace the missing 4th side of the ground was under construction. Nearly 2,000 Leeds fans had made the trip and as ever were in good voice as the game got underway. Wootton was at right back with what appeared to be Hunt playing a lone striker role in front of a midfield five with Ross Mac floating about all over the field. 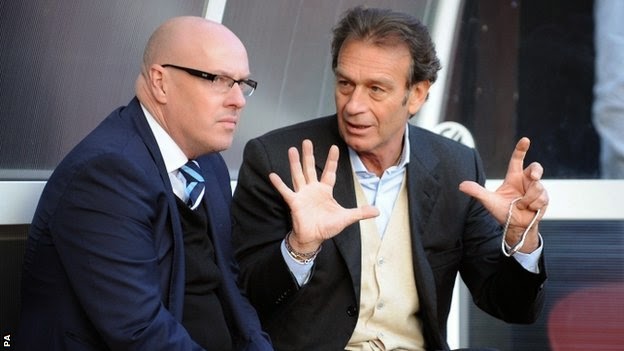 Within 9 minutes Watford had cruelly exposed Leeds wafer thin confidence and defence to take the lead. For the record Abdi headed home a cross from an Anyi cross after the simplest of balls over Wootton found the Watford flyer in acres of space who found his team mate unchallenged in the box. Simples. 1.0 Watford. "here we go again" HC muttered as I shook my head in frustration. Leeds did try to play possession football but with no creative pass or incisive run at the end of it. The ball went from one side of the field to another and then back to Butland who would play it long. Repeat, repeat, repeat..................

Ross Mac hit a speculative shot from 45 yards on the half hour mark which the goalie easily dealt with as Leeds looked like a team devoid of ideas, confidence and passion. In short we looked pathetic. Anya added to our woes shortly afterwards when yet more powder puff defending allowed another cross and another header to fly into the Leeds net. 2.0 Watford and even at this early time the game was over. The game drifted to half time with Leeds in a permanent state of chaotic, disorganised dross. They tried to play out from the back but nobody either wanted the ball or could control the ball when given it. It was like watching somebody trying to attack an Elephant with a toothpick. The visiting fans were reduced to ironic cheers when we did try a shot even though it went high and wide. The early songs about Cellino had now given way to "You don't deserve a wage" aimed at the rabble in white on the pitch. HT 2.0 Watford.

The half time debate around me was a relatively calm discussion debating if this was the worst team ever wearing the Leeds colours. Resigned nods of the head by everyone put a quick end to that topic before we anxiously checked how the teams below us were doing. "We won't go down" one fan asserted but nobody heard him they were all checking the Millwall, Barnsley, Brum, Blackpool and Charlton scores. Jokes about Hunt scoring a hat trick and Leeds winning tried to lift the gloom but we decided it would be more likely to find the Malaysian plane with Lord Lucan at the controls and Shergar in the hold.

Stewart replaced Mowatt at HT but the inept and frankly embarrassing Leeds play continued. Ross Mac had been playing some sort of deep lying midfield role in the first half but he returned up front which is where you'd expect the league's leading scorer to play? Hunt continued to run around a lot. Wootton continued to look as if he'd lost all interest in the game, Lees tried hard but seemed to make more mistakes. Warnock shone in the gloom whilst Poleon showed why BM has been reluctant to pick him. Brown clattered a few Watford players and the ref gave some daft decisions. Deeney got a third goal and would have added a fourth but for a fantastic save from Butland as Leeds disintegrated. It finished 3.0 but I was already pulling out of the car park ready for the long trek home. A shocking, inept and abject performance from Leeds that plumbed new depths of awfulness............something I thought would be impossible after some of the woeful showings this season. The fans deserve better and the club deserve better. Cellino has a massive task in front of him. If he didn't know that before the game he certainly did after it.

8 points clear of Millwall in the final relegation place with 5 games to play, three of them against teams below us. I'm afraid it's time for the bum to squeak. Blackpool on Saturday is the first chance to allay any fears of the dreaded drop. If we play like we did against Watford we will have no chance..........and that's coming from the ultimate optimist! Brian McD has lost the plot and it must surely be only a matter of time before he gets the chop. It's the dawn of a new era though so hopefully Cellino will be good to his word and we'll be back in the Premier League within two years! *Crosses fingers and whistles Always look on the bright side of life*

Posted by Andrew Butterwick at 20:02