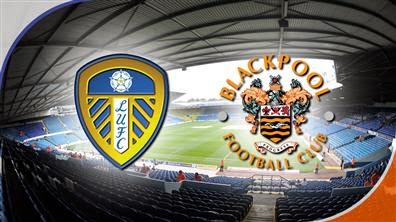 Blackpool arrived in LS11 with a worse recent record than their struggling hosts.........a fact most Leeds fans find impossible to believe. I mean how can any team be worse than the abject imposters of Leeds United players we have seen over the last six weeks? The Donkey Lashers have won only 2 of their last 25 games and have failed to win any of their last 14 away games as they have slowly sunk into the smelly quicksand of the relegation quagmire. Leeds have tried really hard to keep up with that standard of ineptness as they have only a lucky win over Millwall in their last 12 games to shout about. "Today's match should be a classic then" I suggested to the Happy Chocker as we boarded the train at Selby station. He just chuckled and rolled his eyes. As has become the norm we had more than enough off the field antics to debate and dissect as the train trundled along into Leeds. Haigh's resignation, Cellino's night out with the fans in the Peacock, a million fan friendly quotes from the mad Italian and of course the incredible saga of the spy cameras in the boardroom and even the toilets. Urinal Philosophers beware! Just another week on Planet Leeds then?

We heard the team announcement in the members bar. A back 5 including Zaluikas with Wootton at wing back. Tonge, Brown and Murphy formed the midfield three with Ross Mac and Smith up front. It felt weird discussing the paucity of right back cover whilst watching Forest loanee Peltier on the big screen. Ah well. The minute's silence in remembrance of the 96 fans who went to a match and never came home was impeccably observed. I am sure I wasn't the only fan thinking "there for the grace of god go I" thinking of games attended with similar crowd congestion on the old terraces.

Leeds started the game on the front foot for a change and within two minutes Pearce put a half chance high and wide. Leeds were playing with a bit more purpose than of late against a hesitant and nervous Blackpool side. It wasn't difficult to see why they were in such poor form. The recalled Murphy looked eager and created a good chance for him self as he ran intelligently onto a pass from Ross Mac only to be denied by a last ditch Blackpool tackle in the box. After the dross we've had to put up with recently this was almost liquid football..............almost! Blackpool didn't show too much of a threat going forward with Butland only having a soft Goodwillie shot to deal with in the first twenty minutes. 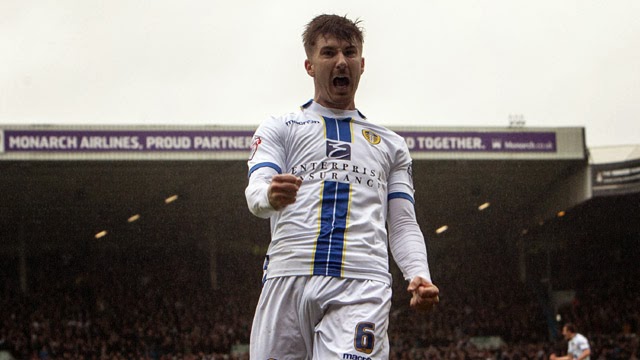 Leeds were looking comfortable and converted their early pressure into a goal on 22 minutes. Smith rose and flicked on a long ball forward to Ross Mac who had drifted off his man on the edge of the box. The Leeds captain calmly picked out Murphy steaming into the box at pace.......Murphy's first touch forced him to pull the ball back instead of shooting before slipping the ball between Gilks and a Blackpool defender into the net. The cheers rung around Elland Road like a volcano of relief. We were 1.0 up in a game we really needed to win to avoid an unseemly end of season relegation fight. The goal fired up the crowd who in turn fired up the team. Minutes later Ross Mac ghosted into the box only to see his header drift wide from a superb Wootton cross after more good work by Murphy. Blackpool then had a mini revival as first Bishop missed a glorious headed chance before Goodwillie went near with two shots. "We need another goal" I muttered to HC.

The game headed for half time with Leeds still trying to take advantage of a poor Blackpool side. Murphy was bundled to the floor on the edge of the box after another surging run. Free kick. Tonge stepped up and rattled a shot that Gilks only just held onto in the Blackpool goal. HT 1.0 Leeds and the home fans gave the team a decent ovation as they trooped off for their cup of tea. The Urinal Philosophers were shocked. "unbelievable we've still got a clean sheet and we're one up" one cheery fan announced. "We'll be getting a nose bleed if we keep this up" another one shouted.

Leeds might have felt pleased with their first half performance but they got an early reminder of how precarious a single goal lead is as Bashem slid a shot just wide of Butland's post from six yard out after just 90 seconds of the second period. Leeds hit back with a good chance of their own as Ross Mac controlled the ball in the box and laid an inviting ball into the path of Warnock who's shot ballooned wide. The game became increasingly scrappy as Blackpool looked for a life saving equaliser. Hunt replaced Smith on the hour to be greeted by boo's as he entered the fray. He might not be the best player in the world but booing him before he's touched the ball is just crass. 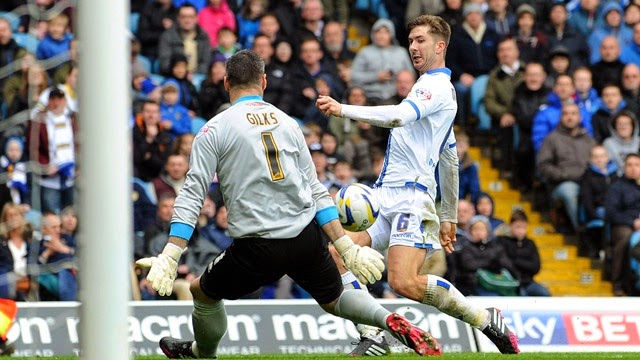 The boo boys were soon feeling a tad guilty though as Hunt rose to flick a delightful ball into the path of Murphy who beat the oncoming Gilks with a delicate finish to give Leeds a welcome two goal lead. Get innnnnnn! 2.0 Leeds. Minutes later Murphy turned provider as he set up Ross Mac with a delightful ball through the middle but Gilks thwarted the Leeds captain with a good save.

Aidey White replaced the injured Zaliukas with 15 minutes left. Blackpool put Leeds under pressure for the last 10 minutes without really looking like spoiling the home side's rare clean sheet. Even 5 minutes of added time couldn't spoil a much needed and welcome win for the struggling home side. Final score 2.0 Leeds. There was a mixture of relief and well relief as the fans streamed away from the ground. News that Barnsley had lost and Millwall had equalised late on meant we were in the rarefied atmosphere of 16th place a full ten points above the relegation places with just 4 games to go. Phew!

Murphy was the man of the match with a much improved performance from his last outings in a Leeds shirt. Zaliukas also looked assured at the back. Good as it was to win and keep a clean sheet most fans were conscious of the quality or lack of quality of the opposition. It was a battling performance though and after Tuesday's inept efforts I suppose we should be thankful for small mercy's? Barnsley away next week and a chance to not only lay the Oakwell hoodoo but also to virtually condemn our bottom of the table neighbours to relegation. That would be nice tha know's

Posted by Andrew Butterwick at 19:42