In recent years Leeds United have acquired more than their fair share of bogey teams such as Derby County, Millwall and of course Barnsley our noisy neighbours from South Yorkshire. No matter how poor Barnsley's form is or how low they are in the table a visit from the mighty whites to Oakwell is seen as a guaranteed three points by the followers of the Reds. It's like a hated Uncle visiting distant cousins and giving them a wedge of money to buy the week's shopping as payment for some mysterious family misdemeanour's way back in the mists of time. As a consequence the distant cousins always looked forward to the visit much more than Xmas even though they detested the said Uncle.

Today was the day Uncle Leeds paid their annual visit to Cousin Barnsley and as usual the Happy Chocker was dreading it. After all he has to put up with lot's of his Barnsley cousins day in day out at work. As usual Barnsley were in the middle of a desperate struggle against relegation but a battling win against fellow strugglers, Charlton, had given them extra confidence in front of the Easter showdown with Leeds. Would Barnsley resurrect their championship survival hopes or would Leeds bury the Barnsley hoodoo once and for all? We were about to find out.

After pre match drinks behind enemy lines in the Barnsley Snooker club HC, the Quiet One and yours truly joined the 4,000 nervous but noisy Leeds fans in the away end. Memories of the 11 goals we've shipped on the last 3 visits to Oakwell weighed heavy on my mind as we digested Brian McD's latest team sheet. Rudy Austin replaced Stewart on the bench in an otherwise unchanged team. The game started in bright sunshine with the hosts knowing that with games against Boro, QPR and Derby to come this was their best chance of 3 points to haul them away from the relegation trapdoor. 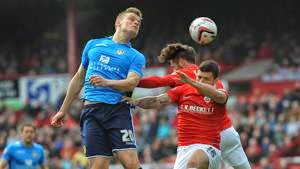 Leeds started brightly but it was Barnsley who had the first strike on goal when Jennings mistook the back row of the Barnsley kop for the goal as he sent the ball high wide and handsome. The first of many chants of "that's why you're going darn" rang out from the taunting Leeds fans. In previous visits to Oakwell Leeds have succumbed to a much more creative home midfield. Last year the blond haired Perkins was Leeds tormentor but this year the lack of quality in the red's engine room was thankfully there for everyone to see. Leeds first chance came when the hard working Smith planted a header towards the top corner but the alert Steele in the Barnsley goal was equal to it. Minutes later Murphy so nearly added to his two goals from last week when Ross Mac picked him out 10 yards out but his fierce header hit a defender with Steele struggling. 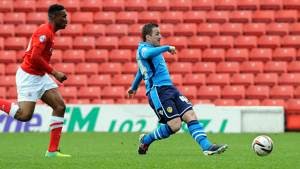 A combination of some early Leeds pressure and a hesitant Barnsley side started to give me a glimmer of hope that this just might be the day we actually do well at Oakwell. On 16 minutes the feeling got much, much better. A dangerous ball into the Barnsley box saw Smith out jump his marker and flick the ball in the general direction of Ross Mac who's first touch completely bamboozled the Reds defender freeing him to blast home his 29th goal of a very productive season. The away support roared as if we'd just scored the winning goal in a cup final. Some people would argue we just had. 1.0 Leeds.

Barnsley responded to the goal with a lot of bluster but very little skill. This was turning into a game that was right up Michael Brown's street as the wild tackles started to fly in from both sides. Etuhu was booked for the home side closely followed by Brown as the match struggled to get out of second gear with the referee's whistle working overtime. Barnsley had another couple of shots blazed into the kop as the match reached half time with the sides still separated by the sublime McCormack strike. News that Millwall were winning 2.0 at Boro didn't lighten the mood amongst the home fans.

The 2nd half started with the home fans trying to rouse their team by singing the theme from the Great Escape which to me seemed a bit bizarre given that the Great Escape was a heroic failure and not actually an escape? Still if it keeps them happy? The home team responded to the encouragement though as Leeds seemed content to sit back and let Barnsley come onto them. Not a tactic that did my heart any good or the lady who was stood next to me who was urging Leeds to "close them bloody down" and "gerrout" every time Barnsley attacked. Brian McD changed things on the hour as Hunt replaced Zaliukas as Leeds went to a flat back four. This stemmed the Barnsley flow as Leeds regained some control of the game. Smith stole in at the back post but his downward header was saved by Steele. Minutes later Ross Mac sent a searing volley over the bar to check the potential Barnsley comeback. Butland was hardly troubled in the Leeds goal other than making a couple of decent punches from dangerous crosses. Brian McD stood impassive in the technical area as Leeds loosened the relegation trapdoor for Barnsley. "Wear your track suit every week" chanted the knowledgeable Leeds fans as they sussed the real reason for Leeds sudden up turn in fortunes. The expected late charge from Barnsley never materialised as Leeds toyed with their South Yorkshire cousins. "It's just like watching Brazil" mocked the away fans as the disgruntled home fans headed for the exits knowing full well that League One football was almost certain after this defeat. Full time 1.0 Leeds and the Barnsley hoodoo well and truly buried.

This was a hard earned battling victory against a team short on quality and confidence but the 2nd win on the bounce together with a 2nd clean sheet sent the majority of Leeds fans home happy. Warnock was my man of the match with good performances from Murphy and Pearce. Ross Mac once again showed he has the class to play at a higher level as he heads for 30 goals in a season. The Happy Chocker couldn't stop texting and tweeting on the way home just to remind his many Barnsley supporting colleagues what the score was. Delicious! It might have been a game very short on quality but a win is a win and given the location this one was as sweet as it gets.

Forest head to Elland Road on Monday for another Televised clash. Can we keep another clean sheet or will it be another goal fest against the tricky Trees?

MOT.
Posted by Andrew Butterwick at 19:51