Jack Frost was alive and well as the Happy Chocker, Quiet One and yours truly gunned the car southwards for our last away day of 2014 at high flying Derby County. 2014 has been yet another "difficult" year of travels for the followers of the mighty whites where success has been as rare as a Pork Pie at a Bar Mitzvah. After our woeful showing against Wigan on Boxing Day we were conditioning ourselves for the worst. "I'd settle for winning a corner" was as much as I could rustle up in the optimistic stakes whilst HC was fearing a double figures defeat! It's fair to say that watching Leeds United this year has been difficult.

Redfearn made two changes to the side that capitulated against Wigan with Doukara replacing Sharp and Austin coming in for Tonge. Adryan returned to the bench. Despite the lack of any real hope of any points from the game that didn't prevent the travelling army of Leeds fans from turning the atmosphere up to white hot as the game got under way.

Leeds needed to get through the first 20 minutes unscathed if they were to make a game of it and that they did without too many problems. Warnock limped off after 5 minutes to be replaced by Beradi but Leeds were giving almost as good as they were getting from a Derby side looking to cement 2nd spot in the Championship as they enter 2015. Doukara, Bianchi and Antenucci all managed attempts on goal in the first half hour but none troubled the home keeper whilst at the other end Hughes, Christie, Martin and Ibe all had attempts blocked or deflected wide. Maybe we could get something out of the game after all?

The noise in the stadium was incessant fired by some juicy tackles and fouls from both sides as each team looked for that all important first goal as the game headed for half time. Ibe had tested the Leeds right flank a number of times without much joy but on 40 minutes he released Hughes who drifted behind the Leeds backline and drove into the box before dragging a teasing ball back into the Leeds six yard area where Mowatt bundled the ball into his own net for another Leeds own goal. 1.0 Derby and their fans erupted in tune with their goal music. Here we go again!

The goal shattered Leeds' porcelain like confidence and within a flash we went from a battling team to a disorganised rabble. Silvestri pulled off two superb saves in the remaining 5 minutes of the half as the Leeds resistance crumbled like the finest All Butter mince pie you can buy. Somehow Leeds got to half time with the score 1.0 but all the signs were there of another Leeds capitulation. The half time break didn't give Leeds any respite as they immediately hit their well worn self destruct button within a minute of the restart. 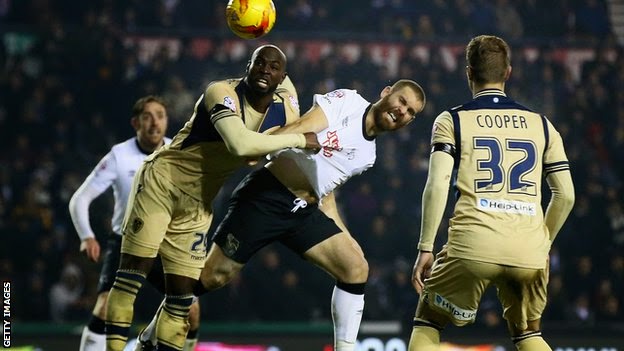 Bianchi followed Ibe into the corner of the pitch before committing a stupid foul. From the resultant free kick Buxton danced around the penalty box until he lost his marker and then planted a firm header past the helpless Silvestri. 2.0 Derby and all of a sudden HC's double figure prediction started to look a distinct possibility. Derby now slipped into 3rd gear and completely closed the game out with a full 42 minutes of the half remaining. Mistakes and poor decision making by the away side merged into one to help Derby gain a stranglehold on the game that they never relinquished. Their simple but extremely effective pass and move game bamboozled the Leeds team as they fell apart at the seams. The only surprise to me was that Derby didn't add to their 2 goals as they wasted a procession of chances simply fashioned by waltzing through the feeble Leeds resistance time and time again. Derby fully deserved their victory and they didn't even break sweat.

It became too embarrassing to watch but the majority of the travelling fans stayed to the bitter end. There have been worse Leeds performances in recent years but I can't remember many that have left me with such a paucity of hope for the future. We are definitely in 100% relegation form and the lack of fight and battling from the team doesn't auger well for any hopes that the New Year will bring anything other than an unseemly scrap before dropping once again into the third tier of English football. The team lacks the necessary quality to create decent chances in this league. Add to that an impotent strike force and a defence as brittle your average egg shell then things are looking terminal for Mr Redfearn's charges.

At least the "Magic" of the cup will briefly divert attention away from our League troubles with the visit to Sunderland on Sunday lunchtime. After that I'm not sure where we go from there? Answers on a post card please to Thorp Arch c/o Mr Cellino. Finally Happy New Year to you all and make the most of the New Year's Eve's celebrations as I suspect the drug that is Leeds United is going to do a lot of harm in 2015. Anybody for cold Turkey? Roll on Sunday!

Posted by Andrew Butterwick at 00:48

Thanks Andrew for all the 20140 post match commentary for those unable to make it. Cringing reading at the moment but MOT for 2015.

Anon,
Thanks for the comment. Hopefully I will be in Cup shock mode tomorrow!
MOT