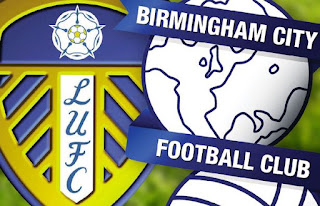 After last week's shambolic show of defending at the Riverside it was not surprising that there was an air of apprehension amongst the hordes of mighty whites fans heading for Elland Road. Even though the visitors Birmingham had a strike force led by Clayton Donaldson nerves were taut as a drum. Still surely sloppy Guiseppe Bellusci wouldn't be starting would he? The Happy Chocker comforted me with a careless throw away comment "does Nikola Zigic still play for them" and instantly a rush of dark thoughts from my bulging archives of Leeds United horror shows came flooding back. I swiftly ordered another pint to numb my pre match fears as we discussed what changes Rosler might make to the team. Will Buckley start? Will Botaka keep his starting place? Has Wood shaken off his mysterious injury? Will sense return and Byram return to right back? As ever on Planet Leeds there wasn't a lack of hot topics to debate as we prepared for kick off.

In the event Rosler did give Buckley his debut and brought back Murphy, Wood and Cooper into the team that capitulated at Boro. Still no place for Byram. The game kicked off with Birmingham first into their stride on a pitch that had recovered well after last week's mauling by the Rugger buggers. Birmingham's speedy winger Gray had the first shot of the game as he danced into the box and fired wide of Silvestri's post. Birmingham's tactics soon became clear as they were more than happy sit deep and let Leeds have possession waiting to pounce on the counter attack. This allowed the home side lots of ball bit little if any penetration. Liam Cooper received a yellow card on twenty minutes for a perfectly good tackle on Cotterill who then hit the free kick into the wall. The only reward for oodles of possession in the opening half hour was a weak shot from Berardi that Brum's goalie Kuzczak easily fielded. This was not the tub thumping passionate performance Leeds fans yearn for at home. 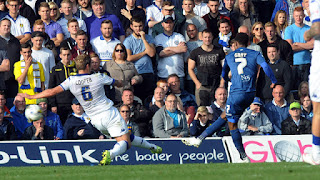 Just after the half hour yet more disaster came Leeds way. The mighty Clayton Donaldson chased a through ball into the Leeds box where he clattered into Cooper and ricocheted the ball free to the right of the box. While the Leeds players appealed for a foul on Cooper Gray recovered the ball and hammered it into the net past Silvestri for the opening goal. 1.0 Birmingham. It did look like a foul on Cooper but once again the Leeds defence were made to look like an easy touch. Unfortunately that's because at this moment in time they are.

The response from Leeds to the goal was pretty much the same slow build up and patient probing of the resolute Birmingham defence that had yielded very little in the first half hour. Birmingham looked dangerous on the break though and both Gray and Cotterill tested Silvestri in the Leeds goal before half time. Dallas did have a golden chance to equalise just before half time but he was denied by a fine save from the visiting goalie. Birmingham led at the break as the storm clouds gathered above the once mighty fortress that is Elland Road. The urinal philosophers were in unforgiving mood during the half time gents debate. "This is the first and last match watching that shite for me" "Absolutely f****** clueless" and "we're too bastard nice.....why don't we win any 2nd balls?" were a small selection of the vociferous opinions from the justifiably frustrated Leeds fans.

I'd like to report that Rosler's team talk and changes swung the game Leeds way in the 2nd half. I'd like to report that in the second half Leeds lifted the tempo and had a real go but they didn't. They continued with the slow and patient build up that suited the Brummie defence down to the ground. The home crowd become more disillusioned and frustrated as the game ebbed away from Leeds with little resistance from the men in white. Bamba did go close with a header from a corner but the total lack of any inventive or creative play from Leeds was painful to watch at best. On the hour Rosler withdrew Buckley and sent on Botaka. Buckley had been virtually anonymous in his first game for Leeds and struggled to make any impression at all. The same cannot be said for Mr Botaka. He immediately caught the eye as he dazzled the Birmingham defence with a series of exquisite moves, flicks and tricks that will keep Soccer AM's showboat section going for weeks to come. He even had the sense to take on his defender and beat him. Outrageous!

Botaka's appearance lifted the home crowd and Leeds so nearly benefited straight away as Cook thundered a loose ball back at the Brum goal only to see Kuzczak turn his shot behind for a corner. Inspired by Botaka Leeds gained 4 corners in quick succession but couldn't make anything of them as the clock ticked towards 90 minutes. Antenucci and Byram were off the bench as the home side belatedly tried to snatch an equaliser but with everyone pushing forward the Leeds back door was left wide open and on 90 minutes Maghoma waltzed through the Leeds defence unchallenged and sealed the game with a 2nd Birmingham goal. 2.0 Birmingham.

The stands emptied immediately as the long suffering Leeds fans added another horrible and at times gutless performance to their Leeds United memory bank. Those who left missed Botaka create two more chances for himself but his shots were blocked and saved. Full time 2.0 to Birmingham.

This was as bad as I have seen for a long time and that's saying something. There was no bite or passion in midfield. There was absolutely no creativity until Botaka appeared in fact it seemed that Berardi and Bamba were the playmakers. Rosler said he'd done his homework on this Birmingham side well if he had I'm afraid he got "0 out of 10 must do better" from me and plenty of other fans. The defence seems to have gone from stingy in the first few games to the most generous back four in the league. We're just too fucking nice. We win very few 50/50 balls and allow ourselves to be bullied off the ball. Rosler's patient build up tactics lack someone who can unlock any defence that sits back and waits for them. 10 games gone and only 11 points that's even worse than last year with Wackaday in charge. Overall view of the season so far. Not bloody good enough by a long way.

The league leaders Brighton are next up at Elland Road after the international break. Two weeks is a hell of a long time on Planet Leeds. God only knows what will happen when the Seagulls fly into town!

MOT
Posted by Andrew Butterwick at 19:02

Thanks Andrew, Honest as always win lose or draw. To be honest we seem to have our best group of players in a long time but the 451/433 system is not working especially at home.
To play 442 would mean dropping a central midfielder,Mowatt who has struggled this season should be the one to lose out.
I know we as fans all have our favourites but I can't see a place in the starting 11 Berardi is just a better defender.
When we lose i generally avoid Twitter as some of our fans can lose the plot in a big way, having said that I did see in a tweet "that Rosler is on thin ice" I would say there's a great bloody crack in it !!
MOT.

Tony,
thanks for the comments you make some good points. I think Byram is a much netter defender than Berardi but then football is all about opinions and I respect yours. As you say the system isn't working so it will be interesting to see how the ice skater tackles that........assuming he's given chance?
MOT