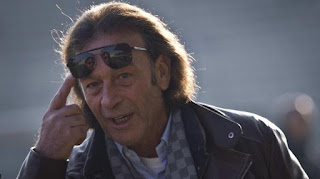 I've lost count of the number of times I've said things can't get any worse on Planet Leeds but credit to the mad Italian he keeps coming up with new ways of showing that they can and sadly do. This week his ranting about the chaos that moving kick off times and dates to suit TV schedules causes was spot on and had 99% of Leeds fans nodding in agreement but then he had to blast both his feet off with an AK47 by putting a cap on the number away tickets we will sell in some bizarre attempt to hurt the Football League. I know his Italian's brain works in mysterious ways but surely he can see the only ones he has pissed off with this stance are the fiercely loyal Leeds fans.  FFS the only current shining light with being a Leeds fan are the away days.

It was not just the 2000 ticket cap that raised weary eyebrows this week. Cellino had two more court cases in Italy to deal with whilst our Head Coach was proudly announcing his target for the season is to maintain the lofty heights of mid table frustration for his young team. I suppose he's trying to work to an "under promise and over deliver" strategy but whilst the majority of fans would agree that on current form Leeds would be lucky to stay in mid table you would hope that there would be some sort of plan to lift us up the table and not down from the coach of the team?

With all the off the field chaos the pre match mood along Elland Road was rebellious to say the least as the Happy Chocker, Quiet One and yours truly headed for our usual seats. Just what you need when playing the team at the top of the league. Rosler had made three changes since our last outing against Birmingham with Botaka, Adeyemi and Wootton coming in for Buckley, Murphy and the sick Taylor as he reverted to the 4-3-3/4-5-1 system. Wootton is now in front of Byram in the right back pecking order a fact that amazed most of the gathering throng of battle weary Leeds fans inside Elland Road.

Leeds did start brightly and within 5 minutes the busy Cook troubled the Seagulls defence with a tricky run and then shot. Maybe this wasn't going to be too painful after all? Soon the home crowd were on their feet as Cook slid a lovely ball through for Wood who's shot was well saved by Stockdale in the Brighton goal. The linesman's flag was fluttering for offside but for a team at the top of the league their defence was looking a little shaky. In midweek Rosler had voiced his frustration at the way Leeds had conceded too many goals on the break but on 11 minutes the same old failings struck again as Solly March capitalised on a lost ball by Adeyemi in midfield as he coolly turned Wootton inside out and slotted the ball past Silvestri for the first goal. 1.0 Brighton and a collective sigh of deja vu spread around Elland Road. 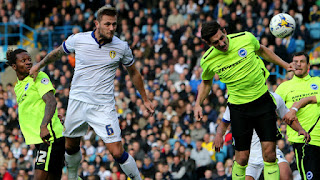 Leeds did bounce straight back though as Dallas pinged a teasing ball into the box where Wood was inches from poking home the equaliser. Leeds continued to probe the hesitant Seagulls defence prompted by Cook as hopes began to rise amongst the crowd of a Leeds equaliser. They didn't have to wait long. On 23 minutes Wood was fouled on the right hand edge of the box. Cook, Mowatt and Botaka stood over the ball for a well rehearsed routine before Mowatt swung in a perfect cross for Cooper to glance his header past the helpless Stockdale to bring the scores level. Lovely. 1.1.

Brighton still looked dangerous on the break though with the elegant Solly March causing the Leeds defence trouble each time he got on the ball but it was Dale Stephens who tested Silvestri next with a low shot that the Italian thankfully held onto. Leeds were having the better of the game though and when they got another free kick in virtually the same position Wood should have done a lot better with his header from a carbon copy Mowatt cross. Leeds finished the half strongly and went into the break with confidence high and the scores level at 1.1.

The urinal philosophers were mildly happy with the first 45 minutes. "That's a lot better" was a common phrase coming from the fans gathered for the communal half time relief. Could they carry it on the second half though?

Leeds fan Stockdale gave the kop the Leeds salute as he took his place for the 2nd half as Leeds continued to push for that all important next goal. Wood hooked a bouncing ball over the bar from 3 yards out before Mowatt charged down a Stockdale clearance on 55 minutes only to see the ball bounce off the post and behind for a goal kick. The game was anybody's as first Brighton and then Leeds struggled to gain that all important advantage but as the game went on the momentum began to swing to the Seagulls a fact emphasised as March jinked inside Berardi and smashed a shot against the bar.

Antenucci replaced the disappointing Mowatt quickly followed by Buckley for Dallas as Rosler looked for the key to unlock the Brighton defence. Botaka was having some joy on that front with a series of lovely touches and runs culminating in a teasing cross that Brighton managed to scramble clear. His match came to an end on 77 minutes as he was subbed for Sam Byram. A strange decision given that he had given Brighton the most trouble? Brighton brought on their veteran striker Bobby Zamora.  The match headed into a tense final 10 minutes with 3 points tantalisingly there for either side to snatch. Then on 85 minutes disaster struck Leeds as Cooper crumpled in a heap on the grass clutching his knee. With all three subs used Leeds were now down to ten men and with Wootton now playing at centre back. Mmmm this could be interesting.

And interesting it was as Brighton capitalised on sloppy marking on 88 minutes as Bong released Zamora who scored with his first touch of the ball as he delicately lifted the ball over the oncoming Silvestri to give the Seagulls a 2.1 lead. Gutted doesn't begin to describe the feeling I and the majority of the 22,000 crowd were feeling. There wasn't enough time left for Leeds to recover as Brighton consigned Leeds to yet another home defeat all be it one they hardly deserved.

Football can be a cruel game at times and this was definitely one of them I mused as I marched back to the car. We had played a lot better and Cooper had been superb along with Cook but when you're down lady luck tends not to shine on you. If Cook and Cooper were the plus points Adeyemi and Mowatt were the minus points. Adeyemi just gives far too many balls away for a ball winning midfielder. His half hearted tackle that led to their first goal was typical of his contribution to the game. Mowatt seems to be struggling in his midfield role at this moment in time. All in all this was a much better performance and gave a slight glimmer of hope in these gloomy times on Planet Leeds.

Fulham up next on Wednesday night. Another tough one for Leeds and with Cooper likely to be missing we will probably have the delights of Mr Bellusci back in the defence.  Mmmmm I think I need a large beer! Still roll on Wednesday.


Posted by Andrew Butterwick at 23:10