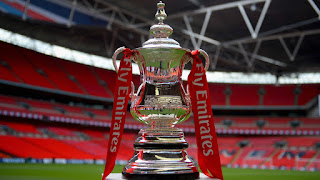 4th Round FA Cup day saw the Happy Chocker, Quiet One and yours truly joining the 6,800 White army heading across the Pennines to invade Bolton. The FA Cup may have lost a lot of it's appeal in recent years but the long suffering Leeds fans don't need much of an excuse to form an invasion force especially when there's a good chance of progressing to the next round at the expense of a team from the Red Rose county. Of course part of the "attraction" of following Leeds United is that you never really know what sort of performance you are going to witness even against teams that are struggling. It's what I like to call the consistent inconsistency that Leeds seem to be so good at in recent years.

After driving through sleet, snow and rain we arrived at a windy and wet Macron Stadium where the temperature had dropped to triple Baltic just in time for kick off. Bamba replaced the injured Cooper whilst new signing Diagouraga displaced Murphy in midfield. Antenucci started up top in place of Wood in a 4-2-3-1 formation with Cook playing in an advanced midfield position. Doukara started on the left with Dallas on the right. Leeds started with some real purpose. Neat little triangles of passes between yellow shirts lifted the spirits of the massive away support around the ground. But it was Bolton who had the first shot on goal as Pratley ballooned his attempt high into the massed ranks of Leeds fans behind Silvestri's goal. Leeds were soon up the other end as Cook curled a shot that Amos gathered easily in the Bolton goal. 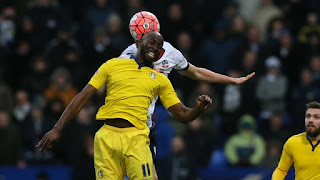 On 8 minutes Leeds' bright start suddenly got a lot better. Bamba intercepted a ball on the half way and slid the ball to Dallas. The Northern Ireland man ran at the retreating Bolton defence before putting a slide rule pass through to Doukara who took one neat touch before shooting left footed through Amos and into the net for the opening goal. Wild celebrations in the away end partly due to the goal and partly to warm up many frozen toes. 1.0 Leeds and strains of optimistic Wemberlee chants rung around the Macron Stadium.

Madine nearly equalised minutes later but he hooked his shot over the bar from inside the 6 yard box. Leeds kept their early momentum going as chances started to flow for the visitors. The irrepressible Lewis Cook swapped passes with Doukara on the half way before streaking away towards the Bolton area.........he calmly looked up and picked out Antenucci on the far side of the box but Amos saved smartly at his left hand post as Leeds threatened to over run the Trotters. More flowing moves and more possession for Leeds helped Steve Evans men dominate the game much to the delight of the freezing 6,800 visiting fans. On 39 minutes Leeds swept down the right flank with Bolton in retreat.........Antenucci drove into the box and pulled the perfect ball back to the edge of box where Diagouraga purred into the 18 yard area and caressed the ball home for the 2nd Leeds goal. 2.0 Leeds. The temperature might have been freezing but Leeds were on fire as the ecstatic away fans belted out more meaningful chants of Wemberlee! Delicious.

Half time 2.0 Leeds. The pairing of Diagouraga and Bridcutt was awesome in midfield allowing Cook to play his more natural game in front of the two dark destroyers. Doukara looked a different player in the wide role as did Antenucci ploughing an impressive lone furrow up front. Half Time was Happy Time for the Leeds fans for once. "Just need to kill them off in the 2nd half now" I suggested to HC. "That'll mean playing well for two consecutive halves though" he pointed out.......something we'd failed to do all season. 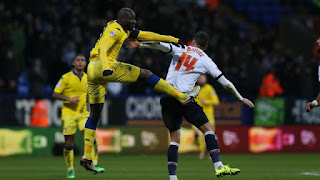 Bolton started the 2nd half strongly as the sleet and rain fell from the sky. Feeney and the pacy Wellington were having some joy down the flanks as Leeds battled to keep their two goal margin. The Leeds defence withstood the early pressure though and when they once again counter attacked quickly down the left flank the game should have been dead and buried. Taylor swung a deep cross to Dallas on the corner of the box who laid it into the path of the advancing Wootton......goallllllllllllllllllllllllllllll err not quite as the full back's shot skimmed the bar from 12 yards. Bollox!

After the early 2nd half pressure from Bolton Leeds recovered their composure and started to pick Bolton off on the counter. Doukara was callously hauled down 25 yards out giving Bellusci a chance from the free kick. His swirling effort forced Amos to tip it over for a corner. Then with just 10 minutes to go Leeds started to feel for their well worn self destruct button. First a poor headed clearance from a cross landed at Pratley's feet in the box and only a super human block from Bellusci prevented the Trotters from pulling one back. From the resulting corner they weren't so fortunate. Slack marking allowed Pratley to fire home from 6 yards. 2.1 and game on. Bolton's tails were now up as they sniffed a chance of an unlikely draw. The nervous Leeds defence was creaking loudly. With just two minutes left it was Pratley again causing havoc in the Leeds back line as he jinked inside and curled a shot goalwards where Silvestri could only parry the ball. For what seemed an eternity the ball bobbled in front of the goal inviting Bolton to score but thankfully it fell to Gary Madine who found the side netting via the post.

That was Bolton's last chance as the ref brought a decent game to an end with Leeds worthy winners. Doukara was my man of the match closely followed by the peerless Lewis Cook. Steve Evans led the applause to the freezing fans who had travelled across the hill with his now familiar fist pumping routine. So Leeds are through to the 5th round and dreaming of further progress in this famous old competition. We had plenty of time to contemplate who we wanted in the next round as we waited a millennium to get out of the car park. It didn't matter though...........we were still on the road to Wembley and at least for the next couple weeks those dreams will be very real.

Posted by Andrew Butterwick at 22:37

Thanks Andrew. Nice to read a report where we are having more than one shot in target. MOT