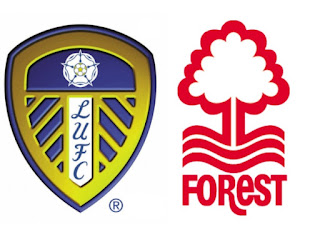 The fallout from yet another net negative spend transfer window rumbled on this week on Planet Leeds. Sad thing is after a decade of similar underwhelming "ventures" into the transfer market it all becomes a bit predictable. Lots of juicy targets are identified early on and with the declared backing of whoever the incumbent owner is at the time unrealistic hopes rise like a perfect Mary Berry Sponge only to be dashed by the harsh reality of Jim White's deadline day. Still there's always the emergency loan window to look forward to where clubs can fight over the leftover players who couldn't get a proper transfer. A bit like scrabbling around the "out of date goods" trolley in Aldi to pad out the weekly food shop!

We weren't going to let the sad plight of our once great club spoil another match day though.......we're sort of used to it now.......so for the 4 millionth time the Happy Chocker and Quiet One joined yours truly on the well worn trek to Elland Road for the clash with another club who have seen better times, Nottm Forest. Memories of Clough, Revie, the miners strike and heady European nights always surface for this clash to wash away the pain of mid table championship mediocrity that we now have to endure. The slate grey skies and icy rain didn't add anything to the matchday experience as we hurried down Elland Road to the sanctuary of The Old Peacock marquee for our pre match refreshments. 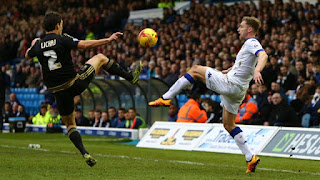 Not surprisingly Steve Evans' only change from the starting line up that did so well for 80 minutes at Bolton was the return of Cooper in place of the injured Bamba at centre back. With Wood still injured and a lack of new faces the only real selection debate was the possibility of Carayol starting rather than on the bench. Just over 24,000 were in the Theatre of Hope as the game got under way. Leeds teased their fans with an encouraging start culminating in a silky move down the right flank before Dallas hung a perfect cross for Doukara who climbed high at the back post but saw his header drop inches wide of the post. This fired the home fans up but the illusive Forest striker, Oliveira, soon put a dampener on the home side's early hopes as he found space with ease and fired two shots in on Silvestri in the Leeds goal.

Leeds were enjoying plenty of possession as Forest sat deep waiting to pick Leeds off on the counter a tactic that Leeds have floundered on more than once this season. While Bridcutt and Diagouraga were collecting plenty of ball in midfield there was precious little penetration of the massed ranks of Forest defenders. Leeds frustration at struggling to create chances wasn't matched by Forest. Jamie Ward rattled a shot in that Silvestri saved minutes before Gardner thundered a pile driver that hammered against Silvestri's bar with the keeper well beaten. Forest continued to apply the pressure and when Osborn's shot was blocked on 25 minutes and ballooned to Tesche just 8 yards out the Forest midfielder should have opened the scoring but thankfully his volley created havoc for the fans behind the goal and not the Leeds goalie.

As half time approached Leeds did recover some of their composure and forced three corners on the bounce but as ever with set pieces we flattered to deceive as all of them came to nothing. Forest finished the half on a high as Lichai and Oliveira both went near with late chances. HT 0.0. The urinal philosophers weren't that vociferous for a change although one punter grumbled "It's alright all this tippy tappy football but when is anyone going to have a f****** shot" He had a point.

Mr Grumpy didn't have long to wait for a shot in the 2nd half though. First Mr Wootton of all people somehow found himself in the Forest box with the ball at his feet but his shot went straight at the Forest keeper. Next Dallas turned his man beautifully on the edge of the box and curled a shot goalwards testing De Vries in the Nottingham goal. Leeds were building a slight head of steam and when Taylor struck a vicious shot just before the hour Leeds were at last looking like they wanted to break the deadlock. The thing with Leeds United is that just when you think it's safe to start thinking positively they usually kick you in the bollox..............and that's exactly what happened a minute after Taylor's promising strike. Forest counter attacked and as had become the norm won the seconds as the Leeds defence repelled the initial attack. A simple ball back into the box found Bellusci out of position leaving Oliveira time to head past Silvestri from 7 yards. 1.0 Forest and the 2,000 away fans were in heaven. Poor closing down initially, poor marking in the box and a less than auspicious attempt at a save from Silvestri. Forest 1.0 and a very long way back for Leeds.

Leeds were floundering and making no impression on the resolute Forest defence. A change was needed and on 70 minutes Carayol replaced the subdued Dallas and immediately made an impact. He actually pushed the ball past a defender and hit a dangerous cross into the box. Unbelievable! And here's me thinking they had been told not to try and beat a man. Carayol wasn't just satisfied in doing it once though he tried it again and again. Suddenly there was a hint of a threat to the Forest defence. Erwin joined the fray for the last 9 minutes as Leeds pushed for an unlikely equaliser but as they did they left themselves horribly exposed at the back. Bellusci decided he might as well attack and stayed up front. Time was running out for Leeds though. They needed to throw everything at Forest for the last two minutes of the game. Steve Evans was on the same page as most of the fans so when the substitution board was raised most fans thought this would be a bold last ditch attempt to snatch an equaliser............Wootton came off to be replaced by Adeyemi at right back??????????????????????? Bizarre. Guess what? The game ended 1.0 to Forest.

All in all a disappointing performance from Leeds. Another soft goal conceded and another game at Elland Road were we seemed to be devoid of ideas to break down a team that comes and sits deep. Until Carayol came on I don't think any Leeds player had attempted to dribble past an opponent. Cooper had a solid game at centre half and Bridcutt had a productive game in midfield but other than that this was an afternoon to forget for Leeds. The paucity of real quality in this team is there for all to see. Sad thing is it would only take a couple of quality signings to turn Leeds from a run of the mill mid table side into top six contenders.

Boro are up next at Elland Road. They are the experts at sitting deep and counter attacking at speed. Something tells me it could be a Monday night horror show for the remaining Leeds faithful? Never mind there's always the cup to look forward to.........

Posted by Andrew Butterwick at 23:21

Thanks for another great report, Pity another season of nothing special!! At least the sun is shinning in Spain.

Nice report again Andrew. Thnx for being the eyes and ears for those of us living outside the UK these days. You say it like it is. I someetimes feel I must be asleep watching Leeds as we keep making the same basic mistakes amd mever seem to learn from them.