The Valentine's Fair might have taken up root in the main car park at Elland Road but there wasn't much love towards The Mad Italian from the disillusioned Leeds fans heading for the clash with high flying Boro. The Anti-Cellino protesters had chosen a novel way to get their message across by projecting a continual loop of differing messages and quotes onto the side of the giant East Stand. It certainly looked impressive but tonight wasn't a night to stand around admiring the ingenuity of some disaffected Leeds fans. It was bloody cold and I had skipped tea to make the kick off so I was soon heading for the sanctuary of the NW Corner for a cup of Bovril and one of Massimo's pies..........Needs must!

Steve Evans had kept the same starting line up that so disappointed against Forest last time out so there was no place for Bamba or the returning Mowatt. Confidence wasn't high amongst the realists inside Elland Road after all Boro had splashed the cash to bring Rhodes on board to bolster their already impressive promotion push and they had the most miserly defence in the division. Not a good mix when we are struggling to find the net and keep giving away soft goals. Despite this I took my seat in the hope that tonight we might just upset the Smoggies as we have usually done in the recent past in West Yorkshire...........even if that did give the advantage to my Codhead supporting colleagues at work!

After last week's lack lustre showing Leeds soon showed there was going to be no repeat of the soporific tempo that they attempted to beat Forest with. This was "up and at em" tactics right from the off. Cook sprung Dallas with the first attack of the game but his shot was blocked as was Antenucci's minutes later before Doukara repeated his assist for Antenucci but again the Italian's shot was blocked. Boro were rattled by the up tempo Leeds approach. Boro are not pushing for automatic promotion for nothing and they quickly drew breath and threatened to take the lead as they attacked Leeds' left flank. Ramirez's low cross caused chaos in the Leeds defence..........Silvestri spilled the ball only for Bellusci to hook the ball clear for a corner. Boro then had the ball in the net as Rhodes headed home a cross that was ruled out of play before the ball was swung across. I must admit it looked OK to me but as the old football saying goes "look in tomorrow's newspaper to see if it was a goal" 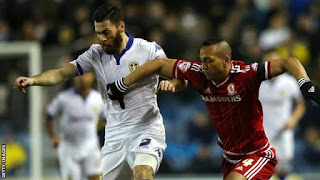 Boro's large away support sensed they were beginning to get on top as Stuani started to find space in the Leeds half. Rhodes seemed to be having a few meaningful off the ball debates with Bellusci which inevitably ended up each time with the ex Town star lying prostrate on the grass. Leeds seemed to have heeded the more physical approach that Boro applied at the Riverside in the fixture earlier this season and this time were giving as good as they got. Leeds were enjoying the majority of the possession  but still struggled with the final ball or touch. Doukara did drift the ball onto the roof of net with a chip soon after De Laet had rattled his own bar from a Leeds corner though. Half time approached with Cook  shining in a Leeds midfield that was more than a match for the high flying Teesiders. Half Time 0.0.

A decent first half from Leeds with Cook, Bellusci, Diagouraga and Bridcut all impressing in front of the Sky cameras. Could they continue in the 2nd half though? The 2nd half started similar to the first with Leeds playing a high tempo pressing game but it was the Smoggies who started to turn the screw on the eager home side. Silvestri dealt with a decent shot from Stuani as the pressure built. On 56 minutes the wider Football family came together to pay tribute to Radio Tees Football commentator Ali Brownlee who died tragically after a short illness recently. All 4 sides of the ground joined in with the Boro fans applause and mobile phone light tribute. Class. Once it was over the two sets of fans were at each others throats though! Funny old game isn't it?

The game was fast becoming one of "who dares wins" as both teams pushed for the winner. Stuani twice and then Ramirez went close for Boro before Konstantopolous produced a worldie save to deny a Doukara header at the other end. Mowatt had replaced Dallas and his introduction added some attacking purpose to the Leeds cause as the game entered the final twenty minutes. Surely a goal was coming but at which end? Rhodes wasted a golden chance when he he hit a shot straight at Silvestri whilst Mowatt tried wriggle through the resolute Boro defence at the other end. Erwin replaced Antenucci for the final push.

Rhodes missed a glorious headed chance only to be regaled with a tuneful "what a waste of money" rendition from the Leeds faithful. Doukara matched Rhodes miss when he strode through and hit his shot at the Greek Boro goalie as the game hurtled into a tense and exciting finish. Gibson picked up a 2nd yellow for an agricultural tackle on Erwin as he sprinted away from him. This encouraged Leeds to gather the troops for one final assault on the Boro goal. Doukara went close before Taylor drove inches over from the edge of the box with virtually the last kick of the match. It ended 0.0 with the home crowd more than happy with the performance and the result.

The bitterly cold weather couldn't prevent smiles on the faces of most Leeds fans as they streamed away from the stadium. A good showing against promotion candidates in a performance that bristled with tempo, desire and willingness to attack. Why can't we play like this every week.........oh and finish the odd chance as well! Cook was man of the match with good support from Bridcutt, Diagouraga, Bellusci and Cooper. Watford away is next on the agenda for Leeds. Just like Gabby Logan I've got a feeling about the cup and Leeds this year......................

MOT
Posted by Andrew Butterwick at 00:13