There was a bright blue sky with fluffy white clouds and Mr Sunshine beaming brightly on us as we headed east on the M62 for the derby with the troubled Hull Tigers. Resentment at controversial plans for next season's ticket arrangements, lack of faith with the manager and a significant section of fans unhappy with the owner are all familiar themes for Leeds United fans but today for once we were playing a team who seemed to have more problems than us...............and they're guaranteed a play off place as well! Should make for an interesting atmosphere at the KCOM Stadium.

For once there was an almost relaxed atmosphere amongst the travelling army heading for Hull. Our season ticket arrangements have been met positively if not with amazement in some quarters, 3 wins on the bounce and no lingering relegation worries together with a distinct end of season frivolity combined to give a party atmosphere in the away end in stark contrast to the tense and simmering fumes wafting across from our East Yorkshire cousins. Bridcut replaced Murphy and Dallas came in for Coyle on the right flank in an otherwise unchanged team. Bellusci wasn't even in the squad?

Hull hit Leeds hard in the opening ten minutes with wave after wave of attacks. Snodgrass and Maloney saw a lot of the ball on the flanks as Steve Bruce's men sort to undo Leeds out wide. Taylor and Berardi were standing firm though as the away side battled to keep their classy opponents at bay. Akpom and Huddlestone missed half chances as the atmosphere reached boiling point around the KCOM Stadium. As ever the Leeds travelling support were in good voice as Leeds drew breath and forced a corner themselves. Bamba popped up at the back post but could only guide the ball back across the box and away for a goal kick. Hull, with Huddlestone prompting from midfield, were having the Lion's share of the possession but on 15 minutes Leeds silenced three quarters of the stadium......well it wasn't that noisy in the first place!

Cook stripped Hull of the ball in the centre circle and glided a ball into Wood who cleverly spun and hit a first time ball into the path of Charlie Taylor who was steaming down the left........Taylor fired the perfect cross right into Wood's flight path and the big Leeds striker gobbled up the chance before the Hull defence could move. Get innnnnnnnnnnnnnnnnn! The away end exploded with joy. 1.0 Leeds. Hull responded immediately and had Leeds on the back foot defending as if their live's depended on it. You'd think it was Leeds in the play off places not Hull. Akpom, Maguire, Hernandez and Davis all went near but just when you thought Silvestri's goal was under threat a white shirt was there to block or deflect the chance away.

Hull were dominating possession as Leeds sat off them in a tight defensive formation. Huddlestone was getting too much freedom for my liking though as he strolled around pinging passes at will. As the game inched into first half added time Leeds resistance finally failed not once but twice in a minute. First Leeds lost the ball in midfield which left a gaping hole on the Leeds left flank. Snoddy exploited the space before laying back to Hernandez to side foot home the equaliser. Suddenly the home fans woke up and the stadium was alive. It was even more alive 60 seconds later as Huddlestone was given space to pick his spot from the edge of the box. Bollox! 2.1 Hull. Leeds trudged off at Half time shell shocked. Having held a good Hull side at bay for 45 minutes they conceded two confidence draining goals in added time.

The urinal philosophers didn't know what to make of the first half. "Lovely goal from Wood" one optimist chimed in whilst another had a slightly different view "Why does Bridcutt always give the f***** ball away" Steve Evans replaced Erwin with Botaka at half time presumably in an attempt to open up the miserly Hull defence?

Hull carried on their dominance of the game in the early part of the 2nd half but Leeds have found some steely resolve of late and when Cook prompted a quick counter attack Charlie Taylor once again caused havoc down the left flank with his jinking run which was finally ended with Obudajo scything down the flying full back in the box. PENALTY! The Hull fans in the stand behind the goal couldn't believe it. All the dominance and Leeds were about to pull level.........weren't they? Wood stepped up to take the spot kick and hit the ball to McGregor's left but the Hull goalie flung himself the right way to deny Wood his 2nd goal of the game.

Murphy replaced Diagouraga just before th hour as Evans tried to disrupt the dominant Hull midfield. Leeds were still battling hard but struggling to breakdown the resolute Hull defence. Hull seemed to be happy to sit back and pick Leeds off on the break but with just the one goal in it Leeds kept plugging away. On 70 minutes Livermore caught Berardi from behind and the Swiss international went down in agony. Livermore got booked for the tackle as Berardi was stretchered off. A minority of the Hull fans behind the goal showed their class as they pelted Berardi with missiles and chanted "wanker" at him as he was carried away. Thankfully the other Hull fans did show him some respect as they applauded him off. 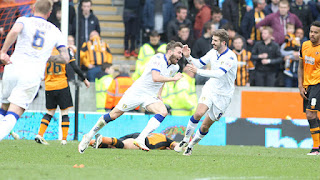 Botaka gradually got into the game with some nice touches and dribbles that gave Leeds some hope of retrieving the game. Hull still looked dangerous on attack though as the away fans kept up a continuous "All Love Leeds" chant to try and inspire the whites to an equaliser. Hull continued to defend deep as full time approached. Then Maguire fouled Dallas with 5 minutes to go. Dallas swung the free kick in onto Wood's head forcing a save from McGregor. The Leeds fans lifted the chant another notch.Leeds had had a sniff of blood though and back they came at the Tigers. Botaka picked the ball up on the right and went round two defenders as if they weren't there........shoot I screamed as he had one more jink but he ignored my advice and laid the ball back to Dallas who took one touch and then slotted the ball past McGregor for the equaliser. The roof flew off the stand behind the goal as the 2,300 travelling fans revelled in the late, late equaliser. Delicious!

There was still time for Hull to hit back as Cluclas twice and then Snodgrass had shots blocked by desperate Leeds defenders as the Tigers looked for a belated winner. It wasn't to be though as the game ended 2:2. What a game. Marching on Together thundered around the Hull stadium as the happy Leeds fans headed out of the ground mingling with the disgruntled home fans. Cooper, in his home town, and Bamba were immense at the back today. Botaka showed some lovely touches when he came on but my man of the match was Taylor who generally kept Snodgrass quiet, made the first goal and got the penalty that Wood missed.

It might have been just a point but it felt like a win. Leeds have hit some decent form at the end of the season. Today was a real battling performance against what are a better Hull side with some real Premier League class in their ranks. Just two games to go now............and just when I was starting to enjoy it! Bring on relegated Charlton for the final category A game of the season!


Posted by Andrew Butterwick at 20:15