There was a real "end of term" feeling around Elland Road for the last home game of the season against already relegated Charlton. Bizarrely this had been designated a category A game by the Lords and Masters at Leeds Utd but despite that there was a healthy number of fans making the trek to LS11 to see the curtain fall on another underwhelming campaign for the mighty whites. Would this be the last time Steve Evans leads Leeds out at Elland Road? Would any of the Cellino family take to social media with yet another embarrassingly crass post? Would Bellusci return from his training ground strop and get some game time? All questions we debated enthusiastically in the pre match lubrication period.

Evans made three changes from the Hull game with Coyle replacing the injured Berardi and Murphy and Botaka replacing Diagouraga and Erwin respectively. Mowatt returned to the bench whilst Bellusci was still absent from the squad after his bust up with Evans. An amazing 25,000 were inside Elland Road as the game kicked off in bright sunshine. Leeds were the first to threaten as Murphy broke free only to see Pope in the Charlton goal pull off a good one on one save as the Leeds midfielder looked to give the home side an early lead. The home side's early confidence took a blow on 20 minutes though as Gudmundsson was allowed to drive at the centre of the Leeds defence before rattling a post with a sweet 20 yard shot. 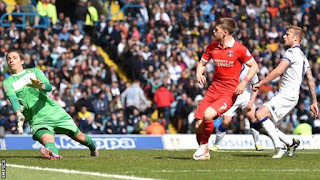 There was a definite air of end of season malaise about the game with both teams having nothing to play for but pride and the possibility of an extended contract for next season. Leeds were creating chances but failing to really test Pope in the Addicks goal. Dallas, Cook, Wood and Botaka all had shots blocked or drifted wide as both teams searched for the opening goal. The South Londoners were playing with a freedom from pressure that allowed them to test Leeds with their attacks. Not for the first time this season Leeds' extra generous approach to defending at home finally hurt them on 40 minutes. Fox escaped the Leeds defensive pack on the left flank and swung a lovely near post ball for Gudmundsson to clip into the net past a motionless Silvestri. 1.0 Charlton. The score remained the same to half time when Leeds left the field to frustrated boos from the home fans.

The urinal philosophers were silent. The inevitability of another season splashing about in the turbulent waters of championship mediocrity and yet another indifferent 45 minutes of football at Elland Road had finally taken it's toll. They hadn't even the energy or will to have a moan. Very strange! Back on the pitch Leeds started their final 45 minutes at Elland Road in the same low tempo fashion as the first period. 4 minutes into the half the Leeds defense was once again retreating faster than an Italian tank and Lookman took full advantage for Charlton as he almost walked to the edge of the box unchallenged before shooting past Silvestri to double the South Londoner's lead. 2.0 Charlton. Yes the same Charlton side who are already relegated were two up at Leeds. 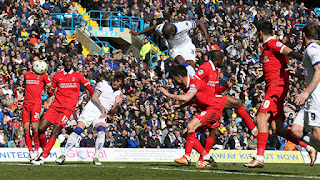 Mowatt replaced the injured Dallas and Leeds belatedly upped the tempo ever so slightly. Taylor got free down the left and picked Wood out in the box but the New Zealander's header bounced off the bar and into the path of Bamba who's shot clattered into the side netting. Cooper then headed another Taylor cross over the bar as Leeds increased the pressure ever so slightly. On 66 minutes Evans changed the formation as Antenucci replaced Bridcutt. Botaka now slotted in behind a front two of Wood and Antenucci leaving three in midfield. The new attacking approach together with Charlton sitting back to hold onto what they'd got led to more Leeds pressure. On 71 minutes Taylor threw in another teasing cross this time the unmarked Bamba rose to head home and give the home fans hope of a late rally. 2.1 Charlton.

A minute later Leeds could have equalised as a sublime pass from Mowatt released Antenucci in the box but with Wood screaming for the ball to be squared to him the Italian tried a thumping shot from a tight angle. I'm not sure what the Italian is for "you greedy bastard" but I'm sure that's what Mr Wood was mouthing to him. Leeds were now throwing everybody forward leaving gaping gaps at the back that Charlton failed to to take advantage of. Coyle had a half volley saved and Bamba tried another stinging shot but all to no avail. The referee's whistle brought to an end Leeds home season with victory for the already relegated Charlton 2.1. Not the best way to sign off for the summer to the home fans.

The match was an anti climax and in lots of ways an apt summary of Leeds' form at home this season. A lot of flattering to deceive, a lot of frustration and too little real quality on show. The home fans trudged away from the ground philosophically recognising that whilst we will finish slightly higher than last year this is another year of stagnation on Planet Leeds. There is the basis of a decent team but we are in desperate need of better quality to supplement the undoubted potential in the current Leeds ranks........and that will need better investment........and there lies the problem that has haunted Leeds for the last 12 years.

Preston provide the opponents for our final game next Saturday. Another large away following will head across the Pennines to enjoy the final day carnival atmosphere. One of these days we might even go into the final game of the season with a chance of real success.........................you can always hope!

MOT.
Posted by Andrew Butterwick at 21:05

all the best for your long awaited summer

Steven,
Thanks for the comment and all the best to you for your winter.
MOT

Its been a great read all season and thanks for making the effort. Enjoy the trip to this side of the Pennines next week and keep up the good work next time out.Fixtures out in only 7 weeks (smiley)