So Mr & Mrs Becchio are proud parents of a new daughter born early on Saturday morning and the reason "Our Argie" missed the MK game. No doubt his goal celebration will now change to something resembling him rocking his new born in his arms. Thank the lord that he's not taking any Paternity leave, which I think is now an entitlement of 18 years paid leave, and he's back where he belongs............doing Jermaine's donkey work up front. We certainly missed him on Saturday although the whole team seemed to have a mild case of "Liverpool hangover" But title winning teams win games when they're not at their best and Mr Grayson's charges definitely don't know when they are beaten. 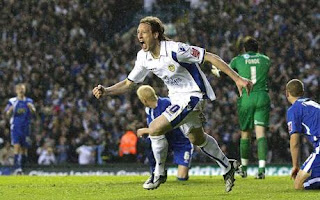 We will be without Crowe and Higgs who are likely to be out for at least 3 weeks after picking up injuries on Saturday. This will give Casper a chance to show what he can do and hopefully he will have picked up a lot of the good habits watching Shane in his impressive stint between the sticks.
Carlisle arrive at ER with an even 9 points from 9 games so shouldn't cause too many jitters amongst the hard core home fans inside the stadium. But I remember last year when the self same team arrived in West Yorkshire ready for plucking only for two ex Leeds boys, Graham and Bridges, to give the newly installed Simon Grayson a severe reality check! Can't see that tomorrow though? More likely that the Cumbrians will catch a post Liverpool back lash and Leeds bag a hatful of goals me thinks. The one thing that is absolutely certain is that there will at least 15,000 fewer fans inside the Theatre of Hope than the previous week cheering on their heroes. Suppose it just means that the ones who are there will just have to sing louder?
Can't wait.
MOT
PS: I've changed the music tracks to two of the themes that have been used as Leeds walk out at ER. The first one "Dance of the Knights" from Romeo & Juliet and the 2nd is "Strings for Yasmin" Both should make the hairs on the back of your neck stand on end...........or is it just me?
Posted by Andrew Butterwick at 20:29

Improvement on Bono. Although I can see why LUFC switch to MOT before that slow bit :)