The Happy Chocker had sneaked an early shift to ensure he could get to this game and the Quiet One was missing with Jordi standing in for him. As with midweek matches it's always a bit of a dash and with work matters still fogging the brain we gunned down the M62 to the home of the mighty whites. Big Steve and George were wandering down Elland Road as we arrived and we chewed the fat over the not so good performance on Saturday. Everyone was confident we were going to give the Cumbrians a damn good thrashing with predictions of 3:0 & 4:1 flying about.
Injuries are eating into Larry's plans of late and tonight we were without Higgs and Crowe but Becchio returned after his paternity leave. In the stadium the new loan Goalie, Fielding, was getting some practice in ahead of his debut on the bench. Jordi blagged a picture with Lucas Kop Cat and we were underway. 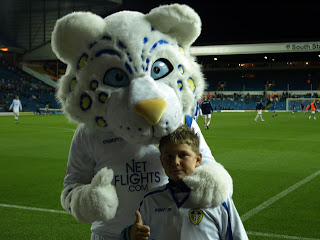 Leeds started brightly and soon had Carlisle on the backfoot as the Leeds piled forward looking for an early goal. Leeds' early superiority soon subsided as the away team scrapped for every ball and the match became disjointed. Leeds were enjoying most of the possession but as chances were spurned at the south stand end the visitors started to grow in confidence. Then on the half hour Leeds were awarded a penalty, don't ask me what for as I was a good 80 yards away. So who would take it? Well that would be Mr Beckford. With our appalling record of penalty conversions I think everyone inside the stadium with white blood expected the worst and sure enough we weren't wrong as Jermaine's weak effort was easily saved.........difference was this time he followed up and scored to the relief of the 19,000 die hards half filling the stadium that last week was rocking to a full house.
The goal sparked Leeds and their crowd to life and the fabulous Snoddy nearly doubled the lead shortly afterwards with a curling shot that came back off the inside of the post. Things were looking good. We got to Half time with a clean sheet surviving a free kick from ex Leeds favourite Ian Harte and in doing so maintained our record of not conceding in the first period all season. Whilst the first half hadn't exactly set the pulses racing we were in front and had created a number of chances. Becchio was working well and showing how much we missed him on Saturday and Kissy and Naylor looked solid at the back. 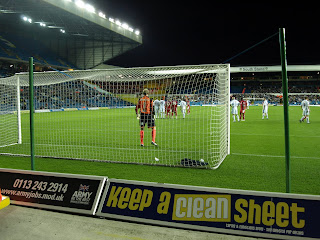 The 2nd half spluttered into life with Carlisle looking the more likely. The stewards in the kop were beavering away making their presence known including warning me for taking photos. Their's must be a satisfying job?
Kavangah was ruling the roost in mid field and Larry withdrew Howson for Prutton to try and counteract his wily skills. Killa was already on for Bromby, another one filling the treatment room. But it was all to no avail as the Cumbrians gained the upperhand and the whites resolute rearguard was working overtime to keep the precious lead. News that our nearest rivals Charlton were getting stuffed at Colchester buoyed the fans in the kop and they raised the decibel level to try and lift the teams spirits. As Carlisle pushed for an equaliser they left gaps which Leeds try to exploit but a combination of wayward shooting and good goalkeeping kept the score to a single goal.
Carlisle were the last team to win at ER and they were again playing the role of party poopers as they battered the Leeds goal. Casper didn't look secure in the goal , despite the pleading of the advertising hording, we've now got used to the assured presence of Higgs and at times it was like glimpsing some of last seasons most nervous moments. Scott Dobie was thrown into the fray as a last effort by the visitors and he soon dashed the home fans hopes with a powerful header from a corner that Casper couldn't keep out. 1:1. Bummer.
This did kick Leeds into life and we piled forward looking for yet another late late winner. Both Snoddy and then Beckford ignored the chance to win it as Leeds finished with ten men after Snoddy appeared to twist his leg and limped ominously from the field. Despite the last minutes of "cavalry charge" football we couldn't snatch that illusive winner. In the end a draw was probably a fair result and the Sheep loving fans who made their way to Yorkshire in good numbers and good voice were the happier of the two sets of fans. 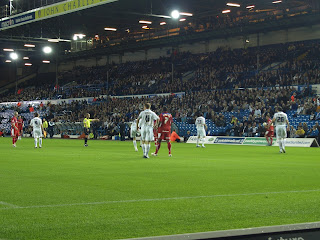 As we trudged to the car the result felt like a defeat. The callers to the radio phone ins were all doom and gloom but hang on a minute! Charlton, uddersfield, MK, all lost and Swindon and Millwall drew.............only Bristol Rovers actually won. We are still top of the league and we're the only unbeaten team in the country. That's not that bad is it?
Charlton arrive at ER on Saturday for what will probably be a near full house (excluding the upper East stand) Larry needs to get some energy into some of the weary legs on show tonight before the top of the table clash. The treatment room will be on overtime as Parker, White, Bromby, Crowe, Higgs and now Snoddy line up for attention.
All in all it was disappointing to only draw when we could have clearly won with steady finishing but we can't win every game and to enter October with a 3 point cushion at the top can't be bad.
Roll on Saturday, can't wait.

Posted by Andrew Butterwick at 23:11