This was always going to be a different game. For a start we were playing one of the top teams in Europe in a cup match under the lights at Elland Road and secondly I was doing the summarising on Yorkshire Radio's/LUTV's live commentary. So I had forgone my usual seat in the kop for a place in the TV/radio gantry high above the West stand for this momentous game. 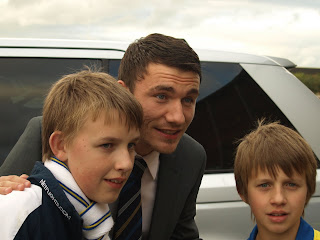 I arrived early enough to see the Leeds players arriving and signing autographs and posing for photos with the fans. Big Lubo, Snoddy and Casper did the rounds before disappearing into the changing room. Even at this early time you could feel the anticipation dripping from every corner of LS11 as fans dashed from work to the Theatre of Hope. I was resplendent in my work suit and tie as I made my way to the press box with Thom Kirwin with my press pass dangling impressively around my neck. Mmmm free drinks and sandwiches for the throng of journalists gathered for the game. Representatives from TV, radio and the national press were all busy preparing for the clash of these old adversaries. I watched as the newspaper guys filled in most of their report before the match????? leaving room to just add the odd bit of match facts to the copy before meeting the tight posting deadline after the match.
Lawro and John Aldridge were at the coffee machine as I tried to look as if I belonged. Having soaked up the pre match buzz in the press room I climbed the stairs to the gantry to take my place in the commentary box along with my Yorkshire radio colleagues together with the likes of Five Live, Sky TV and even good old Radio Leeds. I could get used to this!
The view from the gantry was stunning as I eagerly discussed my role as a fans panel member in the forthcoming broadcast. The team news confirmed that the scousers had made 8 changes to their weekend side but it was still stuffed with current internationals. The ground began to fill as KO approached and the two sets of fans cranked up the noise in anticipation of the arrival of the two teams. When the teams emerged into the West Yorkshire Autumn air the roar was deafening. 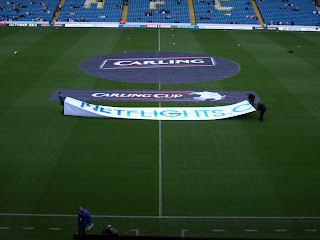 Dominic Matteo had taken his spot besides me for his spot supporting Thom with the commentary. Leeds started well with their well drilled midfield and defensive unit slipping into the groove from the off. Lubo started in preference to the returning Naylor at the back as Leeds responded to the magnificent vocal backing they received from a packed Elland Road. The urge to join in with a chorus of MOT was immense but I managed to resist.......................but when Snoddy jinked his way down the right and delivered a perfect cross onto Doyle's head I was already shouting "get in" before the ball sailed over the bar. "He really should have scored" Dom commented with massive understatement. But it wasn't long before we had the ball in the net as Lubo headed a corner goalwards only for Becchio to help the ball into the empty net. Problem was that Lucciano was ajudged to be offside. Frantic viewing of the replays showed that Becchio was level and so the first harsh decision of the night went against the mighty whites. Dom was clearly impressed by what he was seeing & hearing as the kop gave a lusty rendition of "his" song. "They're singing about you Dom" Thom observed. "Yes it's brilliant" the former Leeds hero replied.
At the other end we saw some Premiership class as first N'Gog (a nice scouse name!) slipped Lubo with ease and then Ryan Babel turned on the afterburner as he left Hughesy for dead. In general though it was the reds who looking the more worried team as Larry's foot soldiers harried and battered their feted opponents with football of no little skill. Snoddy was tearing the Pool apart down the right hand side as Dossena (which part of Liverpool does he come from?) didn't know which way to turn in order to stop the galloping Scotsman. Snoddy had a trusty ally in Becchio as he started to get on top with his battle with Carragher and Kyrgiakos at the back. Jermaine was having one of his quiet games.
Whilst Leeds had had the better of the first half it was the team in red who nearly went in front just before HT as Higgs pulled off a good save from a Riera (Toxteth?) header after an intelligent free kick. Leeds marched off to a thoroughly deserved standing ovation at HT. Up in the commentary box we all agreed that the whites had edged the half and Dom thought Rafa might be bringing Gerrard or Torres on before long. The goal that never was was dissected by the media masses and everyone agreed Leeds should have been in front. Not much consolation though.
Encouraged by my first half performance as a pundit I started to enjoy the role as the second half progressed. The game was as taught as a drum. It was Leeds who started the brighter and twice Beckford had me muffling a triumphant shout as he failed to take good chances. The two sides traded possession with Leeds showing their inexperience at times by giving up the ball too easily. Then the key moment and probably the most contentious. Mascherano pirouetted and landed a perfect elbow on the back of Mr Beckfords head, who went down like a sack of King Edwards. Now the ref was no more than ten yards away and the linesman was in line with the incident but neither of them appeared to see this dastardly crime..........not even a booking.
This sparked Jermaine into life as he turned and drilled a good shot inches over the bar. Snoddy, who was unmarked on the penalty spot, was not amused.
Leeds were beginning to tire and they allowed Liverpool to take a short corner and work a dangerous ball into the box only for the magnificent Kissy to head clear but only to the Argentinian villain whose pass found N'Gog who fired in the opening goal. The 5,000 travelling fans danced in relief as the massed home fans responded with a defiant chant of "We are Leeds"
The goal visibly deflated Leeds and we were on the ropes for a good 10 minutes before some composure was recovered. Thom observed that Torres and Gerrard were ominously warming up for the visitors but I reminded him that it wasn't a problem as we were doing the same with Enoch and Robbo! 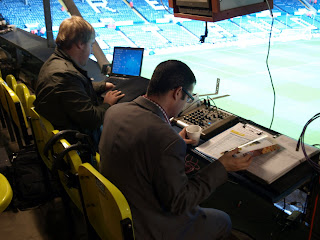 Becchio and Hughes were replaced by Kilkenny and Grella but neither could make any impact in the last 10 minutes. Finally Enoch came on for the last 5 minutes. Dom thought this was a good move as he could win some headers and flick ons to worry Liverpool in the final throes of the game. "You've not watched him much have you" Mr Kirwin asked.
So the game ended with the reds relieved and the whites proud of their performance. A standing ovation for the bedraggled Leeds team came from the appreciative home crowd. A disappointing result especially after the goal and the sending off incident but a performance that will have impressed many a watching eye on the their TV screens at home. Picking a MOM was difficult.......Snoddy, Becchio, Kissy, Lubo...........pick any one of those and then consider Jonny Howson and Doyle who ran themselves into the ground. We might have lost but we can certainly hold our heads high after this one.
I had to ask Mr Matteo about that fucking great goal in the San Siro. "It was fantastic as loads of my family were there (he's part Italian) and it's stuck with me ever since, when I hear the Leeds fans singing that song it takes me back everytime" Top man. I stayed and helped with the post match summary and phone in as I was opining that the real big match this week was aganst MK Dons a tired Mike Grella wandered by on his way to his car clutching a Liverpool shirt under his arm. Reluctantly I left at close of the show.
There was one last surprise for me as I swung the doors of the Radebe suite open into the cold night air to be surrounded by autograph hunters? I know I'd been good but............then I saw a certain Stevie G on my left shoulder........"Can I just get by Stevie.........cheers" and I was off to the car and the crawl home. I know we lost but what a night. Magic. Roll on MK Dons.
MOT
Posted by Andrew Butterwick at 19:47

Nice post, a great insight. And a good point you make about the press writing the bulk of their reports before the match. I guess being up on the gantry you were spared the clamour for truth whenever something vaguely of note occurred: "What happened there?", "Who got booked?", "Was that from a free-kick or a corner?"

Makes you wonder whether some of these buggers are actually watching the game..!

TBH
thanks for the comments. The press guys certainly swap notes on who did what. MOT

Glad to see that you enjoyed playing your part in what must have been a glorious night at Elland Road despite the defeat. Keep up the good work.