Something for the weekend?

Leeds will approach this week's most important game against the Franchise Dons on a high after their heroic display against the "Alloy Wheel stealers" from Merseyside. The consensus view was that Leeds had been unlucky not to get something from the game but in some ways I think we got the best of both worlds. We showed the "millions" watching on TV what a good team we are. We frightened a top Premier league to death and all Leeds fans can hold their heads high after such a battling and skillful display...............all of that and we don't have the distraction of more Carling Cup games to hinder our march to the League 1 title. That's what I call a "win win" situation.One debate the Liverpool game did re-ignite was that of the merits of Jermaine Beckford. His speed and ability to get behind defences, even one with Mr Carragher in, was there for all to see and admire but alongside him Becchio was literally working himself into the ground in stark contrast to Jermaine's strategy of energy conservation. The two styles couldn't be any different and a lot of fans sympathised with Becchio when he reacted badly to being subbed but whilst JB is on the field the fact is that he is the most likely to score......................no matter how many chances he has previously underhit or scuffed! 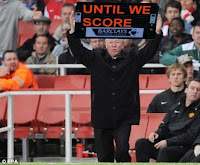 Tomorrow's clash with the Dons will give Leeds the chance to exact revenge on the team from the land of the concrete cow after last seasons 3:1 drubbing, a defeat that was the final straw for Gary Mac's reign as boss. It will be fascinating to see who gets the nod at centre half with Bromby, Nayls, Kissy and Lubo in the mix? If Nayls is fit I would take the harsh view and play him alongside Kissy with Bromby at right back. Tough on Lubo who's had a superb spell at the back. That debate will run and run until 2.15pm tomorrow.
Most of you will already have seen the funniest picture of the week with FergieRednose holding up the added time board but I thought we'd have another chuckle. Incidentally both Sky and the BBC re-ran the Salford Yanks v City game and timed the true added time and the officials had got it spot on......................still why let facts get in the way of a good dig at Manure? 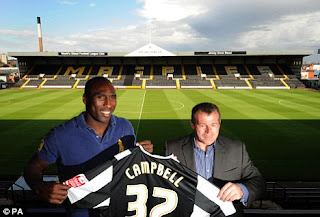 News that the FA are investigating the takeover at Notts County, you know the team that a "consortium" mysteriously bought thinking they were Newcastle United, was hardly a shock. Neither was Sol "I'm in it for the long haul" Campbell's decision to take his ball home after just one game claiming he was not happy with the progress Notts County had made so far? Of course he wasn't just in it to make a few, well £120k pounds, for just one match was he? Greedy twat.
Early train from York for the match tomorrow. Tweets galore, more quizzes and banter mixed in with a vociferous away support and three points. Sounds like a perfect Saturday?
Can't wait.
MOT
Posted by Andrew Butterwick at 18:46