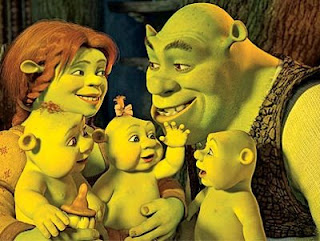 This week has seen a number of significant birthdays. It's 50 years since the M1 was officially opened to link the capital with Leeds, its the 20th anniversary of the first Wallace and Grommit film and of course Wayne and Colleen have celebrated the birth of their first sprog. What not many people realise is that the high profile celeb couple actually had triplets as shown by the following exclusive photo!
Their choice of name was interesting, Kai? Presumably they wanted to make sure that he could spell his name before he went up to High school?
This weekend sees the 1st round of the FA Cup and Leeds start at this stage for the 3rd time with a visit to Oldham. A bit of history will be made as the game will be the first one streamed live on the T'internet hence the stupid kick off time of 5.15pm. Now our merry bands has mixed views on the tea time start. On one side there's me being somewhat of a traditionalist who still switches the radio on Monday lunchtime for the cup draw and thinks all games should kick off at 3pm on a Saturday by royal decree and on the other the Happy Chocker is pleased that the Quiet One can fit his morning game in before trekking over the hill to Oldham. Once the whistle goes none of that will matter as both teams go hammer and tong at each other for the right to have their ball in the velvet bag for the 2nd round draw, whenever that is.
Tricky as the tie will be Leeds should progress on the evidence of their last two 4:0 triumphs although they will be weakened by the absence of Vokes and now Kandol (3 game ban for being a pratt after the Yeovil game). Enoch and Grella will be relishing their chance to star alongside the awesome Becks..................assuming that Becchio doesn't make a surprise return? On a personal note the game with Oldham gives me a chance to shout abuse at someone I used to play alongside (in another century!!!) the opposing Manager Dave Penney. Mrs MOT and I even went to his and Karen's wedding. Dave will have mixed feelings on Saturday though as originating from Castleford he is a big Leeds fan!
Another late late midweek trip is now confirmed with the cancellation of the Swindon game. Thankfully no train tickets had been purchased. I think it's debatable whether we should have taken the postponement given the strength of the squad? If we get a run in the cup, and don't forget the paint pot cup, the matches could start to pile up after Xmas? Just a thought but I think a centre back pairing of Bam Bam and Bromby should have been secure enough?
Bonfire night and the Father in law's birthday today so have to go and do my duty.
Roll on Saturday. Can't wait.
MOT
Posted by Andrew Butterwick at 18:31