Selby station was alive with expectant chatter on the prospects of the mighty whites continuing their impressive start to the season at the expense of the cider drinkers from Yeovil. After all today was the last day of the "Month of Death" and we were still sat proudly top of the league with a 4 point cushion. Yes we'd lost our unbeaten record in the bear pit in Bermondsey last Saturday but bounced back in awesome style at Bristol on Tuesday so hopes were high that we could dispose of Yeovil in some style. As we piled onto the Leeds bound train I was certainly looking forward to another goal feast................with just a small amount of trepidation that "after the Lord Mayors show" at Bristol we might just be a tad too complacent and fluff our lines? 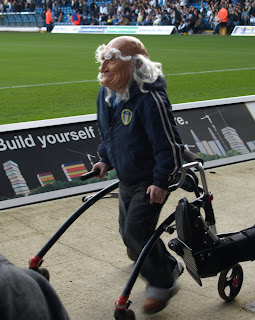 Leeds city centre was in the grip of Demo fever when we arrived as 100's of police were successfully keeping apart two opinionated groups who wanted to shout at each other and tell each other they were wrong? Each to their own but as long as it didn't interfere with our well worn routine in getting to the Theatre of Hope I couldn't give a monkeys. And thankfully it didn't.
Early celebrations of Halloween seemed to be every where from the group in the members bar with scary masks to the young lad who sits in the disabled area with a stunning old man mask on. He was spit of a grinning Max Wall!
So to the match. Both HC and the Quiet One were predicting a resounding victory buoyed by fresh memories of the demolition of the Pirates. The team was the unchanged and the balmy autumnal weather was perfect for football. Let the savaging of the up starts from Somerset begin. Leeds were again out of the blocks quickly and all over Yeovil like a rash in the first 10 minutes but once Yeovil came up for air they showed that they hadn't come here to defend as they knocked the ball around with some style. Their belief in playing a positive game showed dividends as Obika and the tall striker Williams began to threaten the Leeds goal. Indeed it was the Spurs loanee, Obika, who had the first chance of the match when he forced an excellent save from Casper with a shot that he will have been disappointed didn't open the scoring. Warning bells were ringing and to their credit the Leeds defence heard them and as they have done all season dug in and battled hard for every tackle, header and 50/50 ball.
In the Kop the diligent stewards were working overtime to ensure everybody were firmly planted in their seats and not surprisingly this inflamed the more bolshy Leeds fans caught up in the passion of the game. It wasn't long before a silver haired miscreant was led away by the boys in blue to a hostile reaction from the rest of the Kop. The smile of satisfaction on the face of the lead steward was reminiscent of one Peter Mandelson uses when he's trying to connect with the people!
Back on the field Yeovil continued to have the better of the first half and when they headed wide from an inviting cross after 30 minutes there was lots of nervous shuffling in the Elland Road seats. The travelling Wurzel eating Cider drinkers began to find their voice and it looked anything but one sided contest. Then just as the ER "doom & gloomers" were starting to rehearse their "everybody's useless" mantra we took the lead. Bradders chipped an intelligent ball into the box............Jermaine distracted the goalie and the ball bounced into the Yeovil net. Phew! That settled the nerves and as the HT whistle went there was relieved applause for the men in white as they disappeared for their cup of tea.
I was wondering if this is one of Larry's tactics now? ie lull the opposing side into a false sense of security in the first half before striking like a patient Cobra to snatch the lead! 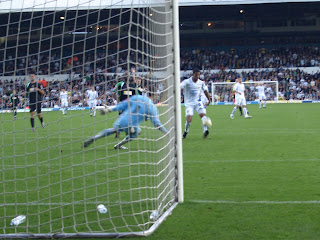 Leeds came out for the 2nd half early possibly with a bit of a flea in their ears from Larry's HT team talk whatever the reason Leeds started the final 45 minutes with similar purpose as they did at Bristol. Jermaine soon had the ball in the net only for it to be chalked off for offside. Cue the familiar snarling "what me ref" look from our goal scoring hero. Yeovil were still looking dangerous when they had the ball but as Leeds changed through the gears the white footballing machine began to purr. Vokes, who looks better with every game, worked himself into a shooting position and tested the goalie. Beckford was prowling like a wounded Tigress along the Yeovil back line. He was soon to have a 2nd offside goal cancelled out after a delicate finish. Leeds were stoking the boiler well and when Gradel and Kilkenny came on on 60 minutes for Hughes and Doyle the signs were ominous for a tiring Somerset outfit.
Gradel, with his trademark yellow line on his head, was like an effervescent firework fizzing all over the park causing havoc every time he touched the ball. The crowd responded by cranking up the previously low decibel levels and within ten minutes we were 2:0 up and cruising. Mad Max received the ball on the right and jinked into the box................with a swivel of his hips and a drop of his shoulder he found some space to drill the ball into the far corner of the net. Brilliant!
The ER sound machine was now on full throttle as news of Charlton's problems in Cumbria filtered through. "Sign him up, Sign him up, Sign him up" the Kop advised the watching Capt Birdseye of their instant cult hero Mr Gradel. Leeds piled forward and both Vokes and Howson went close to adding to our goal difference but it was Jermaine who finally got his name on the score sheet when he latched onto a Vokes flick to plant the ball past the advancing goalie for his 11th goal of the season. 3.0 Leeds and the whites were now playing with Yeovil like a mischievous cat does with a mouse. The ball was passed with confidence right round the pitch with an arrogance hewn on hard work and self belief that is the trademark of Mr Grayson. 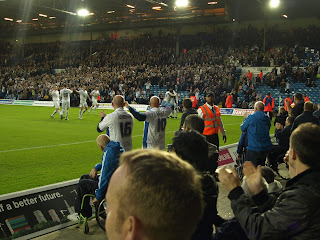 Tresor made an appearance and nearly scored with his first touch as he rose to meet an inviting cross only to see his header bounce off a Leeds player and wide. But it wasn't long before Tres got his 2nd in a week as he finished off an excellent move by burying a Snoddy cross into the back of the Yeovil net. Seems a long time since he was booed off the pitch in Leeds' first season in League 1?
Leeds finished the game playing ole football heading for a 4.0 win for the 2nd time in a week. The 24,000 fanatics headed home to their Halloween parties with one treat already tucked away having seen another 5 star performance. On this form Leeds will run away with the League.
The chatter in the bus and train queues was all about Charlton and Colchester's loss leaving Leeds 7 points clear. The feel good factor is back at Leeds. Yes we were playing Yeovil and not Liverpool but that wonderfully addictive drug, watching your team destroy the opposition, had kicked in. Nothing could spoil my day as I arrived home with a big grin on my face. Halloween party here I come.
MOT
Posted by Andrew Butterwick at 08:26