Games are coming thick and fast up to Christmas. Orient are the visitors tonight to the Elland Road Citadel as Leeds seek a 20th consecutive unbeaten game at their famous home. On paper it should be like shelling peas but history has taught most whites fans to have an element of caution over each game.................still think we'll win handsomely though! 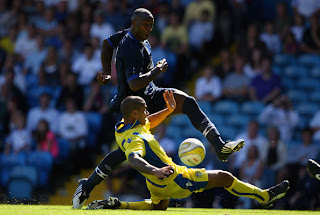 Most fans should have dried out by now after the drenching we got at the Withdean "Stadium" but if you do spot anyone with trenchfoot you'll understand why. I read with interest how the players at Wigan have personally paid back all the fans who trekked to White Hart lane to see them get stuffed 9.1. Wonder if this will set a precedent? If so we should be able to claim some back pay for the last 5 years? Mmmmm maybe not.
Tresor is available again tonight after his suspension and assuming there are no injuries from Saturday I would think that will be the only change. When Shane Higgs is fully fit he will pose a selection dilemma for Lord Simon Grayson. Casper will feel harshly treated when he's replaced but I think he will go with the best goalie and that's definitely Shane and not Casper. The confidence the rest of the team gained from the outing at the Withdean should ooze out every pore tonight. Special mention for Paddy Kisnorbo. His performance just gets better with every game. He toyed with the Brighton forwards like a cat would with a captured mouse, letting them run about but when they got near the goal swatting them away with disdain. He is an absolute rock and I'd love to see the centre halves that Leicester have if they could let him go. So a dash from work to gulp down some tea in the members bar and then to the match tonight. doubt whether we'll break the 20,000 crowd barrier but the ones who will be there will hopefully see another step on the road to the title.
Can't wait.
Posted by Andrew Butterwick at 07:44