Ominous forecasts of atrocious weather on the South Coast did little to dampen the spirits of our band of brothers as we eagerly awaited the London bound train at Selby station. Even when the train finally arrived and all the seats were reserved we were still remarkably chipper........after all we were on our way to watch the mighty whites try and win 4:0 for the third league game in a row. What or who could possibly puncture our match day enthusiasm? As the train stopped at that classy town, Doncaster, we were about to find out.
With all seats reserved we had naturally sat in one of the many empty seats. I'd even scrawled "reserved Selby to Kings X" on the ticket perched on the seats for good measure! Inevitably we were sat in someone else's seat so when the rightful owners got on at Donny we were more than happy to shuffle along and find another resting place. So why did the rightful owner of the precious seats have to be led by someone whom Gene Hunt (Ashes to Ashes) would have described as "Bolly Knickers" or Beefy more eloquently called her, a posh twat? So belying her obvious high position in society, well that's clearly what she thought, she advised us to sod off and take our rubbish with us. "It's not our rubbish love" was the truthful reply as we left definitely perched on the moral high ground. I just hope she'd forgotten her umbrella.
So we were left standing for the rest of the trip to London not that we were downhearted..............no the altercation with Bolly Knickers had fired us up and the John Smiths and quizzes went down a treat as we hurtled south.
The weather darkened the nearer we got to Pink Pound Town. We found less than welcoming refreshments in the Queens Head pub near Brighton station where we met Olav from Norway. A Leeds fan he'd travelled with 14 of his mates from Norseland and whilst he'd found his way to Brighton to watch the Mighty Whites his "mates" had gone to Stamford Bridge to watch some team in blue? John Midgeley and his daughter joined us sharing his local knowledge of the best way to the ground. Turned out to be a trek up a muddy track for an eternity before the ground came into sight...................and what a sight. How Brighton got this ground approved by the League is more mysterious than trying to understand the rules of Australian Rules Football! It is set in a park with lots of nice trees surrounding it and some impressive tennis courts at the front. There is a superb running track circling the track and field area where sometimes football is played. Temporary stands are dotted about in no particular order for when people turn up to watch the Football. What a shambles! 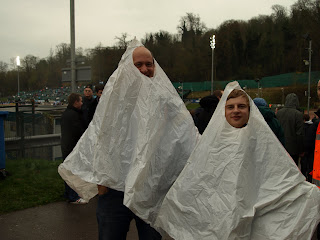 We were thoughtfully given free white bin liners to keep off the impending rain as we entered the ground. Suddenly the away end resembled a chapter meeting of the Beeston Ku Klux Klan as the bin liners were put to good use in repelling the Sussex rain.
Now I admit this report will be patchy as my eye's aren't what they used to be and trying to pick out what's happening at the far end of the pitch was difficult to say the least from our "vantage point" behind the goals. First thing I noticed was the absence of Nayls and Johnson in the Leeds team. Yet again our esteemed leader had kept his cards close to his chest in the game of chess he was about to play with Mr Poyet. The ex Chelsea, erstwhile coach of Leeds, received a generally positive reaction from the Leeds fans as he took up his place in the home dug out.
Given the surroundings and the distance from the pitch it was understandable that the atmosphere was non existent as the game kicked off. The players must have thought they were playing on a park pitch on a Sunday morning.
Brighton started brightly buoyed by their recent success but once Leeds adapted to the conditions they started to move through the gears and assume control. Kilkenny buzzed about in the centre of midfield dictating playing, Kissy snuffed out any home attack like swatting flies and Snoddy was roaming the pitch causing havoc. The swirling wind and rain didn't seem to impact on Leeds' resolve and thankfully the Leeds fans in the away end were mostly straining their eyes to catch what was happening far end as Leeds attacked the opposite end
Beckford escaped his marker and looked odds on to score only to be denied by the linesman's flag but it wasn't long before we were in front. Beckford made a slicing run across the home defence and turned the ball back into Snoddys path who hit an absolute peach into the top corner of the Brighton net. Leeds were on a roll now and soon after the restart Beckford hit the post...........I think and even when Brighton missed a headed chance Leeds didn't stutter from their path to victory. 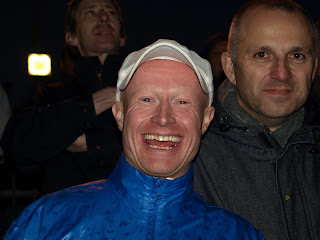 The now very wet away fans were trying to generate some atmosphere by their renditions of all the favourite songs but with no roof and stood a million miles from the pitch it was a tad difficult! The 2nd goal came as the superb Kilkenny picked out Beckford from 30 yards who controlled the ball and rolled it past the floundering goalkeeper with consummate ease. Another exquisite goal. Results from elsewhere were looking good. Even though it was a dark wet November afternoon there was a feeling that Leeds were tying another white ribbon round the League trophy with this classy performance. More was to come before half time as the hard working Vokes went close bang on Half time. We'd even had a good penalty shout turned down. Poyet, Poyet what's the score? taunted the away fans.
On my travels I often come across the Sherburn whites. They are always in high spirits and today was no exception as we swapped thoughts during the interval. One of their number, Skunk, has ambitions to be famous so his ugly mug is the one smiling at you in the picture. Why is he called Skunk? Mmmmm let's just say that there's usually a decent gap between him and the rest of the Sherburn whites! 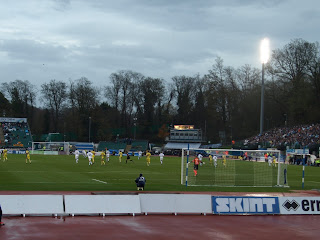 Leeds kicked off the 2nd half with the wind at their backs and attacking the away end. At least we would see more of the game. The rain was now bucketing down drenching the exposed fans but this didn't dampen spirits as less than tuneful version's of Gene Kelly's classic "Singing in the rain" drifted from the away end. On the pitch Leeds' workrate and pressing style was far too much for the home team when they were in possession and when Leeds had the ball they zipped the ball about as if it was a perfect day for playing football. It was all looking very easy. I counted two good penalty shouts as Leeds threatened to embarrass their south coast hosts with more goals. Kissy had two attacking headers that didn't match his commanding defensive efforts but it didn't seem to matter as Leeds cruised through the rest of the game. They got a richly deserved third late on when Prutts, on as a sub, broke the length of the field and picked out Kilkenny who nonchalantly finished with ease. By now the rain was coming down in stair rods but the Leeds fans weren't bothered. Another hat full of goals, another 3 points and another good away day. Kilkenny and Kissy were outstanding ably supported by another classy team performance. Simon Grayson has moulded a team ethic and spirit that will take the club a long way and the fans know it. Before he disappeared down the tunnel he acknowledged his adoring wet bedraggled fans.
The journey home was long but shortened by more quizzes and a couple of boxes from KFC. But that warm glow of victory away from home is a good one especially when you've seen a team who now stand head and shoulders above anyone in League One. It's been a long time coming but we are now officially on our way back. 6 points clear at the top with a game in hand and most other teams around us stuttering with the exception of the Puppy Dogs. Life is definitely good on Planet Leeds. Sit back and enjoy!
Orient on Tuesday at ER. Bring it on.
MOT

Posted by Andrew Butterwick at 09:14

Hi Andrew
Olav from Norway here. A great game to attend, though even I got wet under the roof. Good blog, nice combination of match analyse and more humourous reflections concerning your trips. Nice to meet you. Thanks for assist me to the ground, and for a short time taking care of a lost norseman on the english riviera:-) MOT
Olav

Thanks Olav,
glad you Leeds playing at their best after your long trip. Here's hoping for more of the same tonight!
MOT