Albert Johanneson was the first black player to play in the English league's top division when he starred for the mighty whites in the 1960's. For those of you old enough he is remembered as a cult figure who could turn a game in an instant but when a certain whipper snapper of a Scottish lad called Eddie Gray appeared on the scene he fast faded into the background at Elland Road. Albert sadly died at the young age of 55 in 1995 a lonely alcoholic living in squalor in Leeds. 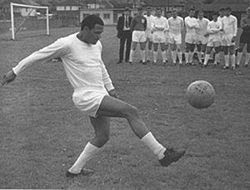 I can hear you asking wtf he's got to do with today's game with Uddersfield...............................well nothing but his legs made a Baggies fan chuckle this week! A work colleague, the said Baggie's fan, had come to Leeds and we had finished a client visit when he suggested a quick cup of coffee. As we were in Bramley I knew the perfect place to take him...............the McDonald's opposite ER! As most of you will know this is bedecked with photos and memorabilia of Leeds United chronicling the past glory days. It also has some stools that are supported by Albert's legs. Mr Boing Boing Baggies even rang his Derby supporting son to tell him about Albert's legs.
West Yorks police have dictated the lunchtime kick off for today's clash of the West Yorks neighbours. That won't dilute what will be a white hot atmosphere inside an Elland Road packed to the rafters as Leeds try to reverse the recent trend of Puppy Dog success against Lord Grayson's men. Their fans are very proud of the fact that they have topped the league last season...................the West Yorkshire League...............having triumphed twice against us. Mmmmm strange how they think that's more important than actually getting enough league points to get out of Division 3? Hence the saying "Form is temporary Class is permanent"
Anyway I hope they all enjoy their Cup Final day experience.
Leeds' form coming into this match is awesome. Even in the draw against Kettering we could and should have won by a handsome margin. I can feel a massacre coming for some poor unfortunate team who are in the wrong place at the wrong time when Leeds conversion rate of chances gets to 50%.........................It would be nice if it was today against the Puppy dogs wouldn't it?
Huddersfield have been scoring for fun and with the money they have spent in the summer on players lying 5th 14 points behind Leeds won't be seen as good enough by their ambitious chairman. Lee Clark was apoplectic after his teams surrender of the lead 3 times against basement club Tranmere on Tuesday so it's safe enough to assume that things aren't all sweetness and light in the visitors camp........................question is will that inspire them to greater efforts or send them into their shells? Time will tell but a nice early goal for Leeds would feed the doubts in their players minds and boost the already overflowing confidence in the Leeds camp?
After my correct prediction of a 2:0 win against Oldham I am confident of another 3 points deposited in our promotion bank by the end of the game.................the score Mmmmm let's say an optimistic 6:1.
C'mon Leeeeeeeeeeeeeeeeeeeds
MOT
Posted by Andrew Butterwick at 08:23