Just over 48 hours since our last trip to see the Mighty Whites and the Happy Chocker & yours truly were heading over the hill to Oldham to see if Leeds could extend their impressive League form. Well we were crawling on the car park otherwise known as the M62 if the truth be known. Not only that flurries of snow were mixed in with the rain that was testing the windscreen wipers. Just another wet away day in the life of a football fan.
Having negotiated our way to Oldham, twin town South Pole, and parked in the muddy car park we ventured from the warmth of the car into the horrendous rain and wind that was smothering Boundary Park. Thankfully the away end does have a roof on and packed in with another 4000 good humoured Leeds fanatics the mood soon brightened.
Lord Grayson had made a bold decision in his team selection as he shuffled his pack and left Beckford, Snoddy & Becchio on the bench whilst Doyle was left at home in front of a nice warm fire. Kissy had failed a fitness test so the strength of Leeds' squad was about to be put to the test. Into the team came Vokes and Mad Max up front ex Jesus Prutts in midfield and new loan signing Ephraim started wide on the left. Wow! The phrase "In Grayson we Trust" was going to be tested tonight?
The decision to give Jermaine a rest ahead of the punishing schedule was understandable given he would be up against the rotund Mr Gregan, who in previous encounters has kept our star quiet with a less than subtle approach to tackling and verbals.
As the match got under way the magnificent away support were in good voice and easily out numbered the home crowd in the three sided ancient football ground. Oldham looked lively early on and found some joy attacking Jason Crowe's flank. The first real chance of the game came from that route as an inviting cross was headed wide when it looked easier to score. Wake up call for Leeds. That seemed to be the kick up the backside Leeds needed as they then started to put some decent passes together with Kilkenny again to the fore controlling things from midfield. Sam Vokes was leading the line and looked more comfortable than when he plays alongside Beckford. Oldham were playing a high line in defence and were caught out with a superb through ball from Kilkenny who found Crowe behind the full back but his shot skimmed past the post for a goal kick. Prutts had a similar chance but was ruled offside as he rolled the ball into the net. Leeds were looking ominous though and it wasn't long before Vokes sprung the rusty offside trap and was bearing down on goal.............surely he must score.........but he didn't as a tame rushed shot ran safely into the arms of Flahavan in the Oldham goal with Mad Max all on his lonesome square and in front of the open goal! Bummer. A goal was coming though and the confidence in the team filtered through to the fans who were enjoying reminding Mr Gregan of his rather high body mass index!
The opening goal came just before half time when the bubbly Mad Max got free down the left beat his man and sent an inviting ball into the path of Neil Kilkenny.............1:0. Chance to stamp our feet and jump up and down to keep warm. 1.0 up last year meant severe nail bitingitus as we hung on vainly hoping that we didn't concede. Difference this year it's almost "start the car" time as the resolute defence repel all attackers and the team ooze confidence and class all over the pitch even with an understrength side. Oldham were now on the ropes and the HT whistle saved them from a killer second goal.
So Lord Grayson's master strategy of resting key members of his squad seemed to be working as we pondered results elsewhere over the interval.
Leeds started the final 45 minutes well and Sam Vokes soon missed another good chance to seal the game. Oldham seemed to get a second wind and huffed and puffed but never really troubled the Leeds back line with Lubo having one of his more productive games.
Of the new lads Ephraim looked solid & lively but tired quickly in the 2nd half and Capaldi at left back looks a very good acquisition. It'll be interesting to see the competition for places with him and Parker. 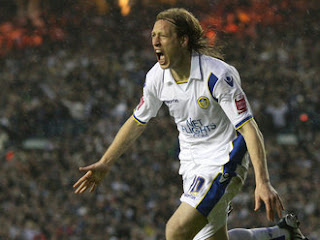 As the half went on the need to kill the game off with a second goal started to gnaw at the nerves of the away fans as more chances were being spurned. Much as Vokes was playing well in his all round play he was the main chance missing culprit and I'm sure he won't have slept easy with memories of his chances going begging. To be fair Flahavan was having a good game but it was a disconsolate Mr Vokes who trudged off for Becchio after 75 minutes. Becchio, with gloves and a short sleeved shirt? along with Snoddy, on for Ephraim, added some spice to proceedings from the off and when Snoddy exchanged passes with Gradel only to be beaten to the chance by Becchio it was 2:0 and game over. I'm sure I could hear a sigh from Sam Vokes from where I was stood. Sometimes football can seem like a cruel game?
Don't know what the stat is for the number of late goals Leeds have scored this season but it's a lot................it's also a sign of a team with masses of self belief. The game finished 2:0 and Leeds still 6 points clear as Charlton also won. I can just imagine the Charlton boys getting back into the changing room hoping that we've dropped points and their joy turning to despair as yet again we've won, yet again we've kept a clean sheet and we've still got a game in hand. They'll soon just be playing for 2nd place. Better still Lee Clarke was reading the riot act to his Puppy Dogs after their 3:3 draw at home to the mighty Tranmere. All good stuff in front of their Cup Final on Saturday!
In the end Leeds won with plenty to spare and that always makes for a good trip home. We even got straight out of the car park which is an achievement in it's self. Heady days.
So bring on the men from the Galpharm in front of what will be a sell out at ER on Saturday. All but 40,000 for a Division 3 game is fantastic and yet again we will have teams way above us in the football pyramid green with envy...................but you don't win any silverware for having the best support in the world..........if you did we'd have a trophy cabinet the size of Tesco's!
In Grayson we trust
MOT

Posted by Andrew Butterwick at 19:04