It's been a strange week since the Kettering game. After saying that the Kettering game was one of the weirdest games of Football I've ever watched. One minute we were playing shots in and wondering how many goals we'd get the next we were biting our finger nails praying to the lord almighty that we didn't have to endure the torture of penalties and then we won 5:1! Bizzare.
Not as weird as the next morning though. Dashing onto Selby station for the commute into Leeds and I noticed a passenger having a "heated debate" with the ticket man. Just a minute he was wearing a Leeds scarf and a Bench jacket? Yes it was Turkey Twizzler still trying to find his way home to Hull from Elland Road...............at 8am the following morning! The fact that he didn't have any money for the fare was the sticking point. Once I'd helped him out with that I got an interesting tale of a missed train, a night trying to sleep on the station before finally ending up as a guest of the local boys in blue! All that and a mighty hangover. Mmmmm. 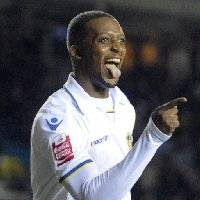 At work I found myself defending a 5.1 victory to the resident Huddersfield Toon fan, who thought we were rubbish and "wouldn't have scored if we played til midnight" Just in case he'd switched over for "News at Ten" I reminded him that we "didn't" score 5 times before touching on Huddersfield's sudden likeness to KK's Lemming like Newcastle side. That brought him nicely on to how lucky we were to come out with a point against the Toon. Mmmmm The more we practice the luckier we get I observed. Hey Ho.
Tomorrow we have a trip to Griffin Park the home of mighty Brentford. Needless to say I've never been their before so it will be another ground ticked off the bucket list which is getting shorter and shorter as each season goes on. Brentford will be tough at home (can't believe I've just written that) so once again our strong squad will be tested to it's limits. Hopefully, please, please, please, Higgs and Kissy will be back to restore some of the missing authority to the centre of our defence just in time for the hectic programme over Xmas. After our recent generosity in front of goal in the last few matches, not least against Kettering, I hope Lord Grayson has had the boys on shooting practice all week. He clearly wasn't a happy bunny on Tuesday with the way we seemed to cede some of the advantage back to Kettering in the 2nd half and our unwillingness to kill teams off when they are on the ropes could yet come back to haunt us this season.
Tickets for the game with Salford Yanks went on sale this week with the usual difficulties in either getting time away from work or actually getting on the Leeds website to buy tickets adding to the normal frustrations of the day. Thankfully ours are now safely confirmed and the inevitable build up to the game will begin. 8,500 whites fans in the Theatre of Shite is definitely enough to raise the roof with choruses of MOT etc.....................and when we score a goal, which we will, the place will explode. Just hope the team keep focused on the games in between and don't let thoughts of the cup spoil our league record.
Early start again tomorrow from Selby station. can't wait.
In Grayson We Trust.
MOT
Posted by Andrew Butterwick at 20:46