News that my partner in crime, the Happy Chocker, had to work down the big black hole instead of trekking to Brentford to watch the mighty whites put a dampener on the start of the day. However upwards on onwards I set out from Selby station with Welly and his crew for company.
It was Leeds' first trip to Griffin Park for 50 years and against a team that have held firm at home but wobbled on their travels a tough task lay ahead. After the compulsory drink in O'Neills on Euston Road I made my way to West London with Beefy and Pip and soon found myself in one of the four pubs that mark each corner of Griffin Park. Slightly bigger than my lounge at home it was a bit of a squash to say the least as familiar Leeds fans packed in. The Wakey Warriors made a blatant play for a picture to enjoy their two minutes of fame and on the big screne a Wigan player was embarrassing the Stoke goalie by launching a free kick from inside his own half over his head into the net. The pre match anticipation was high. 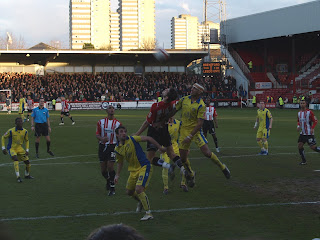 Inside yet another compact, but tidy ground, the Leeds players got the usual warm welcome from the 1800 away following as the game got under way. Kissy had thankfully returned to the defence and Hughes dropped into the RB berth with Mad Max gaining a rare start on the right midfield. The match opened at a frenetic pace with Brentford keen to show why it's so difficult to prise 3 points from them at home. Almost immediately Kissy was showing why he is such a rock at the heart of the Leeds defence by commanding his troops with authority and heading anything that moved away to safety.....................bliss!
Leeds didn't have it their own way in the first 15 minutes as they had to hold firm to keep the eager whipper snappers from West London at bay but it was the much maligned Jermaine Beckford who drew the first whiff of excitement as a thunderous drive was touched onto the bar by the home keeper. This raised the confidence level in the Leeds camp and they started to get some sort of control of a game that was played at 100 mph. Not pretty to watch the whites fans tried to lift the quality with a continuous wall of noise as they got some practice in for the trip to the Theatre of Shite in the new year. In the home stand the Thames Valley Whites were upsetting some home fans having bought some hospitality tickets and joining in with a chorus or two of MOT.
Back on the pitch Leeds were huffing and puffing put not quite getting into top gear. Capaldi was not doing anything to quell the growing feeling that he's not the best loan signing we've ever made as once again he struggled to cope with 3rd Division football. An underwhelming first half came to an end with Casper not having made a save and Leeds only testing the unpronounceable home goalie a couple of times. Maybe the Happy Chocker knew something I didn't?
Half Time was exciting as 1800 Leeds fans all tried to use the small toilets at once! Improvisation was the key as everything from the turnstile cubicles to the perimeter wall provided much relief. 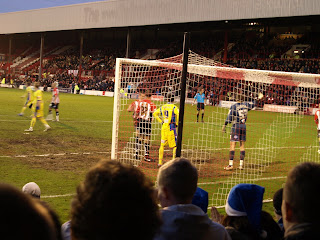 Leeds were attacking the end their fans were housed in the 2nd half and came out of the traps with some vigour. Kilkenny was to the fore as chances started to come..........and go. Howson went near and a Beckford header went safely into the hands of the goalie. Leeds' tactic of trying to get the ball behind the Brentford back line should have paid dividends as Beckford darted through onto a ball from Howson...............he must score with only the goalie to beat.............but a rather tame attempt to slot the ball through the goalie's legs summed up the day. Minutes later another through ball breached the home defence and as Beckford glided past the last man he was downed by a stray red foot. the away fans bayed for a red card as the less than capable referee bottled the decision and waved play on. That was the minute that I realised today was going to be one of those days, one thankfully we've seen very few if any this year though. We did threaten the home goal, Becchio grazed the bar with a lob come shot, but all too often the final shot or pass was not up to scratch. Kandol joined the fray, to the tunes of his comparison to a Brazilian skillful person, but even his penchant for scoring late goals passed him by. The usual last hurrah by Leeds was a damp squib and the game finished as it started goalless. As the ever critical Leeds fans streamed away the word rubbish was heard more than one time as the game was discussed for a few nano seconds. This game will not live long in the memory. the league table still looks good despite other results going against us. Some obnoxious Evertonians on the train home added to a downbeat day.
The positives of the trip were Kissy's commanding return and yet another clean sheet (with Casper in between the sticks) and another game unbeaten...............Oooh and we're still top of the league. Maybe not a bad day after all. And we've always the trip to Goodison to look forward to next year?
Stanley on Tuesday in the Paint Pot Trophy. Are you watching Bumble?
Can't wait.
MOT

Posted by Andrew Butterwick at 08:26