So after indifferent performances at Exeter and against Carlisle we were back to the magic of the cup and our visit to White Hart Lane. Seemed a bit odd travelling down to the game and listening to commentaries on the games that kicked off at the more civilised time of 3pm but as TV schedules dictated that we kick off at Saturday tea time needs must. Big Steve, GB Happy Chocker and the Quiet One made up our compliment in the car heading towards Ponders End. After a couple of pints in a local hostelry we made a short hop by train to Northumberland Park and White Hart Lane.

Much debate amongst Leeds fans this week on the distractions of chasing glory in two cup competitions and the possible impact on our No 1 goal of getting promoted out of Div 3. News that the Canaries had scraped a win to knock us of our perch at the top of the league didn't detract from the building atmosphere in and around the ground as another massive Leeds away following marched defiantly into North London. This was going to be another cup tie that would have the traditionalists drooling. An underdog 41 places below the expectant home team, a packed stadium absolutely crackling with anticipation and two teams that were prepared to go at each other hammer and tong for 90 minutes........or maybe 95?
Once we were took our places high up in the South Stand it was clear this was going to be an occasion to remember regardless of the result. The noise tumbling down from the away stand was deafening. We were definitely here to party.
Lord Grayson had changed his team and gone with 5 in midfield leaving Beckford up front . Naylor was missing at the back as the dependable Bromby slotted smoothly in alongside Kissy. Optimistic noises from our group of a 2:1 win for the whites were driven more by the intoxication of the pre match atmosphere rather than pure football logic.........but who cares?
A radio commentator rashly predicted that "all tomorrows headlines will about Rooney's 4 goals" in some other League match that had been played..............a comment he was later to regret! 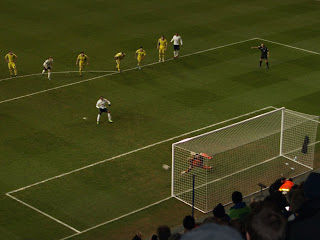 The match kicked off and Spurs, fielding their strongest team, came out of the blocks like a team possessed as they went immediately for the jugular. Attacks rained down on the resolute defence and like a punch drunk boxer Leeds struggled to clear their heads and cope. The cocky Defoe tested Casper with an audacious lob that the great Dane tipped over the bar. But with Kranjcar and Crouch marauding with intent and Hutton and Bale raiding the flanks at will Leeds were in danger of being swamped before they drew their first breath.
The referee seemed to like what he saw and gave a string of decisions that showed his liking for the aristocrats of North London. No more so than when he gave a harsh penalty after Rose was clumsily felled in the box. Step up Casper to inspire the defensive effort with a superb save from Defoe's resulting spot kick. You'd think we'd won the cup with the reaction around me in the stand.
Leeds are nothing if not determined and they manned the ramparts of their defensive citadel with a passion that was borne of sheer pride in the shirt. It was reminiscent of Rourkes Drift as we repelled wave after wave of attack with Kissy desperately organising his troops akin to Michael Caine's efforts in the Zulu film. I could almost hear a chorus of "Men of Harlech" drifting up form the pitch!
Leeds weathered the storm though and began to carve out chances for themselves. Snoddy's role playing in the hole behind Beckford was working and Killa started to get more possession. Snoddy turned and twisted and then pulled a fine save from Gomes before Beckford spurned an excellent chance as he snatched at a shot from 15 yards out. Better was to come as he then tested Gomes with a sweetly hit volley. Leeds had made Spurs sit up and notice and began to purr in midfield with impressive passing movements that must of made any watching Exeter or Carlisle fans wonder if Leeds had imported a different team to the one that capitulated to them.
As the game headed for half time Spurs got the opening goal. Not for the first time Bale caused havoc down the left before pulling back an intelligent ball for the elegant Kranjcar to fire in a shot that Casper could only parry out to the Rodders lookalike Crouch. 1.0 Spurs. Harsh.
The first 45 minutes had gone in a flash. I had already lost my voice as the Leeds fans showed the Premier League prawn sandwich munchers what proper away support sounds like! Anyone still think we shouldn't be bothered about the cup? No didn't think so.
Leeds started the 2nd half on the front foot and when Snoddy launched a corner into the box early in the half Bromby stuck out a foot.............the ball bobbled in front of Gomes............quick as a flash Beckford turned like a breakdancer to steer the ball over the line. Absolute bedlam amongst the Leeds fans as our cup dream was reignited by our cup talisman Beckford. Once we'd recovered our breath Jermaine's name was ring round the impressive stadium in adulation from the massed ranks of Leeds fans. Now you wouldn't have believed that three weeks ago?
Although it didn't seem possible but the away fans lifted the decibel level to another notch as Leeds fed off the support and smelt blood..........the Zulu's retreated........and Leeds started to impress not only Spurs but also the TV audience as they confidently stood toe to toe with the their Premiership superiors.
Now Harry Redknap might get a bit confused filling in his self assessment tax form but he knows a thing or two about football. He could see the game slipping away so he made a telling change. Following the introduction of Palicios, Crouch and Krnjcar were replaced by £40m pounds worth of substitutes in Keane and Pavlyuchencko. Ex Leeds man Keane received a warm reception from the Leeds fans which he showed his appreciation, "He's Leeds and he knows he is" raised a smile from the irishman's face. 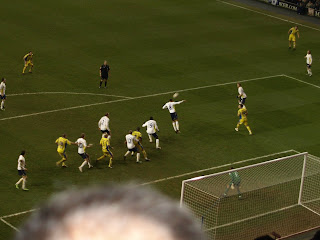 The impact of the change was immediate. Gone was to high ball to Crouch to be replaced by neat, swift passing that cut through Leeds' tiring defence. The Zulu's had regrouped and were planning their final attack.
Within minutes Spurs were back in front after a Premier class move finished with Pavlyuchenko steering the ball past Casper. before Leeds could draw breath the game appeared to be over as Bale found Keane who headed the ball apst Casper into the net. Game over..................Keane didn't celebrate, top man, even before he realised he'd been flagged for offside. Spurs continued to pile forward looking for the killer goal...........very pleasing to the ITV editors and neutrals but probably not the best tactic. Leeds continued to battle to the last man in defence and the fans continued to stake their claim as the noisiest and most passionate fans in the land. 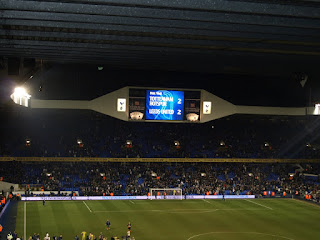 5 minutes Fergie time was announced. Even though most Leeds fans had accepted the defeat and we'd put up another terrific show the players hadn't. Then something strange happened. In a scene that would have looked far fetched in a "Roy of the Rovers" story Jonny Howson picked the ball up deep in his own half, just like Old Trafford, looked up and pinged a 40 yard ball to Jermaine Beckford, just like Old Trafford, Beckford this time controlled the ball better............a simultaneous gasp of hope came from the Leeds fans...........Beckford took on Dawson who rashly dived in to take the man and ball....................for what seemed like 5 minutes Alan Willey thought about the decision before pointing to the spot........penalty! Unbelievable. But we haven't converted a penalty since Billy Bremner was a teenager so we surely we would miss?
Up steps Jermaine Beckford, dusts himself down a calmly smashes the ball high into the net! Carnage in the stands as bodies tumbled over seats and and dance on top of them in unbridled celebration of a stunning 95th minute equaliser. The magic of the cup is alive and well and as the final whistle blew the Zulus retreated in begrudging respect of a worthy foe as the travelling fans gorged themselves on yet another cup shock at the table of a top Premier League team.
The whole team returned to the pitch for a lap of honour in front of their adoring fans. Fantastic.
So we are in the velvet bag for the 5th round draw, Arsenal away would be good, but first another replay. Far from taking our eye of the promotion goal this draw that feels like a victory should give the team momentum. At times we matched and bettered our illustrious rivals as we did at Old Trafford. This team deserves to be in a much higher league and with Grayson at the helm that seems assurred. The Grayson decade has started well.
Back to reality on Tuesday night and the long trek to Swindon and hopefully back to the top of the league. Cant't wait.
MOT

Posted by Andrew Butterwick at 10:03