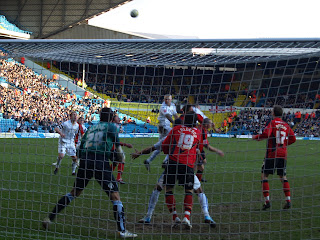 a crucial goal. if we had lost, the crowd would have turned big style. it's bought some time, and might be one of the most important goals of the season. I hope.

Think you may well be right on that one.
MOT

Dear Marching on Together

I am a season ticket holder like your self but unable to attend away games with lack of money.
I enjoy reading your match reports because you say what you see and unlike official match reports you write accurate and solid reports.
Id like to hear what you think about the booing, i totaly dissagree with the booing because its just going to make the confidence of the players even lower.
What do you think is behind our loss of form?
Leeds fans need to start beliving again, were 3 points from the top with a game in hand, 2 wins and were right back in it.
Keep it up with the reports.
MARCHING ON TOGETHER

Ben,
Thanks for the comments. i too think the booing is pointless and stupid. Just can't understand how the wheels have come off so spectactularly. The next three games could well define our season. If we don't win two of those we will be in the play off mix and then anything could happen!
Regards
MOT