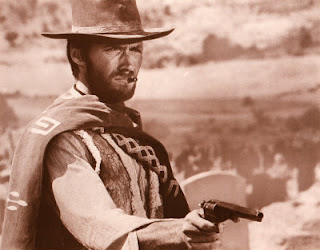 Tumbleweed blows across the street and worried residents peer from behind twitching curtains as the Mighty Whites ride into town with their ace gunslingers "Lazy Beckford" & "Bullet Head Becchio" Out of a dusty saloon step "Lucky Lambert" & "Bad Boy Barnard" nervously fiddling with their six shooters......................game on!
What happens next we'll find out at 3pm tomorrow as the League's top individual scorers go head to head in the mouth watering clash at St Mary's. Beckford and the two Southampton strikers are locked at the top of Leagues 1's strikers table on 21 goals a piece after Jermaine's brace on Tuesday. With Beckford running into his best form of the season he will fancy himself to be the last man standing when the final whistle is blown on Saturday tea time. His play has changed as we saw on Tuesday. Gone are the outrageous flicks and tricks that only come off every Easter to be replaced by good ball control and intelligent lay offs when he's got his back is to goal. It seems to me that the much maligned Mr Dickov (she said Yes Dickov) may be exerting his considerable experience on our talisman striker. I don't think it's coincidental that Becks style of play has changed at the same time the waspish Scottish striker has arrived on the scene?
But Leeds are not a one man team and this mini unbeaten run we are on, now 5 games don't forget, has been graced by sterling performances from Howson & Doyle in the boiler room, Kissy and Nayls at the back and the slowly improving McSheffrey on the wing. Aidey White has added a youthful spurt of energy at left back and the veteran Dickov is lurking with intent on the bench. Leeds are now sat in the ideal position for the final run in like a Grand National runner sat on the shoulder of the front runner as we approach the final fence and the extended run in. Lord Grayson is steering the ship through choppy waters with grit and nerves of steel, the like of which we haven't seen in the manager's chair for a long time.
Southampton are seen as the one of the top three teams in this league but their league position doesn't reflect that. A combination of a points deduction, distinctly below average early season form and occasional slip ups of late have left them with a mountain to climb if they are to get into the play offs. They are currently 16 points adrift of the play offs with 13 games to play which is a big ask but one they will think is achievable as some of the play off teams stutter.
So all is set for a cracker at St Marys. Leeds have 11 games to go now and are 5 points clear of Charlton. A point against the Saints will be a good return for the long trip to the South Coast but 3 is on the cards if they sit back and let Leeds play. One thing for sure there will be another electric atmosphere inside the stadium. Last time we were there we lost 1.0 during the final throes of our Championship life...............revenge is in the air! Make sure you make your bullets count Bullet Head and Lazy so that HC, Beefy, the Quiet One and MOT can hit the trail home happy!
You know what?
Can't wait.
MOT
PS match report will be up from 11am Sunday tweets
Posted by Andrew Butterwick at 08:02