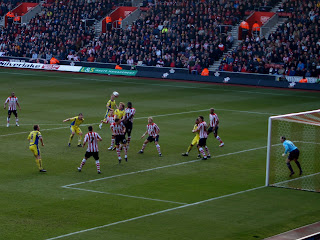 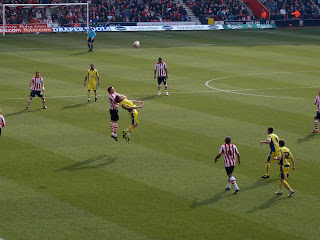 Watching Leeds at Southampton cannot be done without a certain amount of pre planning and organisation. A 540 mile round trip is not for the faint hearted and when your car breaks down before you've gone 10 miles then it takes a special kind of commitment to the cause to complete the trip. So when Jamie Skelton, aka Turkey Twizzler, rang to say smoke was pouring from the engine of the car he'd blagged a lift in you'd assume that was the end of his away day..............No Turkey somehow got back to the train station and bought a full price return to Southampton and made it to the match in time, albeit £110 lighter. Ouch! Meanwhile Happy Chocker, Beefy and The Quiet One were hurtling down the M1 en route to St Mary's. The usual quizzes kept the car amused for many a mile intermingled with updates of Turkey's expensive progress courtesy of Hull Trains.
On a typical match day we often see Team buses on their way to matches so you would think that seeing Darlington's players on their way to their game with Northampton Town was somewhat unremarkable............................other than they were in a rusty 16 seater mini bus with Steve Staunton perched in the front window! His career does seem to have taken a downward dip of late?
We arrived in Southampton in good time giving us time to reflect on our chances for the game. Mostly positive utterances were coming from my companions and with my always optimistic input things were feeling good. A point would be a good result and a win a bonus against one of the better sides in this god forsaken League.
A packed stadium greeted the two teams as they stepped into the afternoon sunshine. The travelling army of 2500 whites fans were in good voice as the game got underway. To say Southampton dominated the first 20 minutes would be an understatement. Alan Pardew is a shrewd manager and he had clearly done his homework as the Saints wasted no opportunity in targeting young Aidey White with their potent weapon Jason Puncheon. We were witnessing a total demolition of a young players confidence as he was torn to shreds by the lively winger. Chances were a plenty at both ends as Beckford shaved the post with a screamer and McSheffrey drilled a 30 yard goalbound free kick into Becchio's mid rift. But it was at Casper's end were the most danger was surfacing. Kissy had to scramble the ball clear after the Dane had parried a stinging shot as the Leeds defence creaked. They hit the post with Casper beaten. This wasn't going to plan. Where Leeds were struggling to get hold of any decent possession the Saints were knocking the ball about with style. That sickening feeling in the pit of my stomach started to grow.
On 25 minutes it got worse as Leeds' nemesis Dan Harding once again upset the Leeds faithful as he slotted home a cross from Puncheon. It was no more than Saints deserved.
Truth be known they could have been 3 up at half time and only the most blinkered Leeds fan would have argued. They had a goal disallowed that looked good and with White suffering at the hands of Puncheon Leeds were on the canvas. The hard working Hughes kept Leeds in the game with a last ditch clearance after Casper was overwhelmed. Half time couldn't come soon enough.
Lord Grayson did the sensible thing and removed Aidey from the fray and brought on Bromby to shore up the leaking defence.............and to good effect. It's difficult to see how White can be given the full back slot again after this game.
To their credit Leeds did grind their way back into the game as the 2nd half progressed but possession was given away far too easily for Leeds to take a stranglehold on the game. Kilkenny came on for McSheffrey and immediately Leeds passing improved 100%. This was his type of game. Saints looked dangerous as they broke and I felt that a 2nd goal was likely but Kissy and Nayls held firm. Many arguments amongst fellow Leeds fans were erupting around me. McSheffrey's shite.................Beckford's crap..............Howsons awful.....................that's it lads let's get behind the team in their hour of need!
As the game entered the last 10 minutes Mad Max replaced Becchio...................strange with Dickov on the bench? But as of late he failed to make much impact. Even 5 minutes of added time couldn't help us. Poor finishing and shooting summed up our afternoon not for the first time this season.
So after the euphoria of the win at mighty Tranmere this defeat hung heavy as we made our way back to the shuttle bus and finally the car past the celebrating Saints fans. Most of them wanted to show how clever they were in remembering the score by making a 1.0 sign with their hands, bless.
Other results went well for us below............big thanks to Millwall for stuffing their local rivals Charlton but Norwich took full advantage of our slip up to extend their lead to 7 points. Only 10 games to go now with the next 3 against Millwall, Norwich and then Swindon March is turning out to be the defining month of our season. Steady nerves are needed and the ability on the field to retain possession and convert more chances as we enter the final furlong is essential. I somehow think this is going go right down to the last game of the season before the 2nd automatic promotion spot is settled. I can't bare to look!
Millwall next at ER a week on Monday. Should be a cracking game. Pity it will be on a Monday night in a half empty stadium. TV will keep a lot of fans away. Not this one though.
Can't wait.
MOT
I know its not yesterdays highlights but......see if you can spot yesterday's goal scorer?
Posted by Andrew Butterwick at 23:41