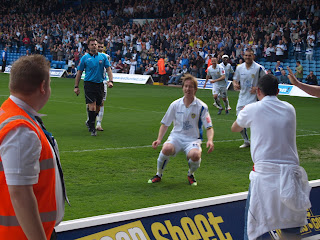 Swindon v Exeter tonight, Charlton v Colchester, Yeovil v Millwall & Leeds at Carlisle tomorrow night complete another fascinating round of matches in the battle for the 2nd automatic promotion spot.
Things couldn't be much tighter at the top with Millwall now in the box seat but any slip up at the home of the Glovers will let Leeds or Swindon back into the precious 2nd spot.............assuming one of them conjure a win out of their testing games. With still only 4 points separating the 4 teams scrapping for the last automatic spot and just 5 games to go it's highly likely that the final Saturday of the season will be one of high drama. All Leeds can do is keep winning and make sure that they are still in the mix come 3pm on 8th May.
Of course the big debate after Saturday's win surrounds Jermaine Beckford. He infuriated fans in the South Stand on Saturday by responding with an obscene gesture to the barracking he got for not challenging the Southend keeper. When he was substituted sections of the crowd cheered. This is a player who has scored a precious 26 goals from 45 starts for us this season including famous cup goals against Manure and Spurs. To me it's a sad state of affairs, yes he is a frustrating player to watch at times and he clearly has been way below par for a number of weeks. I was surprised that he started on Saturday and don't expect him to kick off the game at Carlisle. I believe he know's he's not been playing well and part of that is that opposing centre halves have sussed he doesn't like it "up him" as Corporal Jones would say. Proof of that theory is the way that Oldham's lumbering dinosaur Sean Gregan is able to snuff him out with a continuous stream of verbals followed by some timely kicks, elbows and digs.
So whilst I think he will have to be content with warming the bench for the next couple of matches I think that will work in his & the team's favour. He needs to be out of the firing line for the sake of his own confidence and the effectiveness of the team..........but don't rule out him still having a big say on our promotion hopes. Him coming off the bench against tired legs for the last 15 minutes could be a very potent tool in the forthcoming matches.
With Gradel firing on all cylinders and a rejuvenated Becchio up front we should have enough fire power to trouble Mr Harte and his merry men. Just hope a defence inspired by Neill Collins can keep a clean sheet and the midfield play as they did in the 2nd half of the JPT tie. Predictions? 1.0 nervy win for Leeds me thinks.
So another sold out away allocation will be treking to the wilderness of Cumbria to see the mighty whites tomorrow. Crowd control will be under the spotlight after the farcical scenes at the end of our last visit in the JPT semi final but there should be no problems this time. The home fans will be skulking away as we celebrate our 3rd successive win in this 8 game season.
If that's the case then we will be well set for the final 4 games. The pressure's building with every game now. No blinking Leeds. Seat belts fastened. The next 5 games could well define Lord Larry's career. Not for the faint hearted.
Can't wait.
MOT
Posted by Andrew Butterwick at 18:30